Most of the time I'm able to keep some sense of humor about the crazy stuff that is the inspiration for the lion's share of my blog posts.  However maddening the illogic, however infuriating the ignoring of evidence, however baffling the stretching of credulity, I usually can find some way to put it all in perspective, to shake my head at the silliness and then move on.

But sometimes, I find something that galls me so deeply that I can't even find an angle from which I could poke fun and lighten it up.

That's the way I'm reacting to the conspiracy theories that have sprung up following the death of actor Paul Walker. 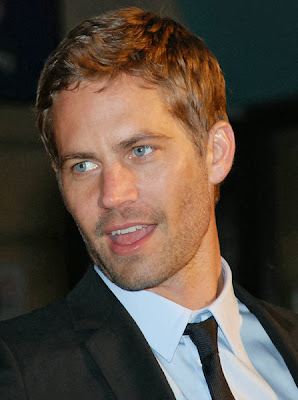 (Photograph courtesy of André Luis and the Wikimedia Commons)

Walker, best known for his roles in action flicks like Fast & Furious, died Saturday in a fiery one-car crash that also took the life of Walker's friend Roger Rodas.  Given Walker's penchant for fast cars and parties, it seemed like there was nothing more to it than a fatal recklessness -- an explanation supported by the discovery at the site of tire tread marks that seemed to indicate that the car had been doing doughnuts prior to the crash.

But that's not enough for the conspiracy theorists, is it?  No, of course not.  It never is, somehow.  It's not sufficient to let Walker's family, friends, and fans mourn his untimely death.  These vultures have to capitalize upon it, grab the notoriety and run with it, use it as leverage for promoting their bizarre, counterfactual view of the world.

In that way, they're a little like the Westboro Baptist Church, aren't they?  "The government is trying to kill us all" is just a little more PC than "God hates fags," that's all.

So, what are they claiming?  Well, take a look at this page on Before It's News, a site already well-known for promoting "truthers" of various stripes.  This time, it's "Paul Walker: Murdered for Digging Too Deep?" by Susan Duclos, which makes the claim that Walker was murdered by the government because he was about to blow the whistle...

... because he'd found out that the United States is secretly putting birth control drugs into food shipments destined for hurricane refugee camps in the Philippines.


Paul Walker and his friend were killed shortly after they discovered a conspiracy to supply victims of Typhon [sic] Haiyan with a prototype permanent birth control drug hidden in medicinal supplies and food aid. They had a damning recording and they were on their way to rendezvous with an ally who would have helped them get in touch with the right people. Turns out they were betrayed and someone rigged their car’s breaks [sic] to malfunction after a certain speed.

Now that the loose end has been tied up, and the recording destroyed, the people responsible have nothing to fear as this will become another “conspiracy theory” no one will take seriously.

You know, there is a reason, sometimes, when people don't take you seriously.  It's what happens when you propose insane idea after insane idea, each time claiming that this is the time you've found the smoking gun.  It's what happens when you predict electrical grid failures, government collapses, assassinations, mass arrests, and releases of bioengineered plagues, and none of it ever happens.

It's what happens when you prove, over and over, that you are nothing more than an unethical, loudmouthed, bullshit-spouting crank.

And yet, bafflingly, conspiracy theories are gaining traction.  Like the hydra, you strike one down, only to find nine more in its place.  Argue one follower away, and others jump into the fray.  Look, for example, at some of the comments on Duclos' piece:


It’s interesting that the big web searches are reporting the story, but not including any pictures nor video footage, when clearly their available. Furthermore, the weather conditions were fine, not a factor, the people driving the car were professional racers, yet they can’t even handle a turn- going from A to B? But what makes me the most suspicious is considering to damaged to the car…I’m sure the occupants where completely unrecognizable, yet they positively identified Paul Walker on the spot? How exactly? How’d they know that he personally in the car? With the fire and everything, his face, his ID would have been damaged beyond recognition…Yet the story came out within the hour of the accident, positively identifying him as there. My gut feeling is that he wasn’t in the car, I don’t know where he is, this doesn’t make sense… Geez, this horrible.

This crash has all the same features as that journalist who was murdered recently. the one who said he was working a a huge story and would have to lay low for a while …refresh my memory re. name. Now according to this story the motives are almost identical as well.

If that's not disheartening enough, there's the alternative explanation on Truther News -- that Walker was killed by an "Obama drone strike."


I probably shouldn't let it get to me.  But for crying out loud, two guys died here.  It was an accident -- one of those stupid, reckless, tragic accidents that ended two lives forty years too early.  One of those things that happen because life is risky, and because humans, even famous and popular and handsome ones, sometimes do stupid things.

And that was all it was.  So conspiracy theorists, hear this: let their friends and family grieve, and stop spinning your stupid fucking webs of fantasy around Paul Walker's grave.
Posted by Gordon Bonnet at 2:11 AM