We found Noah's... no, listen! Wait! Where's everybody going?

Have you noticed that every few months, someone else finds Noah's Ark?

Just since I've begun this blog, I've written about four attempts, one of them "successful" (at least in the sense that the people running the expedition found some random rotting pieces of wood and declared victory).

Well, here we go again.  We now have another "successful Ark discovery," with the added filigree that there's a government coverup designed to prevent our finding out about it.  This should be fun, yes?  Religious whackjobbery + conspiracy theories = WHEEEEEEE!!!!!

This story, which has been making the rounds of social media, is described in some detail in the article by Mark Martineau entitled, "Noah's Ark Has Been Found.  Why Are They Keeping Us In the Dark?"  Here's a quote from the article that explains the gist:


In 1959, Turkish army captain Llhan Durupinar discovered an unusual shape while examining aerial photographs of his country. The smooth shape, larger than a football field, stood out from the rough and rocky terrain at an altitude of 6,300 feet near the Turkish border with Iran...  Capt. Durupinar was familiar with the biblical accounts of the Ark and its association with Mount Ararat in Turkey, but he was reluctant to jump to any conclusions. The region was very remote, yet it was inhabited with small villages. No previous reports of an object this odd had been made before. So he forwarded the photographic negative to a famous aerial photography expert named Dr. Brandenburger, at Ohio State University.

Brandenburger was responsible for discovering the Cuban missile bases during the Kennedy era from reconnaissance photos, and after carefully studying the photo, he concluded: "I have no doubt at all, that this object is a ship. In my entire career, I have never seen an object like this on a stereo photo."

We are then told that some folks investigated, but found nothing too spectacular.  Then a guy named Ron Wyatt decided to take a more thorough look at the site, and after his study, "The evidence was conclusive.  This is the Ark of Noah." 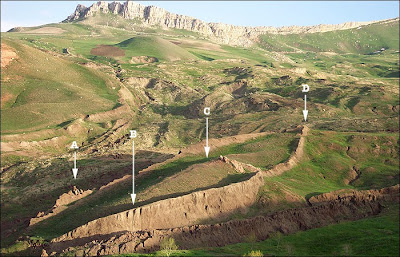 What evidence, you might ask?  Well, we have "traces... of wooden ribs":

We have "high-tech metal rivets":

We have "stone anchors":

Not to mention a plethora of other goodies, such as cat hair and fossilized animal poo.

But then Snopes got involved, predictably debunking the entire thing.   Most of the claims were outright false; there were no petrified wooden ribs, no exotic metal rivets, no subsurface features that look even remotely ship-like.  The animal poo is hardly unusual, given that animals do that.  And even a guy from Answers in Genesis, one Andrew Snelling, concluded that the site is natural geological feature caused by faulting, albeit a kind of peculiar-looking one.  (You should read the entire Snopes article for a piece-by-piece takedown of the claim.)

But so far, there's nothing much to separate this from all of the other times people have found Noah's Ark.  That's because you haven't heard about the conspiracy theory aspect.  "Ordinary people are hungry for this information, yet the organizations responsible to disseminate these facts seem to have an agenda to keep us in the dark," Martineau writes.  "This is especially true when it comes to our ancient human history."

Yup, I'm sure that the powers-that-be spend all of their time trying to figure out how to keep the average citizen from finding out about the Code of Hammurabi.  Makes total sense.

But apparently, that's not all that the powers-that-be are trying to do.  If you take a look at the comments on the original site (Not directly!  Always use eye protection!), you'll see that apparently everyone is lying to us, especially Snopes.  Here are a few examples, as many as I was able to copy before the neurons in my cerebrum started whimpering for mercy:


After [Snopes] said that Obamas Birth Certificate was real...All their credibility was out the window

it a proven fact science does not have all the answers.

I don't use MY real name and I have a picture of Obozo getting ready to masturbate (what he always does right after burning the Constitution that he was HIRED TO PROTECT!). My reasoning is this... if Obozo's Mooselick Booboohood retards saw my REAL face, I would have to spend all my time killing the punk ass wannabe ragheads they send to behead me for being a TRUE AMERICAN PATRIOT... killing them in self-defense, of course. Not EVERYONE is stupid enough to put their real face out there where Satan's Minions (spelled MUSLIMS) can lock in on them. Enjoy your eternity in Hell that you will deserve for following Satan's Spawn Osama Obama!

Snopes is a propaganda tool of the far left!

Snopes has been discredited for producing any truth. Wake up and smell the Communism.

Yes, it IS good that previous commentor wasn't born in the islamic world of murdered and taken-over populations and destroyed cultures. That is why islam has spread all over the world, as it is spreading more by murdering Christian populations that have lived in the middle east for hundreds or thousands of years. Thanks all to OUR islamic communist puppet regime's support of money and weapons. But don't worry, it isn't only Christians being murdered, but those of the far east too.

So, I only have two questions about all of this: (1) what the fuck is a "Mooselick Booboohood?" and (2) do the people who comment on sites like this talk this way in real life?

Because if they do, I'm surprised that their loved ones don't stage an intervention involving the administration of horse tranquilizers.

The whole thing is profoundly unsettling, especially given that Snopes has a pretty good track record of establishing fact from fiction, and that there are people who think that the logical next step after "science doesn't have all the answers" is "so the bible must be literally true."  The problem, of course, is one we've seen before; if you can be duped into thinking that the facts are spin, and that the scientific method itself is invalid, you can be convinced of anything.

In any case, it seems pretty unlikely that this rock formation in Turkey has anything to do with either Noah's Ark or government coverups.  Which is a relief, frankly.  Because we've got to get this one debunked in order to make way for the next one.  Only one Noah's Ark allowed at a time, you know.
Posted by Gordon Bonnet at 4:44 AM