The conspiracies have been coming hard and fast lately.  I'm finding it hard to keep up with all of them.  We have all of the "false flag" operations (from the various school shootings to the death of actor Paul Walker), assorted weather phenomena that clearly are man-made (such as this week's polar vortex event), and miscellaneous accusations of Top Secret Scary Stuff (like what I dealt with in yesterday's post, which was the hidden agenda at CERN to use the Large Hadron Collider to resurrect the Egyptian god Osiris).

Which brings up an interesting question: if you're a conspiracy theorist, are you required by the bylaws to believe in all of them?  Or do you pick and choose?  Are there some ideas so idiotic that even Alex Jones would say, "Naw, that's just ridiculous"?

Because if the latter is true, I think I may have found the odds-on favorite.  Jim Garrow, an "Obama birther truther" and general wingnut, appeared on a radio show a few days ago hosted by Fox News contributor Erik Rush, and in an interview that should win some kind of award for sheer bizarreness, told us all about how President Obama is part of a secret plot.  He's upset by his decreasing approval ratings, and he's found a way to remedy the problem.  And that solution is to sell us out to aliens and Canadians.

No, I'm not making this up.  Here is a direct quote:


What we’re going to be seeing soon is the unveiling of the concept that we have, in fact, been contacted and have been in communication with people from other civilizations beyond earth, and that will be part of the great deception...  It’ll be a great fraud, the whole basis of this, it is a great hoax.  Obama and Canadian Prime Minister Stephen Harper have signed an agreement to assist one another militarily in the event of an insurrection.  Now we’re bringing in a new element, a group of people who could be armed and could be in a position to shoot American civilians who have never sworn allegiance to the Constitution.  I don’t know where that would fit with respect to the Chinese and Russian, who happen to be here under whatever guise, whether it be training or sharing of information, who knows what they might be in place.  But it opens up a pretty scary scenario.

Amazingly, Rush didn't immediately call in his assistants to have Garrow forcibly brought to a mental institution for evaluation.  He just said, "Wow."  And Rush's other guest, Tea Party commentator Nancy Smith, said, in a serious voice, "Personally I’ve already heard some other sources saying the very same thing that you’re saying."

Seriously?  We're being sold out to the Canadians?  Who are going to come over and shoot up the place?  You do know that you're referring to the single most courteous society on Earth, right? 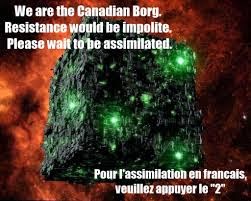 But no.  Rush et al. just kind of sat there and acted as if what Garrow said was completely normal.

Oh, and I forgot to mention that in previous appearances on Rush's show, Garrow told us how he also believes that President Obama ordered the murders of Andrew Breitbart, Michael Hastings, and Tom Clancy because they'd all figured out that Obama is a Saudi operative and were about to blow his cover.  And that if that didn't work, he was going to give up the subtle approach, and just drop nuclear bombs on Charleston, South Carolina, except that three of his military leaders talked him out of it, so he fired them.

Man, that brings "no more Mr. Nice Guy" to a whole new level, doesn't it?

Seriously, folks, what does it take to stop people from listening?  Are there really individuals who are that gullible?  I'm pretty certain that Garrow himself is simply insane; but in order to keep appearing on Erik Rush's radio show -- which presumably has sponsors and listeners -- someone has to be paying attention, and believing this guy.

Which worries me.  Because these people vote.  And if people like Garrow keep getting spots on the public airwaves, it's providing an avenue for distributing their craziness, and simultaneously giving it a veneer of credibility.  I mean, we have enough ways to spread stupid ideas out there, what with how easy it is to simply click "Share" on social media, without radio talk show hosts giving paranoid loonies a forum.

But I guess I should look at the bright side; even if Garrow's right, I'd take my chances with the Canadians over people like Michele Bachmann and Louie Gohmert.  Even if they passed a law mandating that we switch from Big Macs and milk shakes to poutine and beer, the Canadians have a national health care system, they're the country that has the highest number of citizens with advanced degrees, and they're the world's largest producer of cheese.  So they must be doing something right.

So I say what the hell.  Let the Canadians take over.  They couldn't possibly screw things up any worse than we're already doing.
Posted by Gordon Bonnet at 4:38 AM