I'm sure that by now all of you have heard of the "Paleo Diet," that claims that the path to better health comes from eating like a cave man (or woman, as the case may be) -- consuming only foods that would have been eaten by our distant ancestors living on the African savanna.  The "Paleo Diet," therefore, includes grass-fed meat (cow is okay if you can't find gazelle), eggs, fish, root vegetables, fruits, nuts, and mushrooms.  Not included are dairy products (being that domestication of cattle and goats was post-cave-man), potatoes, salt, sugar, and refined oils.

But the "Paleo Diet" will sound like quantum physics, technical-science-wise, as compared to the latest diet to take the world of poorly-educated woo-woos by storm:

I wish I were making this up.  I also wish, for different reasons, that it was what it sounded like -- that people who sign up find themselves, once a month, sprouting fur and fangs and running around naked and eating unsuspecting hikers.  That, at least, would be entertaining. 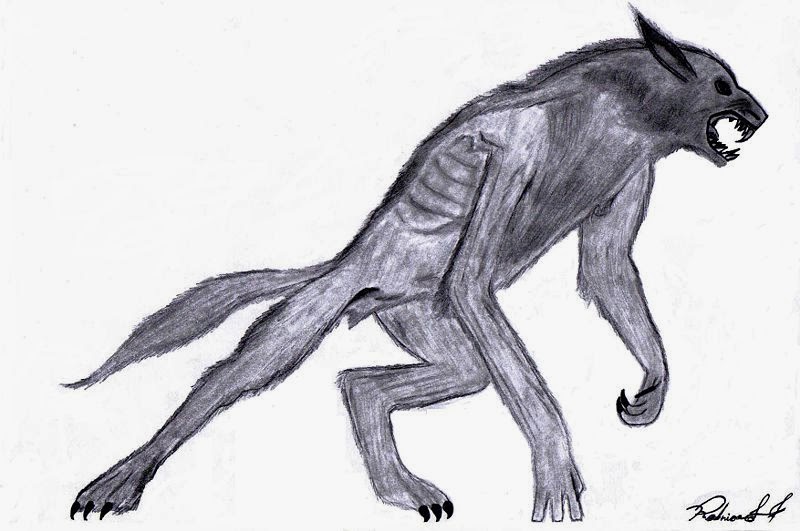 [image courtesy of Rodrigo Ferrarezi and the Wikimedia Commons]

But no such luck.  The Werewolf Diet, however, does resemble being an actual werewolf in that (1) what you get to eat is tied to the phases of the moon, (2) it more or less ruins your health, and (3) it completely fucks up any chance at a normal social life.

You have two choices, the "basic plan" or the "extended plan."  On the "basic plan," you fast for 24 hours, either on the full moon or the new moon.  You can, they say, "lose up to six pounds of water weight" by doing this, but why this is a good thing isn't clear.

The "extended plan," though, is more interesting.  With the "extended plan," you fast during the full moon, then eat a fairly normal diet during the waning part of the moon cycle (with the addition of drinking eight glasses of water a day to "flush out toxins").  On the new moon, you should fast again, only consuming dandelion tea or green tea (more toxin flushing).  During the waxing part of the moon cycle, you must be "disciplined" to fight your "food cravings," and avoid overeating.  "Thickeners," such as sugar and fats, should be avoided completely, and you can't eat anything after 6 PM because that's when the moon's light "becomes more visible."

Then you hit the full moon and it all starts over again.

Well, let me just say that this ranks right up there with "downloadable medicines" as one of the dumbest things I have ever read.  We have the whole "flushing toxins" bullshit -- as if your kidneys and liver aren't capable of dealing with endogenous toxic compounds, having evolved for millions of years to do just that.  We're told, as if it's some sort of revelation, that our "food cravings will increase" after we've been consuming nothing but green tea for 24 hours.  Then we are informed that the moon's gravitational pull has an effect on us, because we're 60% water -- implying that your bloodstream experiences high tide, or something.  But contrary to anything Newton would have had to say about the matter, the gravitational pull the moon exerts upon you somehow depends on the phase it's in, because, apparently, the amount of light reflecting from the moon's surface mysteriously alters its mass.

I mean, I'm not a dietician, but really.  And fortunately, there are dieticians who agree.  Keri Gans, a professional dietician and author of The Small Change Diet, said in an interview, "This diet makes me laugh. I don’t know if it’s the name or that people will actually believe it.  Either way, it is nothing but another fad diet encouraging restriction.  Restriction of food will of course lead to weight loss, but at what cost to the rest of your body?  If only celebrities, once and for all, would start touting a diet plan that makes sense and is based on science."

Interestingly enough, today is a new moon, meaning that today we're all supposed to be subsisting on dandelion tea.  To which I answer: the hell you say.  I'm off to get some bacon and eggs.  Detoxify that, buddy.
Posted by Gordon Bonnet at 2:20 AM