Many years ago, when I lived in Seattle, I was intermittently part of an amateur theater group.  I had several minor roles, but then finally, in what turned out to be the last play I'd be in, I got a lead role in Paul McCaw's musical comedy The Trumpets of Glory.

The idea of The Trumpets of Glory is that angels are constantly interfering with human affairs, all the way from major world events (wars) down to minutiae (sports).  Angels take sides, and manipulate things so that their side will win, thereby scoring points and moving up in the hierarchy.  I played the villain (which will come as no surprise to former students) -- an archangel named Zagore, who was undefeated in the past 3,000 years, until he meets up with a hapless newbie in a contest over the outcome of a high school football game.

Of course, being musical theater, the underdog wins, and Zagore goes down to ignominious defeat.  Still, it was a fun role, especially since I got to strut around on stage being extremely badass while wearing renaissance garb, including a cloak and a velvet hat with an enormous feather in it.

All of this comes up because of a recent poll by the Public Religion Research Institute, which indicates that half of the Americans polled actually believe that the universe works more or less like McCaw's play -- in spirit if not in exact detail.

"As Americans tune in to the Superbowl this year, fully half of fans — as many as 70 million Americans — believe there may be a twelfth man on the field influencing the outcome," PRRI CEO Robert Jones said.  "Significant numbers of American sports fans believe in invoking assistance from God on behalf of their favorite team, or believe the divine may be playing out its own purpose in the game."

Of the fifty-odd percent of Americans who believe that god cares about the outcome of the Superbowl,  26% reported that they have prayed that their team will win, 19% say that the winner is determined by god, and 25% suspect their team is cursed by the devil (this year, this last group probably includes 100% of the fans of the New Orleans Saints).

Furthermore, 62% of white evangelicals who responded to the poll said they thought that god favored athletes who were Christian themselves. 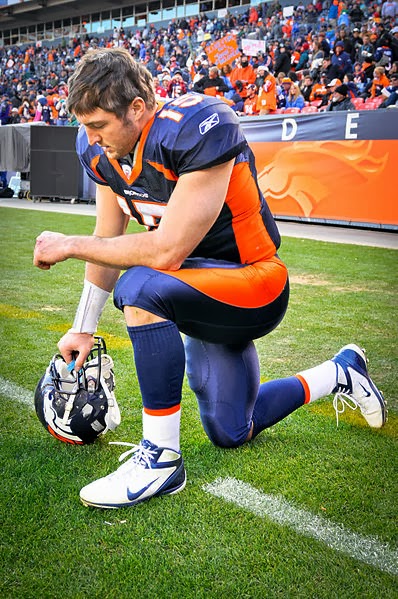 [photograph courtesy of Ed Clemente Photography and the Wikimedia Commons]

Now, I know that being an atheist, I'm to be expected to view all of this with a wry eye.  But even trying to be open-minded and ecumenical, and putting myself in the shoes of religiously-inclined sports fans, I find myself asking: how could this possibly work?  Does god employ an accountant, who keeps track of the number of prayers offered up on behalf of each team, and then he awards victory to the team that showed the greatest number of prayers?  (If so, the Washington Redskins fans may have some 'splainin' to do.)  Does the fervency of the prayers have an effect?  If so,  how do you measure the intensity of a prayer?  ("O Lord, the Seahawks fans offered up a total of 14,879 prayers, but their average prayer intensity only measured 3.47 tebows.  Do I let them win?")

What if everything comes out about even -- both teams have equal numbers of religious players, and the fans are all praying about the same amount?  Does god then just kind of sit back, crack open a beer, and say, "Heh.  Maybe I'll just wait and see what happens this time."

In all seriousness, I find the whole thing really puzzling.  As I've mentioned before, the concept of petitionary prayer has always struck me as the weirdest idea from conventional Christianity, as it seems to imply that you can change god's mind.  Even C. S. Lewis was uncomfortable with the idea, and in his essay "Does Prayer Work?" said that prayer doesn't exactly change god's mind, but it does influence things in some vague way: "He allows soils and weather and animals and the muscles, minds, and wills of men to cooperate in the execution of His will."

I dunno, the whole thing sounds kind of peculiar to me.  It boils down to my asking for god to do something, which either he already intended to do ("Yay, god is so awesome!") or else not ("Oh, well, god works in mysterious ways.").   Either way, it's hard to see how my praying (or not) had any influence whatsoever, and honestly, it seems to be more a way for me to feel good about having done something to help the situation without actually doing anything to help the situation.

But in the case of sports, it's even weirder, because then you not only have to believe that god exists, and considers the content of prayers, but cares who wins the Superbowl.  Which is just stretching credulity too far, even considering some of the other things religious people believe.

Of course, I guess it's to be expected that I'd have this response, and I'm writing this more in complete mystification than I am out of disapproval.  If any religious people who read this are so inclined, and want to explain to me how any of this could possibly work, I'd be willing to listen, even though I have to say up front that I doubt it'll convince me.  The suspension of disbelief I'd have to undergo in order to buy into any of this is just too great.

So I'm left where I started, which is that I really don't understand maybe half of the people who live in this country.  Which, I guess, is not all that shocking, considering the material I write about daily.  And if I'm entirely wrong, and there is a god up there, and he does factor in prayer in determining the outcome of events, allow me to say that had I known, I would have put in a good word for the Saints, because when they lose I kind of stop paying attention.
Posted by Gordon Bonnet at 2:09 AM