Hank the Bigfoot, and the minimum standard for evidence

One of the charges that gets leveled at skeptics is that we're not just questioning the evidence, we've already decided beforehand what we believe -- that is, that we're as blind to actual evidence as the people we're criticizing.  I've gotten that comment from people of a variety of different beliefs -- from the religious, from ghost hunters, from alien aficionados, from conspiracy theorists.  But always, it's the same:

"You're not really a skeptic.  You selectively ignore evidence that doesn't fit your beliefs.  If you'd just open your eyes, you'd see that you're so certain that you wouldn't accept hard evidence if it came up and bit you right on the ass."

To which I say: okay, I acknowledge that we all have our biases.  But at least people who subscribe to the scientific method have something going for them that most of the aforementioned so-and-sos don't; we have a decision-making protocol for deciding what actually counts as evidence.  Evidence has to meet the minimum standard of (1) supporting whatever the contention is, and (2) not supporting some other contention even better.

So while we might have our own biases, we're not as likely to fall for them as you might think.  When hoaxes and bad research happen -- as they do, sometimes -- the perpetrators almost always get caught out eventually.

Because if science is good at one thing, it's self-correction.  The majority of bad research never gets read, because the vetting process (replication and peer review) winnows out most of it before it gets very far along.  It's only the odd exception that slips through, and even those usually get caught in short order once published (forcing the public embarrassment of a retraction, such as the mess surrounding the Andrew Wakefield paper that alleged a connection between vaccination and autism).

Now, contrast that to what happens in other areas of study.  Just in the last two days, for example, we have three news stories, which I will present in increasing order of craziness, in the field of cryptozoology.  And nowhere that I've seen has anyone, even the more-or-less reputable cryptozoologists who would like to see the subject become a legitimate area of study, yell at these people, "Will you please stop making shit up?  Because you're embarrassing yourselves and everyone else in the field."

And apparently they've never even heard of the word "retraction."

Let's start with our friend Rick Dyer, who has appeared in Skeptophilia several times before for his outlandish claims of having seen Bigfoot, photographed Bigfoot, videotaped Bigfoot, found footprints of Bigfoot, found hair from Bigfoot, and slow-danced with Bigfoot.  Okay, I made the last one up, but that's not so far, plausibility-wise, from what he's now claiming:

That he has shot a Bigfoot, and is soon going to be touring the country with the body. 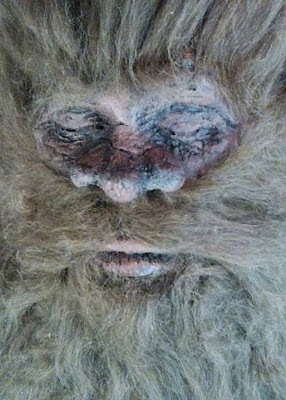 My first thought, upon seeing this, was "Dear god, no!  He killed Glóin the Dwarf!" 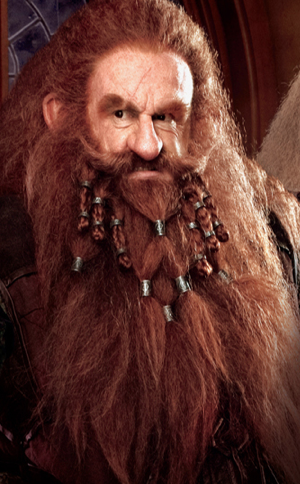 But no, Dyer is saying that this time, really and truly cross his heart and hope to die, he has a real Bigfoot.  Which he will show us, really soon.  Promise.

Which at least isn't as silly as the latest entry from the category of Yet Another Bigfoot Video that appeared over at Unexplained Mysteries a couple of days ago.  You can see the whole video here, which shows what appears to be either some poorly-executed CGI or else a video clip of a guy in a costume filmed using the "AutoBlur" function.  Here's a still:

Isn't it funny how, in these days of digital imaging, when an average cellphone can take better photographs than a $300 camera could twenty years ago, we still can't get a clear shot of these freakin' things?

But even that isn't as ridiculous as the claim by Kirk Sigurdson over at Cryptomundo that the reason we can't get close to Bigfoots is because they use infrasound like a "sound cannon" to make researchers sick:


(S)asquatch researchers have been grumbling about side-effects associated with ultra low frequency “blasting” for well over a decade… and for good reason: infrasound exposure can be quite uncomfortable, particularly when it is purposefully directed at a human target.

It can also be deadly. Perhaps this is why the subject of squatch-generated infrasound is an up-and-coming topic of great interest in bigfoot circles these days, along with the fact that cutting-edge human technology is catching up with the natural abilities of whales, dolphins, elephants, rhinos… and, yes, bigfoots...

When a bigfooter is exposed to infrasound—even though he (or she) cannot audibly hear the sound—its effects can certainly be felt.

Panic, anxiety, nausea, irregular heart rate, elevated heart rate, and the activation of “flight response” in the reptilian complex of the human target’s brain are only a few examples of observed side-effects.

So there you have it.  The Bigfoots are scaring us away with their infrasound blasting.  Maybe that's also what makes the photographs and video footage so blurry.

In any case.  I try to be patient with all of this stuff, I really do, and I make every effort to keep an open mind.  But every time I see one of these completely spurious claims trumpeted as real (and nearly every post in the "comments" section in full support, with any doubters getting shot down instantaneously as credulous fools who are unwilling to think outside science's "box"), I just throw my hands in the air in disgust.  I mean, really, people.  If you want to convince folks -- and by that I mean the ones who aren't already convinced, i.e. the people who would like to have a little in the way of hard evidence before they ink themselves into the "believers" column -- then do a bit of self-policing.  Establish some standard of veracity.  I know there are a few places that do a pretty good job in this regard -- the Society for Psychical Research and Centre for Fortean Zoology being two good examples.  But for cryin' in the sink, those are two sites amongst thousands.

So until you folks figure out a way to rein in the hoaxers and wackos, don't come complaining that the skeptics are viewing y'all with a wry eye.  Because we actually have an established protocol for what constitutes evidential support.  It's you people who refuse to use it.
Posted by Gordon Bonnet at 1:28 AM