Yesterday I came across the world's dumbest conspiracy theory.

Each time, I thought we'd reached some kind of Conspiracy Theory Nirvana, that there was no way anyone could come up with something more completely ridiculous.

Yesterday, I ran across a conspiracy theory that is so perfect in its absurdity that it almost reads like some kind of bizarre work of art.  You ready?

Dinosaurs never existed.  The whole thing is an elaborate hoax designed to give us the impression that organisms have evolved.  All the fossils ever "found" were either manufactured from plaster ("Is it possible," the author writes, "that dinosaur skeleton replica are secretly assembled or manufactured in private buildings out of public view, with bones artificially constructed or used from a number of different modern-day animals?  Why bother having any authentic original fossils at all if alleged replicas can please the public?") or are assembled from the bones of contemporary animals. 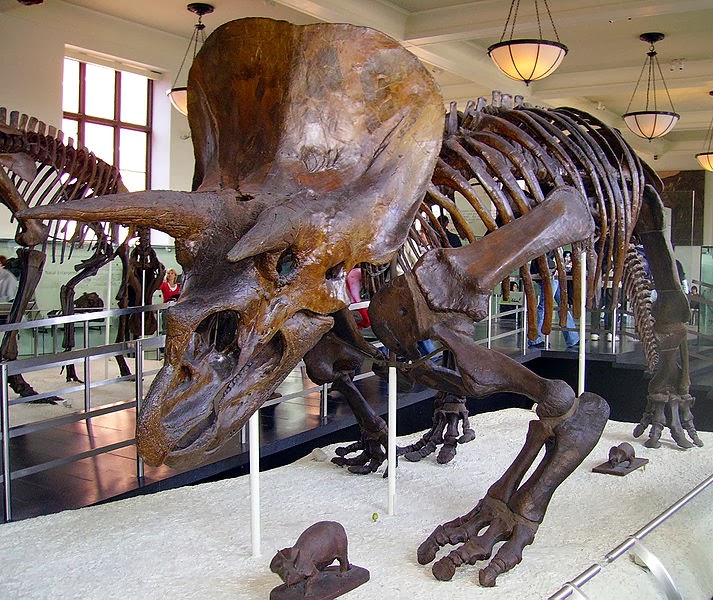 Along the way, we learn that (1) radiometric dating is a method fabricated to give the dinosaur claim credibility, (2) fossilization is impossible, (3) the biblical creation story is true and the Earth is about 6,000 years old, and (4) paleontologists are big fat liars.  All of the evidence, in the form of fossil beds such as the ones at Dinosaur National Monument and the extensive fossil-rich strata in North and South Dakota, were planted there.  "Finds of huge quantities of fossils in one area, or by one or few people, goes against the laws of natural probability," we are told, despite the fact that once something occurs, the probability of its having occurred is 100%.

But so far, there's nothing much to set this apart from your usual run of creationist nonsense.  The pièce de resistance, though, is who they think is behind all of this falsehood, duplicity, and deception.  Who is it that has invented all of these fake "theories" about radioactive decay, geostratigraphy, and evolutionary descent?  Who planted all of these artificial fossils all around the world?

The Jews, of course.

So last night, over dinner, I had a chat with my wife, who is Jewish.  I asked her why she spent her spare time creating a fake Jewrassic Park in Utah.  She already has her art -- isn't one hobby enough?

"I'm just that evil," she responded.

I asked her if she had any kind of Official Statement to make, now that her wicked plot has been uncovered.

She thought for a moment, and then said, "I'd have gotten away with it, if it hadn't been for you crazy kids and your dumb dog."

She did ask one question, though, after making her Official Statement:  "Don't these people realize that the creation story is in the Jewish bible, too?  That, in fact, the first five books of the Christian bible are exactly the same, word for word, as the Torah?"

I said I didn't know, but if I had to hazard a guess, that logic had very little to do with any of this.

So that's it, folks: the Jews have gone all over the world, including Antarctica, planting fake fossils so as to fool the true believers.  Then they invented radiometric dating, evolutionary biology, and the entire science of geology.  There it is -- the single dumbest conspiracy theory ever.  If you run across a dumber one, please don't tell me, because then I'll have to post about it, and I feel like my IQ dropped at least 20 points just in doing the research about this one.
Posted by Gordon Bonnet at 3:09 AM