Some of my regular readers may remember that a few months ago, I posted about a trio of young and extremely Christian ladies who were invading Britain to rid the country of demons that had been brought there because so many British children read Harry Potter.

One of them is named Brynne Larson.  It will come as no surprise that Ms. Larson is from an fundamentalist household; hard to imagine your believing anything that ridiculous if you didn't learn it as a very young child.  Be that as it may, Ms. Larson's father is Bob Larson, an evangelical preacher, talk radio host, and general wingnut.  Larson has been doing his dog-and-pony show for a while; I remember listening to him back in the 80s when I lived in Seattle.  I'd turn the show on when I got stuck in traffic, which was often, because I figured that the best thing to keep you from experiencing road rage is to listen to a radio show that distracts you by making you even madder at something else.

Well, Larson is still around, and just this week announced that he's out there fighting the Evil One just as hard today as he was thirty years ago.  He has, he claims, performed over 20,000 exorcisms in his life.  Doesn't that seem like a lot, to you?  It would imply that a good many of the people we meet on a daily basis are possessed, which I kind of doubt.  I don't think I've seen anyone lately who was guided by a demon, with the exception of the woman who ran a stop sign and cut me off in a Syracuse mall parking lot last weekend during a snowstorm, and I don't think she was possessed by anything but the evil spirit Dumbassimus.

But Larson begs to differ.  The demons are out there, he says; "there'll never be a shortage."  There are so many, in fact, that Larson can't keep up with the requests.  He receives so many that now he has to do his exorcisms... 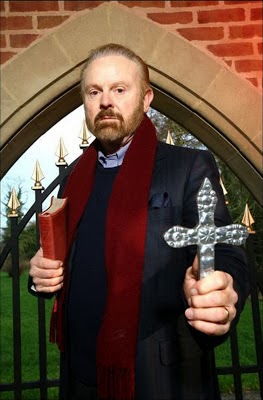 I don't know about you, but my first thought upon reading that was, "How could that work?"  Here you have a wicked, dangerous minion of Satan, who has latched on to some poor unfortunate soul in Hogfoot Junction, West Virginia.  And a guy shows up on Skype and says, "Get thee gone, evil spirit!" from 2,000 miles away via an internet connection, and the demon has no choice but to retreat in disarray?  If I was a demon, and Larson showed up babbling at me to Return to Hell From Whence I Came, the least I would do is to flip him off and then cause his computer to experience the Blue Screen of Death.

I mean, it can't be that hard.  My computer does that often enough without any demons being involved.

And it has to make you wonder what's next.  Will he start distributing general exorcisms through Twitter?


Get thee behind me Satan, in the name of Jesus Christ our Lord Amen #ChalkAnotherOneUpForMe #IGuessThatShowedYou

What if he doesn't finish his magical incantation before he runs into the 140-character limit?

My overall impression is that he's fighting a losing battle, trying to use the internet to fight Satan.  Just considering the volume of pornography alone, out there on the 'net, I think that so far it's Larson 0, Satan 1,489,352.

Larson, of course, doesn't see it that way.  When asked in an interview with ABC15 if his Skype-your-way-out-of-hell method was nothing more than a fire-and-brimstone circus act, he said, "It’s real.  There would be no reason to theatrically stage this for any reason.  Why would anybody do that?  I have no idea."

I'll pass over the fact that he used the word "reason" twice, and that his worldview isn't exactly one in which reason, in its literal sense, is the driver.  But really, Reverend Larson?  You can't think of any other incentives for doing what you're doing, other than the need to fight the Evil One?  How about money?  Notoriety?  Being interviewed by a major news outlet?

But other than those, nothing, right?

So that's the latest from the world of religious wingnuttery.  I live in hope that most Christians recognize whackjobs like Bob Larson for what they are, but the sad fact is that there are enough people still listening to Larson that his show, Talk Back, is still being aired, and his ministry still gets followers.

And he still gets people, over Skype, who are eager for him to free them of demons -- for just a small donation to support the ministry, of course.