An article today in The Examiner has thrilling news for anyone who lives in upstate New York: we are apparently now at the epicenter of an outbreak of woo-wooness.

This is especially exciting for me, because I live in upstate New York, and heaven knows there's little enough else to be thankful for in this part of the country in January.  Tomorrow's high is supposed to be 4 degrees, and for those of you who think in metric, that's Fahrenheit, not Celsius.  If you convert it to Celsius, using the formula that we all learned in 7th grade and then promptly forgot, you get a fairly significant negative number.  And even if you were to measure it in Kelvin, a scale which tries to fool you into thinking that you are warmer than you really are by setting "zero" at "so cold that all molecular motion ceases," I'm guessing that you would not be tricked for a moment.  Regardless of what scale you put it into, 4 F is in that range that is classified by scientists as "really fucking cold."

And I haven't even mentioned the wind chill factor.

So right about now, we upstaters are looking for any possible reason to be optimistic.  And it appears that we have one; according to an article entitled "Yes, New York, You're Seeing Things," this part of the world is currently in the middle of a "flap," which means that all sorts of weird things can be expected to happen.

The term "flap" was coined by author John Keel, whose biggest claim to fame is the truly terrible book The Mothman Prophecies.  I tried to read The Mothman Prophecies once, and got only about halfway through it before I gave up.  And it bears mention that I have a fair tolerance for goofy paranormal writing.  I grew up on books that had titles like Twenty True Tales of Terror, and I still proudly own a copy of Ivan T. Sanderson's Abominable Snowmen: Legend Come to Life.

But Mothman defeated me.  Maybe it was the rambling, incoherent prose; maybe it was the fact that very little of it turned out to have anything to do with the Point Pleasant Mothman.  But I just couldn't do it.

I also found out, when researching Keel, that he wrote several scripts for Lost in Space.  And given that this was one of the most completely abysmal shows ever to hit the airwaves, I suppose it all makes sense.

A "flap," according to Keel, is "any geographical region where a large number of strange sightings and experiences are clustered over a period of time, usually about 12-18 months."  The problem is, Keel said, that investigators in various areas of the paranormal -- UFOs, say, or ghosts, or Bigfoot, or psychic manifestations -- don't usually communicate much with one another.  So a UFO enthusiast might not be aware if there'd been an outbreak of ghosts nearby, for example.

But these flaps are real things, said Keel, and so does Keel's successor (Keel himself died in 2009) Andy Colvin.  Here's how Colvin describes a "flap:"


People who previously had no odd experiences at all will suddenly find themselves deluged...  Similarly, regions that are suddenly awash with UFO reports will also be awash with an increase in reports of hauntings, Bigfoot sightings, even mysterious fires and other odd events.  In correlating reports over a couple of decades from all over the country, Keel was eventually able to determine that these 'waves' of flaps occurred in a broad swath that moved pretty regularly through the same areas of the country every few years.  His clues to whether a true flap was going on include: Are parallel events happening at approximately the same time in different parts of the country? And, are a wide variety of phenomena being reported all at once in the 'target areas?'

And apparently, Colvin thinks that upstate New York is currently flapping like a flag in a hurricane:


(T)here has been a sharp increase in the number of odd nocturnal lights being observed up and down the Hudson Valley, from New York to Albany with some up to Rochester.  These numbers can be found at this national data base which simply collects reports, records them and chooses some of the more complicated ones for further study.  It has always been true that most UFO reports are basically reports of strange lights in the sky.  What's important about this information is the relative increase...  (J)ust in the last six months, there have a sharp increase in the number of people reporting encounters with Cryptids, in this instance, possible Bigfoot type creatures, in the Hudson Valley and Catskills proper.  While many of these reports could also be bear sightings, a number of them are quite interesting and include reports of associated sound and electromagnetic disturbance (cameras and phones suddenly not working, odd electrical outages), the classic terrible stench (which is not associated with bear) and some intriguing thermal imaging.  Many of these reports are collected and posted regularly at this Facebook page.

So there you are, then.  My general attitude is: bring it on.  There's nothing like actual evidence to convince me, and if we're in the middle of a flap, it should mean that someone will be able to get some hard data.  Unless, of course, it's all a bunch of nonsense, which could well be.

There's just one downside to all of this, though, and we're warned about it later in the article:


Finally, and most disturbingly, Keel noted that true flaps are often signaled by the untimely, sudden deaths of individuals who are known to have investigated these phenomena. The deaths often occur at the peak of the flap or right as the flap is beginning a sharp increase to reach its climax. In a number of his writings, Keel lists the individual researchers who passed on during clustered reports of the very things that most interested them. A few of these unusual deaths are recounted at this site, even though it's not as reliable as Keel.

The phrase "not as reliable as Keel" strikes me as strangely hilarious, given that most people tend to think that the stuff he wrote about ranked right up there with Lost in Space in terms of technical accuracy.  So I'm not really worried, despite my (1) having a deep and abiding interest in paranormal phenomena, while (2) not really believing much of any of it, and (3) living more or less in the center of the "flap."  Oh, yeah, and (4) being basically a big coward.  I am not the person you'd want by your side if there were some sort of real paranormal occurrence, because I'd faint and then you'd have to drag me to safety, unless you decided to save yourself and leave me to be eaten by zombies. 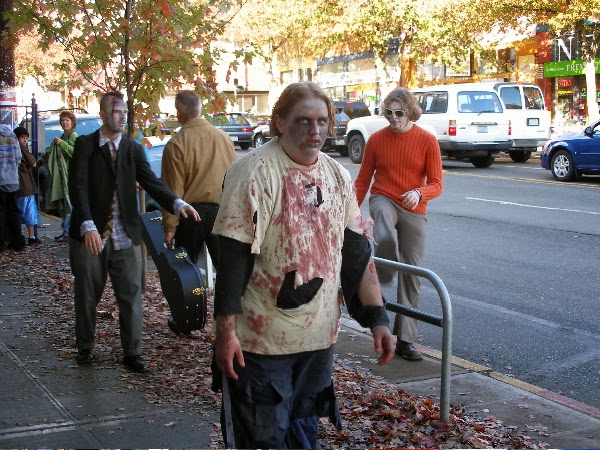 [image courtesy of the Wikimedia Commons]
Logic and reason, not to mention friendship, only get you so far.

But anyway.  I'm happy to hear that for once, I appear to be where the action is.  I'm sick and tired of the Pacific Northwest and the Himalayas getting all of the Bigfoot sightings, and the UFO visitations favoring the American Southwest.  Maybe I'll finally have a shot at seeing something weird happen.  And when I do, trust me -- you'll be the first to know.

As soon as I regain consciousness.
Posted by Gordon Bonnet at 2:06 AM