Before I get to today's post, I want to point out something that you probably have already noticed -- a new feature in the upper right-hand corner of Skeptophilia labeled "Donate."  If you're a regular reader -- or even if you're not, and just want to support the effort and time it takes to bring posts to you six days a week that leave you thinking or laughing or both -- then consider making a donation!  You can contribute securely through PayPal, and your (much appreciated) donation will help assure that we will be able to continue to provide you with skeptical content for a long time to come.

And now, back to our regularly scheduled programming.

Rush Limbaugh is kind of predictable.  All you have to do is watch the weather map. If we have any sort of anomalous weather, you can guarantee that a day or two later he will be drawing on his skills as a climatologist to inform his loyal listeners that whatever it is had nothing to do with global warming.  It's just like clockwork, sort of like intestinal gas after a meal at Taco Bell.

This time, though, he's gone a step farther.  The piece of the polar vortex that has been spinning its way across the northern United States, causing widespread damage, thousands of school closings, and wind chills in some places lower than -50 Fahrenheit, is not real, Limbaugh says.  It's all a hoax.  And guess who is perpetrating this hoax?  You'll never guess.

Here's what he had to say in Monday's Rush Limbaugh Show:


Do you know what the polar vortex is? Have you ever heard of it? Well, they just created it for this week...  Now, in their attempt, the left, the media, everybody, to come up with a way to make this sound like it's something new and completely unprecedented, they've come up with this phrase called the "polar vortex."  If you've been watching television, they've created a graphic, all the networks have, and it basically consists of a view of the planet if you are right above the North Pole. They put this big purple blob, or blue blob, or red blob, depending on the network you're looking at, over the entire North Pole, and they call that the polar vortex. It actually sounds like a crappy science fiction movie to me, but anyway, that's what they're calling it.


We are having a record-breaking cold snap in many parts of the country.  And right on schedule the media have to come up with a way to make it sound like it’s completely unprecedented.  Because they’ve got to find a way to attach this to the global warming agenda, and they have.  It’s called the ‘polar vortex.’  The dreaded polar vortex.”

Liberals are in the middle of a hoax, they’re perpetrating a hoax, but they’re relying on their total dominance of the media to lie to you each and every day about climate change and global warming.  So they created the polar vortex, and the polar vortex, something’s happened, and that cold air which normally stays is in the North Pole, something’s happening, something deeply mysterious and perhaps tragic is happening.

Whatever it is that keeps the polar vortex vortexed in the Arctic Circle is vanishing, and that cold air is coming to us. Normally it stays up there. But now it's down here. How did it get here? That's the deepening mystery. That is the crisis. That is what is man-made. Man is destroying the invisible boundaries that keeps that air up there. How did it get cold in previous winters? Well, it got cold in previous winters, but, see, as far as most people are concerned, this is as cold as it's ever been in their lives. Well, but, Snerdley, I'm just telling you their technique. Forget truth. The truth and the Democrat Party, the truth and the American left never intersect.

My point is you have a lot of people who are believing that this is as cold as it’s ever been.  You might think that flies in the face of global warming.  Ah, ah, ah, ah.  Global warming’s not climate change, and we, folks, are causing all of this, you must understand.  The hoax continues.

So, let's analyze this, shall we?

First of all, let's look at his first contention, which is that the "polar vortex" was just invented by liberals last week to scare everyone, for reasons unknown.  Strange, then, that the term was first used 150 years ago to describe the Arctic air circulation (Littell's Living Age, #495, 12 November 1853, p. 490), and has been standard terminology in climate science ever since.  All you have to be able to do is to use Wikipedia -- something that apparently is outside of Mr. Limbaugh's rather limited skill set -- to find out that the reduced ice coverage in the Arctic Ocean, coupled with weakening of the polar air circulation, has been known for years to cause "meanders" in the jet stream that sometimes cause whirling blobs of cold air to break loose from the main polar vortex -- just like what happened this week. 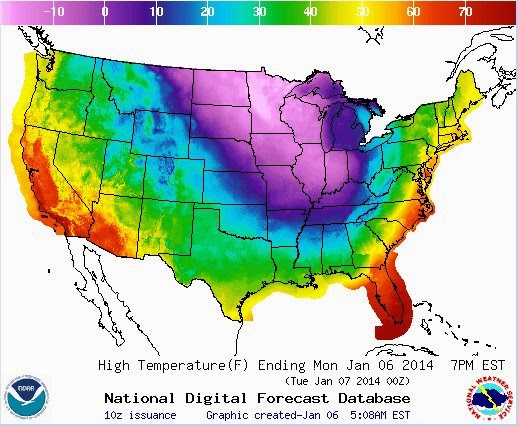 But let's consider other sources.  They had a lot to say about the phenomenon this week over at ClimateCentral.org, where in an article on this week's weather we read:


The forecast high temperature in Fairbanks, Alaska, on Monday was in the 20s Fahrenheit — warmer than many locations in Georgia and Alabama. That fits in with the so-called “Arctic Paradox” or “Warm Arctic, Cold Continents” pattern that researchers first identified several years ago. Such patterns bring comparatively mild conditions to the Arctic while places far to the south are thrown into a deep freeze...  The warmth in the Arctic made headlines in early December when the temperature hit 39°F in Prudhoe Bay, north of the Arctic Circle. That was the highest December temperature on record there since at least 1968, according to the National Weather Service.

Even more interesting was what Rick Grow, writing for The Washington Post, had to say:

What is unusual about this week's event is that instead of just spawning a minor meander, nearly the entire polar vortex came unhinged and started drifting south -- which you can see on the following map, showing that while Chicago was in the deep freeze, northern Labrador was experiencing far warmer than normal conditions: 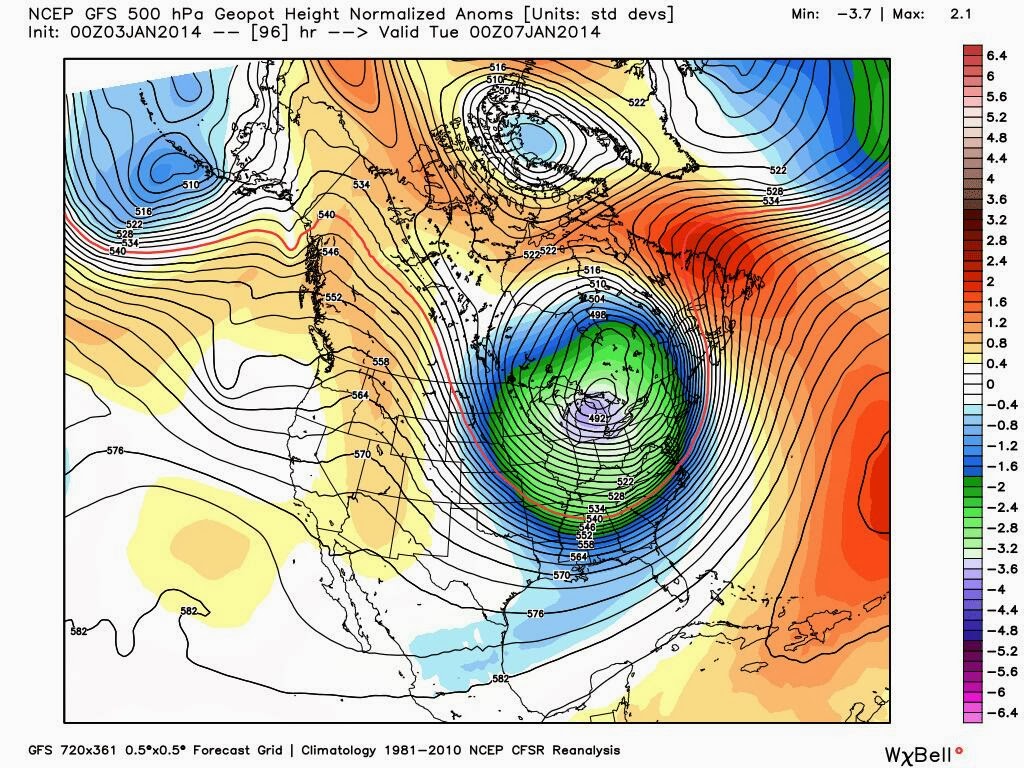 What I find interesting about this is that when we set record high temperatures -- like we did two weeks ago in the Northeast, when in my usually chilly home town we shattered all previous records for that day with a balmy 67 Fahrenheit -- the climate change deniers point out that as everyone knows, there's a difference between weather and climate.  That was just a single day's high, nothing to be concerned about.  But when we have cold weather, you have bloviating windbags like Mr. Limbaugh ranting about how the icy conditions show that global warming is a hoax.

So who is it, exactly, that seems to have no intersection between their agenda and the truth?

As I've said before: to reject the basic tenets of climate change, you have to ignore mountains of hard data from the last fifty years, coupled with the predictions of climate models developed by some of the best climatologists in the world.  Because they have no particular difficulty coming to consensus; well over 90% of climate scientists not only believe that the Earth is warming, they believe that the warm-up is due to human activity, especially the burning of fossil fuels.

The problem is, more people listen to fools like Rush Limbaugh than listen to the scientists, which is exactly what people like him want.  Dumb folks down.  Science is hard, and often confusing; here, let me tell you what to think.  The people who are trying to get you to change your ways are just liars and hoaxers with a secret agenda to destroy the U. S. of A.  It's okay, you can still drive your Hummer around with a clear conscience.

And outside, the wind is still howling, and the weather is becoming more and more unpredictable.  Today, as I write this, it's -4 F.   By Saturday, it's predicted to be 48 F and raining.  In upstate New York, in mid-January.

Liberal agenda, my ass.
Posted by Gordon Bonnet at 2:44 AM