So the Ham-on-Nye debate is history, and we science-minded types are breathing a sigh of relief that it went as well as it did.  As I pointed out six months ago, Bill Nye had every reason to refuse to debate Ken Ham.  In fact, it's misleading to call it a debate in the first place, as Ken Ham doesn't accept hard evidence as the sine qua non of understanding.  He said as much, during the question-and-answer period, when he was asked "What would it take to change your mind?" and he answered in what may have been the most telling quote of the entire evening:

I can't ultimately prove that to you, all I can do is to say is to say to someone, "Look, if the bible really is what it claims to be, if it really is the word of god (and that's what it claims), then check it out, and the bible says that if you come to god believing that he is, he will reveal himself to you and you will know.

Contrast that to what Bill Nye said, to the same question:

Bring on any of those things and you would change my mind immediately.

So it really wasn't a debate.  Further, it has the possible downside of giving the impression to anyone on the fence that there is controversy over the issue; as I've said many times before, there is far more controversy, in scientific circles, about the ultimate explanation for gravity, and the means by which it operates, than there is over evolution.

So the Great Debate was really preaching to the choir, as it would inevitably have to be.  Still, most folks I've seen seem to think that Ken Ham had his ass handed to him -- even a poll over at Christian Today gave Nye the win, with the final tally being a decisive 92%-8%.

This hasn't stopped the creationists from singing Ham's praises, of course, which is pretty much what I expected.  There was a post over at Buzzfeed that's been making the rounds, wherein writer Matt Stopera asked 22 creationists what message they had for the evolutionists.  And despite my stance that arguing with these folks is generally fruitless, I felt obliged to respond largely because of the level of derp evident in so many of these statements.

So here they are -- the 22 statements from creationists, and my 22 responses.  Just so I don't have to write "sic" a hundred times, you'll just have to trust that I'm copying them with the spelling and grammar as written (or click on the Buzzfeed link and verify it for yourself).

1.  Bill Nye, are you influencing the minds of children in a positive way?

My answer: Damn skippy he is.  I'll take a rational, evidence-based understanding of the world over Bronze-Age mythology and magical thinking any day of the week.

2.  Are you scared of a Divine Creator?

My answer:  Are you scared of Frost Giants?  Why would I be scared of something I don't believe in?

3.  Is it completely illogical that the Earth was created mature?  i.e. trees created with rings...  Adam created as an adult...

My answer:  Yes, it is.  If you're accepting that, then how do you know you weren't created five minutes ago by Zeus, with your memories as-is?  If you don't buy that we understand the world through logic, reason, and the information from our senses, and accept that the world acts in a regular, understandable way, you have to throw out all of science, not just evolution.  Interesting, isn't it, that questions like yours -- that undermine our ability to know the universe -- could equally well be applied to chemistry, but no one ever frames them that way?

4.  Does not the Second Law of Thermodynamics disprove evolution?

My answer:  Fer cryin' in the sink, take a fucking physics class.  The Second Law of Thermodynamics says that in a closed system, entropy (disorder) always increases.  The Earth is not a closed system, therefore there can be local and temporary decreases in entropy.  There is no conflict between thermodynamics and evolution.

5.  How do you explain a sunset if their is no God?

6.  If the Big Bang theory is taught as science along with evolution, why do the laws of thermodynamics debunk said theories?

My answer:  See #4, especially the part about taking a fucking physics class.

My answer:  What about it?

8.  Where do you derive objective meaning in life?

My answer:  The meaning in my life comes from my connections to my family, friends, vocation, pets, and community.  I don't need a magical sky guy to give my life meaning; I create meaning for myself.

9.  If God did not create everything, how did the first single-celled organism originate?  By chance?

My answer:  Pretty much, but the chance was really high.  Organic compounds are common in the universe, can readily be created by abiotic processes, and will self-assemble into cells.  Life is probably abundant in the universe.  Once again: no need for the hand of a magical sky guy.

My answer:  How nice it must be for you to have an understanding of the universe that doesn't require you to do any hard work.

11.  Why do evolutionists/secularists/huminists/non-God believing people reject the idea of their being a creator God but embrace the concept of intelligent design from aliens or other extra-terrestrial species?

My answer:  Whatever drugs you have been ingesting, can I have some?

12.  There is no inbetween... the ONLY one found has been Lucy and there are only a few pieces of the hundreds necessary for "official proof..."

My answer:  You seriously think that the only hominid fossil is Lucy?  And that scientists have a numerical threshold for "official proof?"  "Nope, sorry.  We've only got 99 pieces of data supporting the existence of velociraptors.  If only we had one more... but for now, we'll have to classify them as "imaginary."

My answer:  Of course it does.

14.  If Evolution is a theory (like creationism and the Bible), then why is it taught as fact?

My answer:  Creationism (and the bible) are not theories.  Theories are testable models of how the world works.  Saying "god did it" is not a testable statement.  "Theory" doesn't mean "it could just as easily be false as true."

15.  Because science is by definition a theory -- not testable, observable, nor repeatable -- why do you object to creationism and intelligent design being taught in school?

My answer:  See #14.  And I object to it for the same reason that you would object if your child's chemistry teacher taught him that you can convert base metals into gold via alchemy; because it's wrong.

16.  What evidence has science discovered that evidences an increase of genetic information seen in any genetic mutation or evolutionary process?

My answer:  Three examples out of hundreds known: Chromosome duplication and subsequent divergence.  Segment and polarity genes in arthropods.  Allopolyploidy.  All of which are excellent supports for evolution and speciation, so thanks ever so much for asking.  (For a wonderful take-apart of the so-called "information problem," go here.)

17.  What purpose do you think you are here for, if not for Salvation?

My answer:  If you mean Purpose, capital "P," then I think there isn't one, an idea that seems to terrify religious people and doesn't bother me at all.  I don't really feel the need for there to be a Cosmic Reason for Everything.  As far as my more immediate purpose; to teach, learn, love, enjoy, grow, experience.  And that's enough to satisfy me.

18.  Why have we found only 1 "Lucy" when we have found more than 1 of everything else?

My answer:  That may be one of the dumbest questions I've ever read.  How do you manage to remember to walk without dragging your knuckles on the ground?

My answer:  Science doesn't require faith; science and faith are opposites.  (Unless you're talking about my faith that science actually is a valid way of knowing the universe; if that's what you mean, then we can talk, but I don't think that's what you're asking.)  The Big Bang is a model that explains the evidence we see; faith is the belief in things not seen.  It takes no more faith to "believe in" the Big Bang (although I hate using the word "belief" referent to a scientific model) than it takes faith to "believe in" genes, or atoms, or stars, or the core of the Earth.

20.  How can you look at the world and not believe Someone Created/thought of it?  It's amazing!!!

My answer:  Ah, yes, the Proof from Incredulity.  "I can't imagine this, so it must be god."  Well, yeah, okay, the world and all of the life in it is pretty amazing.  That I feel that way is why I became a biologist.  But it's also pretty crazily thrown together, too, which is why "intelligent design" doesn't work.  Take the human male reproductive apparatus, for example, which has to be one of the most oddly "designed" organ systems in the animal kingdom.  We have two extremely sensitive structures that have to be positioned outside of the abdominal cavity in order to work, right at a position where they are easily kneed, kicked, and head-butted by small children and large dogs; the sperm-delivery device is fused to the urinary system, thus (as a friend of mine put it) being the equivalent of running a sewer pipe directly through a playground; and the urethra passes right through the prostate gland, which is unusually likely to become cancerous and squeeze the whole thing shut.  If a deity planned all of that, he has a really twisted sense of humor.

21.  Relating to the big bang theory... where did the exploding star come from?

My answer:  If you can't be bothered to take a fucking physics class, will you people please at least read the Wikipedia article on a topic before you ask moronic questions?

22.  If we come from monkeys, why are there still monkeys?

My answer:  If my ancestors came from France, why are there still French people?


So, anyway, there you have it; my response to the Nye/Ham debate, and the 22 questions from creationists.  My head now hurts from all of the faceplants I did reading those, and I suspect yours might, too.  So, as my gift to you for making it all the way to the end, here's a Klingon facepalm, to show you that Worf is on our side. 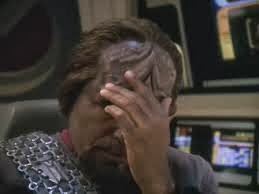