Writing this blog sometimes puts me into very odd conversations.

Witness what happened yesterday, an exchange between myself and a friend that started out with the odd question, "Do you know what Justin Bieber is?"

I responded, "Of course I know who Justin Bieber is."

"Um," I said, showing my usual articulateness when confronted with peculiar questions.  "Well, he's a pop singer whose songs make me want to remove my ears with a vegetable peeler.  He also, by his recent behavior, appears to be a spoiled rotten brat."

At that point, the light dawned.  Like I said, sometimes I'm a magnet for bizarre claims, but that doesn't mean that I'm quick on the uptake about it.  "Lemme guess," I said.  "Someone found a photograph of him where he appears to have antennae, or something."

"Better than that.  Video footage, where his eyes seem to turn into reptile eyes."

"Marvy," I responded.  "Bieber's one of the reptilian overlords.  I shoulda known."

So my friend directed me to an article on Huffington Post amusingly titled, "Fox News Accidentally Reveals That Justin Bieber is a Reptile."

Apparently what happened is that an alert Fox News viewer, whose YouTube handle is RyGuyVA, was watching the footage showing the Biebs in court after his unfortunate run-in with marijuana, prescription medications, a Lamborghini, and a Miami Beach police officer (in that order).  And RyGuyVA notice that in one frame, Bieber's eyes appear to change.

"Boom," RyGuyVA says.  "I always though that stuff was BS. But come on." 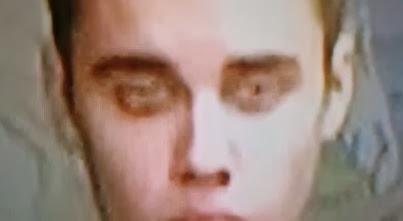 Seriously, look into those eyes.  Don't they seem bent on world domination?

Of course, the easier explanation is that it's a "video compression artifact," a loss of video data as it is reduced to fit available storage space or transmission bandwidth.  And as we've seen before, you can turn grainy images into anything.  Take a look at the "unfocused gaze illusion" -- in which your brain takes a blurry image of a human face and makes a decision (wrong, as it turns out) about which way the eyes are pointing.  Even more startling is the effect of focusing a blurred image of Charles Allen Gilbert's painting "All is Vanity" -- pass your cursor over the fuzzy image and watch what it turns into!

But of course, there are people who would just love to belieb that Justin is an all-powerful alien.  And I have to admit that "reptilian overlord" has more gravitas than "drug-addled twit."  Given that there are conspiracy theorists like the wonderfully bizarre David Icke who think that bunches of famous people are reptilian aliens, including various pharaohs, kings and queens (including Queen Elizabeth II of England), 43 of the US Presidents (no word I could find on which ones were left out), the entirety of the Rockefeller and Rothschild families, and the late comedian Bob Hope, it's no real surprise that Justin Bieber should be on the list, too.  I guess they need someone to provide them with music, out there in Reptilian Command Central.

At this point, though, don't you think he's kind of overstayed his welcome here on Earth?  I mean, besides the annoying songs, he's now breaking the law and just generally making a nuisance of himself, to the point that there's now a "We The People" petition to deport him back to his native Canada.  But if he's really an alien, then why should we burden Canada with him?  Put him on a rocket and send him out into space, is what I suggest.  Let his reptilian buddies pick him up and bring him back to Zeta Reticuli, or wherever the hell they're supposed to be from.

That'd turn me into a belieber.
Posted by Gordon Bonnet at 2:12 AM