Every once in a while, I'll run into a story that just gives me the shudders, despite my generally rationalistic approach.  All this does, of course, is to highlight a truism about the human condition; when it comes to a fight between logic and emotion, emotion usually wins.  We like to flatter ourselves, and think that our highly-developed prefrontal cortices make us smarter than our non-human cousins, but when it comes to a real throw-down match between the parts of the brain, I'm putting my money on the limbic system every time -- the part of the brain that, along with the hypothalamus, governs the "four F's" of behavior: feeding, fighting, flight, and... mating.

A story this week out of Brazil highlights the third "F" -- which stands for the flight response.  It could also stand for "fear," because that's what usually motivates an animal running away.  The story, which comes out of the town of São Gonçalo de Campos, near Feira de Santana, in the state of Bahia, is about a rather terrifying cryptid that has been sighted more than once in local neighborhoods.

Even the government officials are taking it seriously.  Apparently, for the last two weeks there's been a curfew in the town; no one is to be outside after 9 PM.  It started when a man identified only as "Pingo" described seeing a five-foot-tall black monster, which ran at him; Pingo turned and fled, escaping (he said) only by the narrowest of margins.  At first, the other villagers made fun of him -- until others had similar encounters.  Locals are calling it a "werewolf."

All of this would have been nothing more than another tale of "I saw something real, really I did" if it hadn't been for the footage captured on a home security camera.  Watch it for yourself: 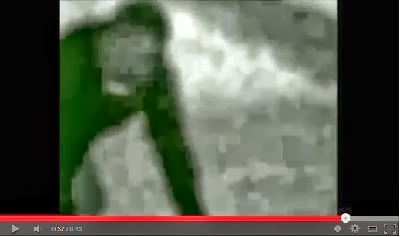 Okay, yes, I know.  There are no such things as werewolves.  There's no reason why this couldn't have been faked.  It probably is a guy in dark clothes jumping around in front of the homeowner's security camera, in order to keep the whole scare going.  Who knows?  Maybe it's even "Pingo," who dreamed the story up to have his fifteen minutes (or in this case, more like two weeks) of fame.

But I have to admit that watching this video gave me some very irrational shudders right up the spine.  There's something about the way the creature moved that just doesn't look... human.  I'm probably being suggestible, I realize that; our fight-or-flight responses have been programmed through millions of years of evolution to shriek at us, whenever we see a shadowy shape in the dark, "DEAR GOD IT'S A PREDATOR RUN FOR YOUR LIFE OR YOU WILL BE MESSILY DEVOURED."  The chances of it being anything other than a hoaxing human are very small.

Even so, if I lived in São Gonçalo de Campos, I would definitely abide by the curfew.  I probably would also deadbolt my doors shut at night.  Maybe it is only Pingo playing a prank; that's what my prefrontal cortex is telling me.  But if I lived anywhere near where this thing had been seen, my limbic system would outshout my prefrontal cortex without even breaking a sweat.
Posted by Gordon Bonnet at 2:10 AM