I hate to be the bearer of bad tidings, but we're all gonna die.

I mean, what is this?  This 452nd time this has happened, or something?  Between Mayan apocalypses and Christian End Times predictions and the planet Nibiru and plagues and pandemics and the Harmonic Convergence and the Yellowstone Supervolcano (which is still overdue for an eruption!), it's kind of surprise we're all still here.

This time, the world is going to end because we're going to be destroyed by a rogue planet that is hurtling in toward the inner Solar System at a speed of 200 kilometers per second.  So says a report on Turner Radio Network, which claims that "Dr. Kaplan, a Professor in the Astronomy Department at the University of Texas at Austin" has discovered a large object that is heading toward us -- and that even if it doesn't hit us directly, "the gravity will affect the Earth in terrible ways long before it gets here." 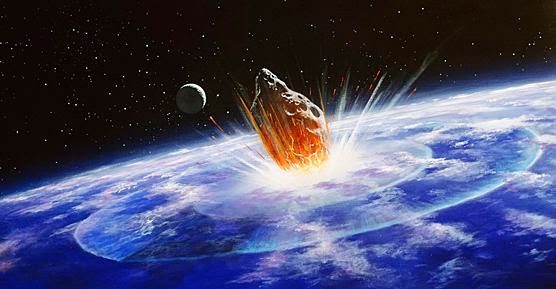 Dr. Kaplan made a video (linked on the website) wherein he projected the planet's arrival time as August 2014, which is the only thing I find that is cheerful about this prediction.  It gives me the summer to recover from the progressive hypothermia I've experienced this winter, so at least I'll finally be comfortably warm by the time I get vaporized.  And it also means that whatever else happens, I won't have to endure another upstate New York winter, because interaction with the planet will cause "shifting of the tectonic plates on a massive scale."  I can only hope that our tectonic plate will shift toward the equator.  If that's an outcome of a planetary collision, then all I can say is, bring it on, because I have had it with the snow.

Of course, the other predictions are more dire.  "(I)f Kaplan's scenario is true, the problems Earth will experience would begin with weather anomalies and tidal anomalies, will increase to earthquakes then volcanic eruptions as Earth's magma is pulled by the gravity of the approaching planet," the Turner Radio Broadcast report said.  "The experts went on to tell us the troubles would increase further to horrific tsunamis 1000 meters high, moving at 1200 kilometers per hour striking coastal regions around the Earth...  One expert even claimed that depending upon the size and gravity of the planet, and its angle of approach, the gravity of this other planet could actually STOP the Earth from rotating on its axis.  He likened it to a vehicle traveling at 1,000 miles per hour, and having the brakes slammed on; the resulting inertia of all objects on earth would cause them to continue moving while the earth was stopping; sort of like what happens in a car wreck when the car suddenly stops, but the passengers fly forward from their own inertia."

So that kind of sucks.  And after the article goes into all of that, they ask a few pertinent questions, such as "Could a planet be moving this fast?" (Yes), "Can gravity affect things at large distances?" (Yes), and "Isn't all of this pretty damn scary?" (Yes).

But then, after all of this terrifying talk, Turner Radio Network posted an update that suggested that a few teensy details about the foregoing story might be factually inaccurate.  First, (Kyle) Kaplan is a graduate student, not a professor of astronomy.  Second, he posted a second video in which he retracted what he'd said in the first, saying it was "a joke."

The most amazing part of all of this is that Turner Radio Network printed Kaplan's retraction, and posted a link to the video, and then said that they didn't believe his retraction.  Yes, you read that right; given the choice between (1) there being a huge rogue planet heading toward Earth, which was only observed by one graduate student amongst all of the astronomers in the world, and (2) some dumb college guy decided to play a prank and it got out of hand, they decided that scenario #1 was more likely.  "Who would want it retracted and why?" the TRN writer said, his eyebrows wiggling in a significant fashion.  "Well, if people think they're doomed, they may stop paying their taxes and their bills; there may be widespread panic and a breakdown of social order to the point of chaos.  The powers that be can't have any of THAT, can they?"

No.  They can't.  So our only other option is that a giant planet is going to hit the Earth this August.  q.e.d.

They end, though, with asking the right question: "Is this a HOAX?????? That's easy for all of you to verify: Grab a telescope and look at the coordinates yourself.  If there's a planet there, and you see it getting larger (i.e. closer) over a few nights, then this is real and we've got potential problems."  They give the planet's position -- at least as of a couple of days ago -- as Right Ascension: 04 hrs. 08 Min. 08 Sec.; Declination: 60 degrees 56 arc min. 43 arc sec.  So it should be easy enough to check.  It's sort of like the joke:  "I asked myself, 'Why is the baseball getting bigger?'  Then it hit me."

Me, I'm not losing sleep over it.  If there really were a planet heading our way, one or two other astronomers would have had a thing or two to say about it by now.  I'm just adding this as line #452 on the list of End of the World Predictions Wherein the World Did Not End, and sitting back and having a beer and waiting for #453.  I think the next one is gonna be zombies.  We haven't had a good zombie apocalypse lately.
Posted by Gordon Bonnet at 2:08 AM