Fiddling while the education system burns

It's late February, and if you're a teacher, you know what that means:

Time to start worrying if you'll have a job next year.

In my own school district, we're just starting to see the proposed cuts being announced.  And while out of respect to my friends and colleagues whose jobs are on the line I won't give any details about what's come out thus far, I will say: it ain't gonna be pretty.

The problem is, it hasn't been pretty for years.  This is the seventh year in a row that my little upstate New York school district has had major staffing cuts.  We've seen classes dropped, curriculum lost.  Veteran teachers are being reduced to half-time, are teaching in two different buildings, are teaching four and five different subjects, are teaching classrooms in which every available seat is occupied.  Other, less fortunate individuals have simply been axed.  And every year we're told that the administration is really, really sorry about all of this, that they and the School Board and the Board of Regents and the State Department of Education have the students' interest in mind and are doing their level best to Keep Excellence in Education.

When are we, as a nation, going to wake up and point this out as the falsehood it is?

Oh, it's not that any of them are setting out to harm children; but if that's the ultimate outcome, does that really matter?  Shouldn't someone who is responsible for the oversight of education recognize this, and have the balls to point it out?  And, perhaps, do something about it?  But no; we're stuck with the same antiquated system of school funding, that places a stranglehold on poor and rural schools, that puts local school boards in the Hobson's choice of either raising property taxes or else cutting school staffing to the bone.

And school boards are elected positions, and the votes come from residents, who pay property taxes.  Guess how the decision almost always plays out?

The problem is that this kind of thinking -- today's dollar, today's tax increase, today's elementary school student -- ignores the fact that schools represent an investment in the future.  We don't know yet which third-grader is going to be the next Krishna Shenoy, finding a way to give quadriplegics the ability to walk again.  Which will be a Jocelyn Brown, who developed a device to help infants with compromised respiratory systems to breathe.  Who could be a Paige Cramer, who discovered that an old cancer drug could be used to ameliorate the symptoms of Alzheimer's disease and Parkinson's.

And we're going to need the Shenoys, the Browns, the Cramers.  As a society -- and, perhaps, as a species -- we will face in the next couple of decades some of the most significant challenges we have ever seen.  Type-2 diabetes is rising so fast worldwide that doctors are calling it an "epidemic."  The effects of anthropogenic climate change are being felt across the globe.  (And sorry, deniers; it is happening, and it is anthropogenic.  The US National Academy of Sciences and the UK Royal Society issued a joint paper just yesterday that was unequivocal.  Sir Paul Nurse, president of the Royal Society, said, "We have enough evidence to warrant action being taken on climate change; it is now time for the public debate to move forward to discuss what we can do to limit the impact on our lives and those of future generations.")  Supplies of fresh water and clean air are imperiled; we are using fossil fuels and other resources at a rate that is unsustainable.

And what are our politicians focusing on?  Here in the US, state legislators are monkeying around with bills in twelve states that are versions of the "Turn Away the Gays" bill that was just vetoed in Arizona.  Think about it; our elected officials think that reenacting the Jim Crow laws is a higher priority than assuring that our children receive a solid education.

The problem is, much of the benefit from education is (1) unquantifiable, and (2) realized only in the future.  So, to our legislators, and (unfortunately) to many voters, it doesn't exist.  If you can't show that the damage being done here and now by funding cuts to schools is causing a drop in the Almighty Standardized Test Scores, then we must be doing just fine.  Never mind the larger class sizes; never mind the loss of electives, music, and the arts.  Never mind the demoralized teachers who are right now reconsidering their choice of a career.  Never mind the students who, if you don't afford them the opportunity for learning and expanding their horizons, will never accomplish what they could have accomplished, for their own good and for the good of humanity. 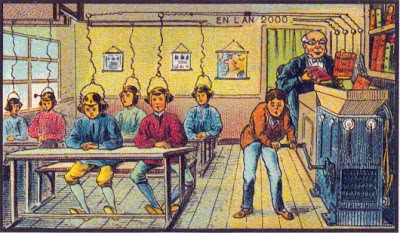 [image from a ca. 1899 postcard, courtesy of the Wikimedia Commons]

For some, that's not an immediate enough problem to warrant doing anything about it.  Easier to keep doing what we've always done, figuring that we'll find our way forward somehow.  But remember; like canoes, societies have tipping points.  They don't often flip as spectacularly as canoes do, which means that we can pass the point of no return without being aware of it.  The signs of an incipient crash are already here; failing inner-city schools, poor rural school districts that are merging in order to survive or else going bankrupt, overcrowded classrooms with nothing to offer but the bare-bones graduation requirements.  We have to ask, as a society, if we are willing to accept this -- seeing a whole generation growing up without the skills, knowledge, enrichment, creativity, and critical thinking ability that will be needed to lead us forward.

If the answer is no, and yet we fail to act, we will have no one to blame but ourselves.
Posted by Gordon Bonnet at 2:01 AM