On the universal genetic code, glow kitties, and human/alien hybrids

One of the most powerful pieces of evidence of our common ancestry with every other life form on Earth is that we all read the genetic code the same way.  The RNA codon chart, the work of such giants in the field of genetics as Marshall Nierenberg, Francis Crick, and James Watson, works equally well for every species from bacterium to petunia to wolf spider to human.  It's the basis of genetic engineering; you can take an embryo of a cat, and insert a gene from a jellyfish that in the jellyfish produces a phosphorescent protein, and with luck and skill you will end up with... 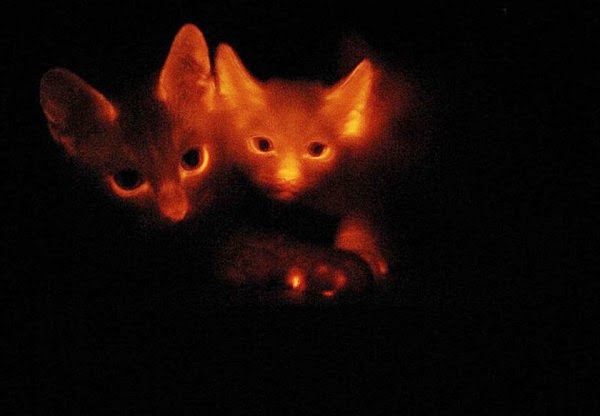 The cats' genetic decoding mechanisms read the DNA in exactly the same way as the jellyfish did, and therefore assemble the glow-in-the-dark protein in precisely the same way.  Put simply, every organism on Earth speaks the same genetic language.

It's why, as I was discussing with some students just yesterday, Mr. Spock is vastly improbable.  That a DNA-based life form could arise on another planet is entirely plausible; the building blocks of DNA, called nucleotides, are apparently rather easy to produce abiotically.  But the likelihood that the decoding protocol would have evolved precisely the same way on Vulcan as it did on Earth, and therefore result in two species that can interbreed, is about as close to impossible as anything I can think of.  So however tantalizing a plot element it was to have the tortured, half-emotional and half-stoic First Officer struggling to control his human side with logic, it's much more likely to be a simple biological impossibility.

If the extraterrestrials even turn out to be humanoid, and have the right... um... equipment to engage in some hot alien/human bow-chicka-bow-wow in the first place.

Interestingly enough, given the morning's rather odd topic of conversation, that yesterday afternoon I ran into a website that claims that not only are human and alien DNA compatible, but that we are hybrids already.  Well, at least some of us are.  Frankly,  it's a little hard to tell what exactly the writer is claiming:


Civilizations from parallel realities and parallel dimensions similar to our own reality have been manipulating human DNA from the beginning of our recorded history and it is highly likely that all of this activity over the decades is the visually elusive air traffic of beings involved in one singularly focused mission involving humans.  This genetic program is a part of our human history,  it is here with you and I now and will continue flowing down line into humanities future.  It is time to accept the fact that we are hybridized humanoid beings with alien DNA.

The problem is, human DNA is pretty much like the DNA of any other terrestrial species, as I mentioned earlier.  There's nothing alien about it.  But this doesn't stop the owner of the website, The Hybrids Project, from claiming that we're somehow... different.  And getting more different all the time:


Hybridization of a conscious humanoid appears to be quite complex. Evolution is not ruled out, but there is a point at which highly advanced humanoids begin to upgrade other humanoids. The benefits of this process would, at its simplest, be the perpetuation of life, intelligence and consciousness. This is a logical expectation within an infinite multiverse and likely a process that spans countless worlds and vast expanses of time as we know it. Earth is but a part of the process and not the process itself. We will come to realize that we are part of a larger galactic family and the relatives are coming to introduce themselves.

I have to admit that we certainly could use an upgrade, given some of the behavior we like to engage in.  But the kind of thing that this website goes on to describe isn't, as far as I can tell, much of an improvement.  The alien species he describes are all a little... sketchy.  We have the Tall Grays and the Short Grays, who differ only in size and otherwise are your typical bald, skinny gray aliens with enormous black eyes.  Then there are the Tall Whites, which are bald, skinny white aliens with enormous blue eyes.  None of these, frankly, are my type.  I'll stick with plain old Earth women, thanks.

At least a bit more appealing are the Tall Blonds, the male version of which looks a little like Orlando Bloom.  But then, finally, we have the Mantid Beings, which are just horrifying.  The idea of a human/mantid hybrid would imply that there was some way for a human to have sex with what amounts to a giant grasshopper, a mental image which I really didn't need to have bouncing around in my skull.  (And about my decision to pass it along to you: "You're welcome.")

By the way, if you're curious to see what any of these things look like, I encourage you to peruse the website, which is chock-full of artists' depictions and is really highly entertaining.

Also on the website are all sorts of descriptions of abduction experiences, in which Earthlings were captured and brought on board ship and examined, probed, and worse by various members of these alien species.  The hybrid children thus produced, the website tells us, "are quite different and far more advanced than you and I and thus are currently living off world out of harm's way."  Which is pretty convenient.  All of the kids I see on a day-to-day basis seem like regular old people to me.  None of them have gray skin or black eyes or look like Orlando Bloom or a giant praying mantis.

So, anyway.  As much as I love the idea of extraterrestrial life, the tales of abduction and hybridization and so on seem to me to be not only delusional, but biological impossibilities.  Much as some people don't like the idea, Homo sapiens forms nothing more than a tiny little blip in a continuum with other terrestrial life forms -- any interesting features we have, like our (relatively) large brains, are perfectly well explained by the evolution and genetics we already understand.

Which, in some ways, is too bad.  Mr. Spock was kind of cool.  And if I'm wrong, let me just mention to any alien life forms who might be looking in my direction; I'm already spoken for.
Posted by Gordon Bonnet at 2:06 AM