I have sad news for anyone who is, like me, considers cryptozoology to be one of their favorite guilty pleasures:

Yes, Nessie, a.k.a. The Loch Ness Monster.  That coy pleisiosaurid, featured in countless blurry photographs, many of them outright fakes.  That long-necked Scottish dinosaur who has starred in movies, has been the basis of a huge tourist industry, and was mentioned as a disproof of evolution in a biology textbook used in some Louisiana charter schools -- a textbook that turned out to be written by "Accelerated Christian Education, Inc."

The claim that Nessie has gone to that Big Jurassic Park in the Sky originated, as so many dubious claims do, in The Daily Mail.  The Daily Mail is, honestly, second only to The Weekly World News in providing the public with prizewinning journalistic coups running under headlines like "Miley Cyrus Pregnant With Bigfoot's Love-Child."  (Okay, I have to admit that I've never actually seen an article with that headline, but if there was one, I bet it would be in The Daily Mail.)  The Daily Mail is so often wrong that its numerous detractors call it The Daily Fail.

So, why, you might ask, are we mourning Nessie's untimely demise?  Did someone find bones?  Did a giant carcass wash up on the rocky shore of Loch Ness?

Of course not.  That would constitute hard evidence.  The reason that people have come to the conclusion that the Loch Ness Monster has joined the Choir Eternal is...

... that nobody has seen her lately.

I'm not kidding.  Gary Campbell, a "veteran Nessie spotter" who keeps a register of sightings, says that her death is the only possible explanation of the lack of sightings.  "It's very upsetting news, and we don't know where she's gone," Campbell said, in a quote that I'm not nearly creative enough to make up.  "The number of sightings has been reducing since the turn of the century but this is the first time in almost 90 years that Nessie wasn't seen at all.  Pretty much everyone now carries a camera with them in their Smart Phone - this allows then to snap what they're seeing and means that we don't just have to rely on eyewitness evidence.  As last year has shown, all the pictures and videos taken can prove to the expert eye that it wasn't Nessie that was being filmed."

Right.  The fact that since digital photography has improved, along with the ability to detect faked digital photography, we haven't had a single photograph of Nessie, means that she died?  You can't think of another reason, such as the possibility that in our day of everyone carting around cameras, it's becoming increasingly difficult to create convincing fakes?

Another Nessie enthusiast, Rupert Adams, added that it's not that there have been no photographs submitted for consideration:  "Although we had three entries, one was a wave, one a duck and the other wasn't from Loch Ness."

Whooo.  That certainly leaves me feeling the need for an explanation.  The Truth Is Out There, y'all. 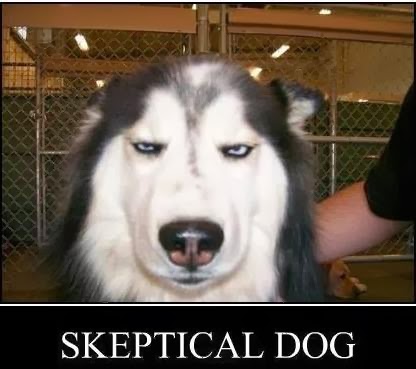 Skeptical Dog is unimpressed by your argument.

And if that wasn't enough, the article in The Daily Mail went on to suggest, in all seriousness, that maybe Nessie wasn't dead, she was just "on holiday in Australia," because someone took a photo of a bay in Queensland showing a creature in the water that screams "Fake!" so loud that my ears are ringing.  (The photograph is copyrighted, so if you want to see it, you'll just have to throw caution to the wind and go to the story in The Daily Mail, linked above.)

So that's our venture into deep water, both literally and figuratively, for today.  Me, I'm wondering what they'll come up with next.  I hope that it's about Bigfoot's Love-Child.  At least that's more cheerful than a cryptozoological obituary.
Posted by Gordon Bonnet at 2:06 AM