There's a general rule about claims of the paranormal, vis-à-vis the amount of hard evidence thereof, and on first glance it's a little counterintuitive.  It would seem that the likelihood of such claims being true would be directly proportional to the number of people who say they've seen whatever it is -- ghosts, UFOs, Bigfoot, or whatever.  Assuming equal (and low to nonexistent) hard evidence in favor, the only thing we have to go on is eyewitness testimony, and the more there is of that, the better supported the claim is.

In fact, it is exactly the opposite.  The likelihood of a bizarre claim being true, in the absence of evidence, is inversely proportional to the number of eyewitness claims.

Let's take something for which we have exactly zero tangible, scientifically admissible evidence -- Bigfoot.  We hear cries of indignation from Squatchers that we skeptics are being unfairly dismissive.  "How can all of the eyewitness accounts be wrong?" they say.  And it sounds reasonable -- at first.

But think about it.  Let's accept, for the moment, that the Squatchers are right, and there is a large proto-hominid species out there -- with a large enough population not only to be reproductively viable and stable, but to give rise to frequent sightings.  (And if you want to see how many sightings do get reported every week, just check out sites like Bigfoot Field Journal.  You'll be astonished.)

So, we've got thousands of very large animals out there, being seen every week -- and not once, never, has one of them left behind a carcass, a clump of hair, a bone, or a tooth demonstrably of proto-hominid origin?  With that many eyewitness sightings, there should be at least one incontrovertible piece of hard evidence by now.  That there isn't is fairly damning.

In reality, of course, a rare, intelligent, wary cryptid should produce almost no sightings at all.  Look, for example, at how infrequently people see bobcats -- a shy, nocturnal species that is also amazingly common.  There are an estimated 30,000 bobcats in New York state -- which, in 2006 and 2007, resulted in only a little over 100 sightings each year.  I've lived for over twenty years in a rural part of upstate New York, spent lots of time out in the woods, and I've never seen one.

Of course, that's a serious blow to the Squatchers, and these are not folks who will take such a thing lying down.  The Bigfoots have ways of not being seen, they say.  They bury their dead -- thus, no bones, no teeth, no skins.  Beyond that, things get even wackier.  A Squatcher named Linda Jo Martin thinks that the reason they get away is that they're telepathic, so they hear our thoughts as we approach and escape, especially if we were intent on capturing or (heaven forfend) shooting one.  Another Squatcher, the amusingly-named Kewaunee Lapseritis, thinks that the Bigfoots are not only psychic, they're in contact with space aliens, and get away on spaceships if they are in danger.

But that's bush league crazy compared to what I came across yesterday, advanced as a serious claim on the wonderfully wacky site Cryptomundo; the reason we can't find Bigfoots, or any hard evidence thereof, is because they've developed cloaking ability.

If you're like me, your first thought was, "No, that's not Bigfoot; I believe you're thinking of the Klingons."  But it appears that they're serious.  Here's a direct quote:


One of the most heated subjects of debate in the bigfoot world is about the possibility that the creatures elude us so well because they have some kind of “cloaking” ability that no other creature is known to possess. Some witnesses claim this ability is in fact real, while others scoff. But most, like me, just want a clear answer…and some visual proof wouldn’t hurt either.

This demands that we ask the question of how you could have visual proof of something that can become invisible.  But that thought evidently never occurs to them, as the author goes on to describe a... well, I guess I'll call it a "sighting," for want of a better word... by a fellow named Dave Moser in North Carolina:


Our group was on a planned walk down a hard packed dirt trail, south of our camp. Many in the group have had BF experiences on this tail before which parallels a ridge to the west and east so you are walking in somewhat of a valley. A team of 6 had left the campground around 2330 and may have gone close to a ¼ mile down the trail when I observed the 4 team members who were approximately 70-80 yards ahead of me had stopped and were looking to the west or right side of the trail. It’s customary for me to stop and observe the area with my Thermal camera from the rear of the group. I prefer this position because I like to scan behind us to see if anything is following and it also gives me a wider angle of view of what the front team may be observing. The 5th team member was approximately 8-10 feet ahead of me and had G3 night vision binoculars. I noticed that one of the front team members had stepped a few feet off the road in the woods. He was also using a thermal imager but did not have any noticeable heat signatures that I know of. After talking to him yesterday to find out the reason he had stopped he provided the following statement:

“I hear something moving to the left of trail. What at first was a deer making a distress call and then thumping noise like someone or thing was stomping its foot. I do not think it was a deer making the stomping noise. When I walked off the trail and staying by the tree, I felt like I was being watched. I had a sense that whatever it was it was now in front of me about 50 yards.”

Nothing was observed or heard during the brief stop at 12:03am early Saturday morning but upon review my first indication to there being something there was the leaves shuffling. I knew right away that no one was in the woods to the left or right of me so a rewind was required. The rest of the midnight hike was uneventful except for the return trip to camp. One of my team members usually has an EMF detector on his persons and as we passed the spot where the figure was captured on the Thermal and about 50 yards north his EMP detector went ballistic, I mean a full pegged out hit that lasted for close to a minute beeping loudly. Although nothing was ever seen or discovered to cause the deflection it was a strange coincidence to say the least!

To Moser's credit, he states outright that he doesn't think this was a "cloaked Bigfoot," although how anyone can even type that phrase without guffawing is beyond me.  For one thing, if an animal can turn invisible, how could it see?  Its eyes, including the lens and retina, would suddenly have the same transparency and refractive index as air, meaning that light would go right through them.  (Right through its whole head, in fact.)  So if Bigfoot can turn invisible, it would also become instantaneously blind, which would explain why it was shuffling through the leaves and bumping into things.

On the other hand, why am I even addressing this seriously? 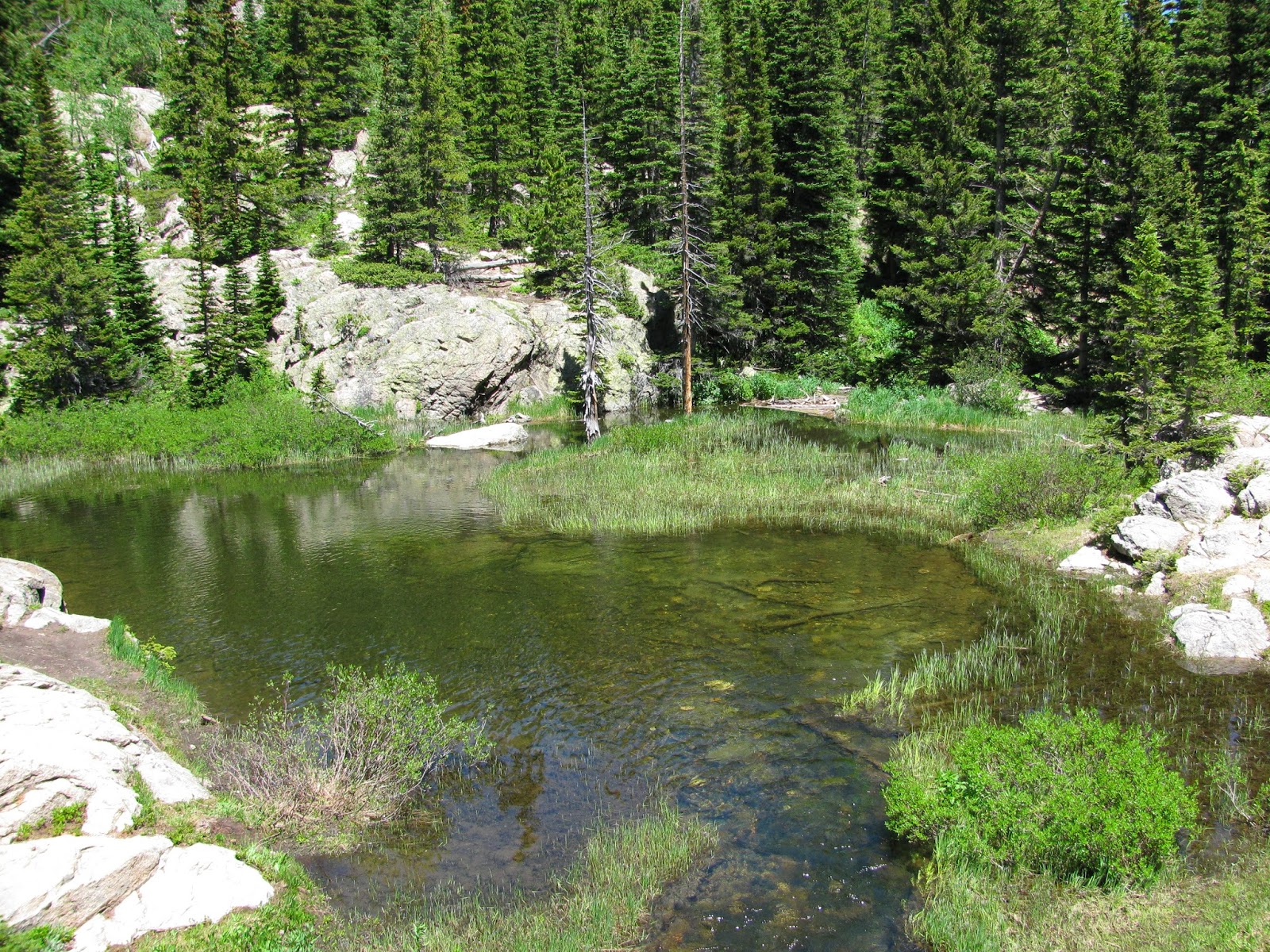 A photograph I took in Colorado.  There is an invisible cloaked Bigfoot in the lower right of the shot.

The bottom line is that if your evidence:sightings ratio is so low that you have to make appeal to telepathy, UFOs, or advanced cloaking technology to explain to skeptics why you don't have the goods, then you should probably just give up.  Harsh, but realistic.

Spend your time looking for bobcats, instead.  They're really cool-looking, and as an added bonus, they actually exist.
Posted by Gordon Bonnet at 1:42 AM