Sometimes, with folk tales, you can pinpoint exactly when a legend entered the public awareness.  Someone writes and publishes a story in one of those "True Weird Tales" books or magazines; a report of a haunting makes the local news or newspaper; or, more recently, someone makes a claim in a blog, on Twitter, or on Facebook.

Such, for example, is the famous story of the tumbling coffins of Barbados, about which there seems to be zero hard documentary evidence -- but which first appeared (as a true tale) in James Alexander's Transatlantic Sketches, and which has been a standard in the ghost story repertoire ever since.  Likewise, the story of Lord Dufferin and the doomed elevator operator has a very certain provenance -- Lord Dufferin himself, who enjoyed nothing more than terrifying the absolute shit out of his house guests by telling the story over glasses of cognac late at night. 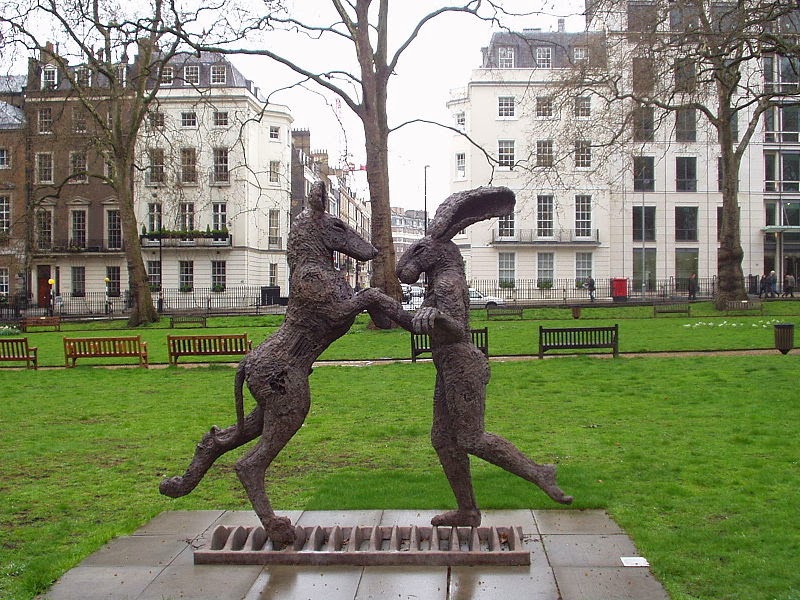 [image courtesy of photographer Sophie Ryder and the Wikimedia Commons]

The house itself is a four-story structure, built in the late 18th century, that looks innocent enough from the outside.  Until 1827 it was the home of British Prime Minister George Canning, which certainly gives it some historical gravitas right from the outset.  But gradually the ownership descended down the socioeconomic scale, and in the late 1800s it had fallen into disrepair.

At some point during that interval, it got the reputation for being haunted.  Apparently, it's the upper floor that is said to be the worst; some say it's occupied by the spirit of a young woman who committed suicide by throwing herself from one of the upper windows, others that it's haunted by the ghost of a young man whose family had locked him in the attic by himself, feeding him through a slot in the door until he went mad and finally died.  Whatever the truth of the non-paranormal aspects -- the suicide of the young woman, or the madness and death of the unfortunate young man -- it's clear that neighbors viewed the house askance during the last two decades of the 19th century.  And that's when the legends really took off.

The earliest definite account of haunting comes from George, Baron Lyttleton, who spent the night in the attic in 1872 after being dared to do so by a friend.  He saw (he said) an apparition, that appeared to him as a brown mist, and that terrified him -- he shot at it, to no apparent effect, and the next morning found the shotgun shell but no other trace of what he'd fired at.  Lyttleton himself committed suicide four years later by throwing himself down the stairs of his London home -- some say, because he never recovered from the fright he'd received that night.

In 1879, Mayfair ran a story about the place, recounting the then-deceased Baron Lyttleton's encounter, and also describing the experience of a maid who'd been sent up to the attic to clean it, and had gone mad.  She died shortly afterward in an asylum, prompting another skeptic, one Sir Robert Warboys -- a "notorious rake, libertine, and scoffer" -- to spend the night, saying that he could handle anything that cared to show up.  The owner of the house elected to stay downstairs, but they rigged up a bell so that Warboys could summon help if anything happened.  Around midnight, the owner was awakened by the bell ringing furiously, followed by the sound of a pistol shot.  According to one account:


The landlord raced upstairs and found Sir Robert sitting on the floor in the corner of the room with a smoking pistol in his hand. The young man had evidently died from traumatic shock, for his eyes were bulged, and his lips were curled from his clenched teeth. The landlord followed the line of sight from the dead man's terrible gaze and traced it to a single bullet hole in the opposite wall. He quickly deduced that Warboys had fired at the 'Thing', to no avail.

The house was (according to the legend) left unoccupied thereafter, because no one could be found who was willing to rent it.  This is why it was empty when two sailors on shore leave from Portsmouth Harbor, Edward Blunden and Robert Martin, decided to stay there one foggy night when they could find no rooms to rent.  They were awakened in the wee hours by a misty "something" which tried to strangle Martin -- beside himself with fright, he fled, thinking his buddy was right behind him.  He wasn't.  When he went back into the house the following morning, accompanied by police, he found the unfortunate Blunden -- with his neck broken.

What's interesting about all of this is that after the Mayfair story, the whole thing kind of died down.  It's still called "the most haunted house in London," and figures prominently on London ghost tours, but it was purchased in 1937 by Maggs Brothers Antiquarian Book Dealers, and has shown no sign since that time of any paranormal occurrences.  And it's been pointed out that the story The Haunted and the Haunters by Edward Bulwer-Lytton -- published in 1859, right around the time the rumors of the haunting started -- bears an uncanny resemblance to the tale of 50 Berkeley Square, especially the account of the unstable Baron Lyttleton.

In my opinion, the entire thing seems to be spun from whole cloth.  There's no evidence that any of the paranormal stuff ever happened.  In fact, "Sir Robert Warboys" doesn't seem to exist except in connection to the haunted attic; if there is a mention of him anywhere except in accounts of his death at the hands of the misty "Thing," I haven't been able to find it.  As far as "two sailors from Portsmouth," that has about as much factual accuracy as "I heard the story from my aunt who said her best friend in high school's mother's second cousin saw it with her very own eyes."  And Lyttleton, as I've said, doesn't seem like he was exactly the most mentally stable of individuals to start with.

But I have to admit, it's a hell of a scary tale.  Part of what makes it as terrifying as it is is the fact that you never see the phantom's face.  As Stephen King points out, in his outstanding analysis of horror fiction Danse Macabre, there are times when not seeing what's behind the door is way worse than opening the door and finding out what it actually is.  So even though I'm not buying that the place is haunted, it does make for a great story -- and 50 Berkeley Square will definitely be on my itinerary when I have an opportunity to visit London.
Posted by Gordon Bonnet at 4:53 AM