It's a phenomenon we've seen here before; the tendency of people to wave photographs around, claiming that they are evidence of the paranormal despite the fact that the image quality is generally lousy (either from magnification and subsequent pixillation, or else from a photograph that wasn't very good to begin with).  Blurry photographs, of course, leave your mind open to interpreting what you're looking at, which is dangerous ground if you're trying to do so skeptically and fairly.  If you add to that a dash of pareidolia, a shot of wishful thinking, and a heaping handful of being told ahead of time what you're seeing, and you've got a nice recipe for proving the existence of ghosts, aliens, Bigfoot, and pretty much whatever else you want.

I ran into two really good examples of that a couple of days ago.  The first one was presented over at The Crypto Crew as being a ghost standing behind a grieving man in a cemetery: 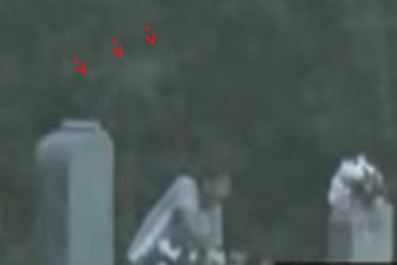 What immediately struck me about this one is that if it hadn't been for the three red arrows, I would never have thought there was anything odd about this photograph in the first place.  Even with the arrows it took me a while to see the "ghost."

A second one has a decidedly darker implication.  I first saw it on Facebook, but have since run into it on Twitter and a couple of the dicier paranormal sites.  It purports to show a dying woman in a hospital bed -- and a demon standing over her, presumably ready to whisk her soul off to hell as soon as she crosses into the netherworld: 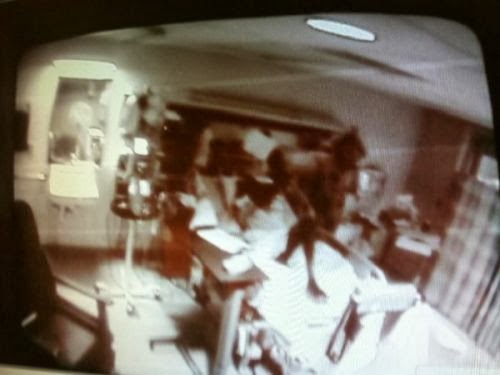 Well, even over at Unexplainable.net they're not buying this one, and heaven knows they've had some pretty sketchy stuff over there and haven't raised an eyebrow.  Here's how they parse the Demon Photograph: 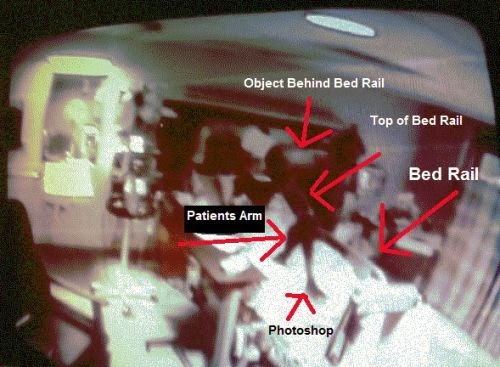 What I find most interesting about this is how our brains force an interpretation -- once we've been told that there's a demon there, we see the demon even if (like me) you don't believe in demons in the first place.  Grainy data can be turned into anything -- even, apparently, by skeptics.

It also strikes me how you never get a clear photograph of any of this stuff.  In these days where the average cellphone shot has better resolution than a photograph taken with an expensive camera did twenty years ago, why hasn't anyone been able to take a photograph that shows any real detail?  (Of course, I have a favored answer to this, but it's not one that's popular amongst the woo-woos.)

So that's the latest from the Creepy Photograph Department.  Myself, I think the guys in Quality Assurance need to have a look over there, because things seem to be slipping a little.  Next thing you know, we'll be seeing the folks over at Phantoms & Monsters giving up on paranormal photographs, and at that point we'll really know we're headed to hell in a handbasket.

Just like the poor lady in the hospital bed.
Posted by Gordon Bonnet at 5:00 AM