Big brawl over the Big Bang

So apparently, there are a number of people who have their knickers in a twist over the new Cosmos.

The young-Earthers are, predictably, upset with host Neil deGrasse Tyson's repeated mentioning of evolution.  Dan Dewitt, writing for Baptist Press, was perturbed by the whole message, but showed evidence of a severe irony deficiency when he stated that Tyson's Cosmos was "regurgitating... old myths... and proposing theories that have zero physical evidence."

Then we have the climate change deniers, who were torqued by a mention of anthropogenic climate change in each of the first two episodes, with more likely to come.  Jeff Meyer, writing at Brent Bozell's conservative outlet Media Research Center, said, "...deGrasse Tyson chose to take a cheap shot at religious people and claim they don't believe in science, i.e. liberal causes like global warming."

Well, yeah.  Because, largely, they don't.  And climate change is hardly a "liberal cause," unless you accept the idea that in Stephen Colbert's words, "reality has a well-known liberal bias."

Then, we have the people who object to the idea of the Big Bang, which was more or less the topic of the entire first episode.  Elizabeth Mitchell, writing over at the frequently-quoted site Answers in Genesis, had the following to say:

What makes Mitchell's comment even more ludicrous than it would be if read alone is how it appears in juxtaposition with the news from two days ago, in which we find that scientists working in Antarctica have conclusively proven the existence of gravitational waves -- remnants of quantum fluctuations that were created in the first 0.00000000000000000000000000000001 seconds of the universe's existence.  (For those of you who don't want to count, that's 31 zeroes; if you're conversant in scientific notation, it's 10-32 seconds.) 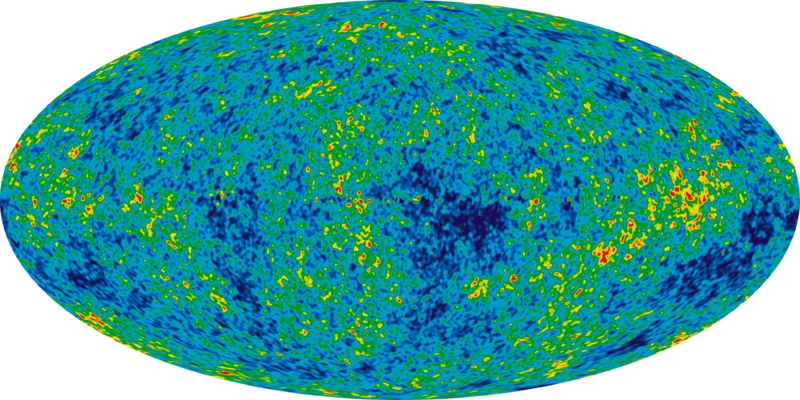 This map represents nine years' worth of data from the Wilkinson Microwave Anisotropy Probe, which shows minor temperature fluctuations registering in the microwave region of the spectrum -- fluctuations caused by inflation that occurred 13.7 billion years ago.  [image courtesy of NASA, the WMAP team, and the Wikimedia Commons]

I'm sure Mitchell would shriek about "observational" versus "historical" science, and how I wasn't there during the Big Bang to observe what the universe was doing (and given what was happening at the time, I'm damn glad I wasn't).  But keep in mind that the gravitational waves that have been observed were predicted years ago by Andrei Linde, one of the chief architects of inflation theory -- a model of Big Bang cosmology that has now been given a significant leg up over other theories of the early universe.

The synchronicity of Mitchell's snarky little commentary, followed by the triumphal announcement of Linde's vindication, makes me think that if there is a god, he's got quite a wicked sense of humor.  It puts me in mind of a quote from Voltaire: "God is a comedian playing to an audience that is afraid to laugh." And if you want to see something uplifting to counterbalance Mitchell's ignorant criticism, watch this video of Linde being told by physicist Chao-Lin Kuo that the existence of gravitational waves had been proven.  It'll make you smile.

But back to Cosmos.  I do find it heartening that Tyson isn't pussyfooting around on these subjects.  Sagan, partly driven by the fact that the original series was filmed in the 1970s, had to be a little more circumspect about what he said, a little more diplomatic.  Myself, I think Tyson is taking the right approach.  I'm sorry if you don't "believe" in the Big Bang, in evolution, in climate change.  You're wrong.  You can continue to claim that the evidence doesn't exist, or is inconclusive or equivocal.  You're wrong about that, too.  If you'd like to remain ignorant of the reality, that's entirely your prerogative, but you can no longer expect the rest of us to go along with you out of some odd notion that ideas, however ridiculous they are, deserve respect.

Time to play hardball, people.
Posted by Gordon Bonnet at 2:04 AM