Bring out your dead!

I have, at times, been accused of selecting only the most grotesquely absurd examples of woo-woo belief to examine in this blog.  Thus, say my detractors, avoiding the necessity of answering difficult questions about more plausible, rational, and scientific claims.

To which I say: maybe.  I don't think I really shy away from odd (but plausible) ideas; there are a good many claims to which I give my stock response of, "The jury's still out on that one," and which I am eager to consider.  (An obvious example is the existence of extraterrestrial intelligence.)  But if I sometimes fall prey to the temptation of going for the low-hanging fruit, I can excuse myself on two bases:
As an example, take the article that popped up on The Freethinker yesterday, which I had to read twice to convince myself that I wasn't falling victim to Poe's Law.  The title?  "Evangelical Christians Want Access to More Corpses... To Hone Their 'Raising the Dead' Skills." 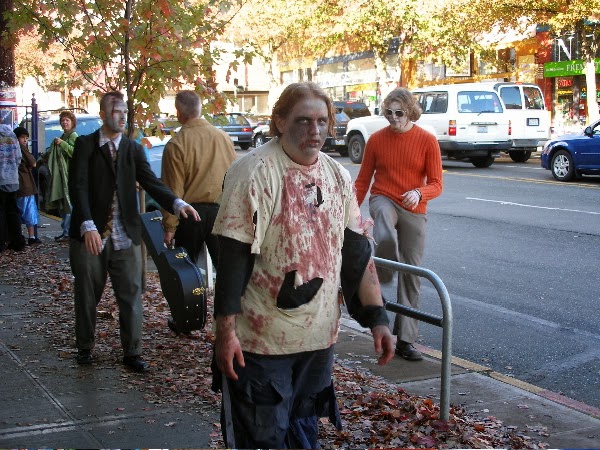 I'd like to be able to tell you that this isn't exactly what it sounds like... but it is.  Tyler Johnson, of Bethel Church, Redding, California, runs something called "One Glance Ministries" -- and an integral part of this is the "Dead Raising Team," about which Johnson himself has the following to say:


The DRT offers a service of support to any family that is grieving the loss of a loved one.  In addition to giving the bereaved spiritual and emotional support, our team of trained ministers will offer prayers of resurrection on the behalf of the deceased.  Handling each situation with the utmost sensitivity, our team travels to the funeral home, morgue, or family's home where the deceased is being kept.  Upon arrival, we spend time in prayer with the family, as well as the deceased.  We will stay as long as we are needed.  Since it was started, the DRT has comforted families in the midst of grief, as well as having eleven resurrections to date as a result of their prayers.  If this is a service you would like to make use of in the midst of your pain, please contact us as soon as possible.  Nothing is impossible with God.

Call me a Doubting Thomas, but after reading the mention of the "eleven resurrections" I wanted to type in [Source Citation Needed!].  But unfortunately, Johnson isn't forthcoming with details.  As the Freethinker article put it:


Johnson is unwilling to provide successful case studies. And in general, the proof that believers cite is a bit unconvincing ­– for example, there is an American heart surgeon who allegedly brought a heart attack patient back from the dead with prayer … oh, and a defibrillator.

Other doctors find the story entirely unremarkable. One wonders why.

On the DRT website, you can check out the details of "training," which include sessions on "The Theology of Dead Raising" and "The Practicals of Dead Raising."  I would expect the latter to be especially... informative.

I'd like to say that this kind of thing is limited to the US, but apparently there are also lunatics of this stripe in the UK.  Again, from the article in Freethinker:


Alun and Donna Leppit... [are] a British couple who are convinced that the dead can be raised through the power of prayer.

During the course of the [BBC 4] broadcast, Donna lamented that there aren’t too many corpses in the UK that they can practice on.

The one that they did try to resurrect to was Donna’s brother,  who died of a heart attack.

By the time they got to the mortuary, he had been dead for eight hours. They prayed over him for nearly an hour, and although at one stage they thought they saw him move, that was as good as it got.

Are they discouraged?  "Not at all," says Alun.  "Practice makes perfect," adds Donna. "But in this country, we don’t often get access to dead bodies."

No, Donna, and there's a reason for that.

Funny that there's no Amputee-Restoration Team, isn't there?  Seems like amputees eager to have god (with whom Nothing Is Impossible) restore their lost limbs would be easier to come by than corpses.  Wonder why they don't give that a shot?

Maybe because they know it wouldn't work -- and the amputee would still be around, sans limb, to give lie to the whole proceeding.

Okay, I know all Christians aren't like this, and I won't fall into the trap of judging all of them on the basis of a loony few.  But in my experience, the loony ones are often the loudest.  Look at Michele Bachmann.  (Not directly!  Wear protective eyewear!)  Her shrill neo-Puritanism draws huge crowds -- despite the fact that she has stated outright that America should be run on the basis of "a biblical view of law."  (And has also said, "If I felt that’s what the Lord was calling me to do, I would do it. When I have sensed that the Lord is calling me to do something, I’ve said yes to it.")

A "biblical view of law" would include, presumably, doing things like stoning disobedient children and burning down towns where there are unbelievers, since those are both clearly mandated in the Old Testament, along with the prohibition against homosexuality she is so fond of quoting.

So I'm perhaps to be excused for being a little wary when someone says, "Oh, Christians aren't like that!"  Maybe many Christians aren't.  Maybe even most aren't.  But if enough of them are potential clients of the Dead Raising Team that people like Michele Bachmann (and Jim DeMint, and Sam Brownback, and Ted Cruz) can get elected, then there's something seriously wrong.  (Read this article in Patheos if you are still in doubt.)

So it's easy for rationalists to laugh at the Dead Raising Team and the rest of the wacko fringe, but there is a significant percentage of Americans who believe in such things whole-heartedly.

So maybe the "low-hanging fruit" isn't quite so facile a target as it may have seemed at first.
Posted by Gordon Bonnet at 2:03 AM