Calling all people who have found a Bigfoot bone!  Or a Tatzelwurm tooth!  Or Huaychivo hair!  Or a Chickcharney claw!

The International Cryptozoology Museum wants to talk to you.

Loren Coleman, of Cryptozoonews, has put out an all-call for anyone who claims to have hard evidence of... well, of anything of cryptozoological note.  To quote Coleman's article:

The chosen samples will be tested at the company’s cost and the detailed results will be shared with the donor. Well-known, world-renowned genetic scientists will be working with this project. The scope of the project is international. The range of cryptids being surveyed encompass the entire realm of cryptozoology, from the standard organic samplings of Yeti, Yeren, Yowie, Sasquatch, Lake Monster, Mapinguari, Globsters to biological indications of new populations of Coelacanths, Thylacines, Ivory-Billed Woodpeckers and more. All evidence will be considered and screened open-mindedly.

All of which is at least approaching the topic the right way.  So if you think you might have some random chunk of cryptid in your closet, consider sending it in.  To see what your chunk might be from, you might start by checking out the canonical guide to cryptids on Wikipedia, which reads like a veritable petting zoo of animals that probably don't exist.

Still, I'm open to having my views revised, and there's nothing for that like hard evidence.  I'm hoping that when the inevitable flood of hair and bones and teeth start to pour in, the International Cryptozoology Museum will get someone reputable to do the genetic testing, and not some crank with an agenda and a dubious grasp on reality (I'm looking at you, Melba Ketchum).

So it sounds like the whole thing has more scientific merit than the continuous stream of eyewitness accounts and blurry photographs that is all we've had up to this point.  So see what you can find, and send it in.  As I've said more than once: I'm a doubter, yes, but this is one case in which I would be beyond delighted to be proven wrong.  I mean, really -- I'm a biology teacher, and my area of specialization is evolutionary biology, so how could I not be thrilled if someone finally proved the existence of a proto-hominid, or a holdover from the dinosaur era, or even some animal thought to be previously extinct like the thylacine, or sabre-toothed tiger, or moa?

Man, that would be cool.  I would, however, prefer not to have moas stomping around in my general vicinity.  If you don't know what those are -- or, more accurately, were -- they were like badass ostriches on steroids.  They were, in a word, scary. 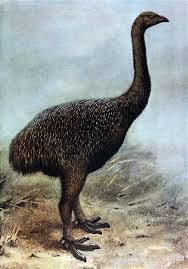 Be that as it may, it would still be way cool to find evidence of any of them.  So I encourage you to participate, if you actually have anything in your possession that you think might be relevant.  Who knows?  Maybe someone does.  It reminds me of what Michio Kaku said about UFO sightings: "You simply cannot dismiss the possibility that some of these UFO sightings are actually sightings from some object created by an advanced civilization, a civilization far out in space, a civilization perhaps millions of years ahead of us in technology...  When you look at the handful, the handful of cases that cannot be easily dismissed, this is worthy of scientific investigation.  Maybe there's nothing there.  However, on the off chance that there is something there that could literally change the course of human history, so I say: let the investigation begin."

Exactly, Dr. Kaku.  So despite my standing as a skeptic, I want to go on record as wishing the International Cryptozoology Museum all the luck in the world.

Let the investigation begin!
Posted by Gordon Bonnet at 2:19 AM