I only have one real phobia, and that is: dentists.

I know where this phobia came from.  My childhood dentist, Dr. Webre, was not of the kind, gentle, "you seem to be uncomfortable, do you need more Novocaine?" variety.  Dr. Webre graduated from the Josef Mengele School of Dentistry.  Once, when I was about nine years old, he was filling a small cavity, and I could still feel the drill.  I tried to man up, and was doing my best not to scream, but evidently I flinched a little.  Dr. Webre's response?

"Stop that jerkin' around, or this drill is going to go right through your face."

He said this to a nine-year-old child.

I know, as an atheist, that I don't believe in hell, but I'd almost be willing to revise my belief system if somehow it would mean that Dr. Webre was there.

Oh, and I haven't mentioned that when he removed my wisdom teeth, he broke one of them.  Into three pieces.

So, like I said, it's kind of understandable that I have an absurdly powerful fear of dentists.  I start feeling nauseated about a week before an appointment, and it doesn't go away until I'm in the car driving home afterwards. 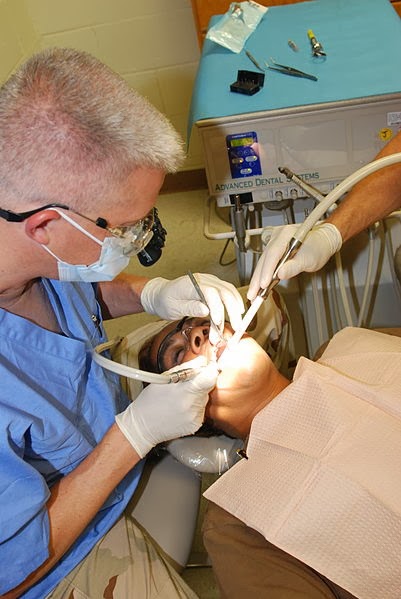 Doctors have made great strides in treating deep-seated phobias.  The trick is disconnecting the limbic system fear-response from whatever the stimulus is, and is often accomplished through a combination of medications and exposure therapy.  The problem is, exposure therapy means... exposing yourself to the cause of the phobia.  In my case, it was much easier just to avoid the whole thing and hope that my teeth wouldn't fall out.

Now, let me say up front that my current dentist is awesome.  He has this wonderful thing called "sedation dentistry" in cases where you need something major done.  You not only more or less sleep through the entire procedure, you don't remember anything afterwards.  I saw this work wonderfully when my younger son, Nathan, had his wisdom teeth extracted.  Nathan was given a combination of diazepam and triazolam prior to going in.  You might be wondering what these two drugs are, so allow me to explain that the difference is that diazepam has two azepams, while triazolam has three azolams.

Okay, I admit, I have no idea what those drugs are.  But they were amazing.  When Nathan came out of the dentist's office after the extractions, he was showing the level of agitation normally associated with lobotomy victims.  On the way home, he had to exert all of his effort to avoid drooling on the upholstery.  He went right to bed, woke up five hours later, and had no memory of any of it, then or since.

So I'd seen the whole thing work splendidly, but I still couldn't bring myself to go in.  My feeling was that I'd have needed some diazepam and triazolam just to be able to make the phone call and make an appointment without fainting or throwing up.  But last month, I realized I had to do something, because one of my teeth was kind of sensitive, and I was worried that if I didn't get it checked I was probably going to regret it.

So I called and made an appointment.  The only way I was able to do it was that I kept telling myself that (1) I could cancel it if I freaked out too badly, and (2) Dr. Webre wasn't going to be there, cackling and rubbing his hands together maniacally, when I got to the dentist's office.

I made it through the following month, barely.  The nightmares started about a week before the appointment.  I couldn't concentrate on anything but the thought of OH DEAR GOD I HAVE A DENTAL APPOINTMENT IN A WEEK.  Then it was the day before, and the day of, and a sort of gallows-hilarity descended upon me.  Yesterday, during my classes, I had this frenetic, hysterical energy.  "Ha ha!" my brain seemed to be saying.  "May as well laugh, given that you're going to die in five hours!"

I know that this may all seem ridiculous to my readers who aren't phobic about anything.  But I am not exaggerating when I say that anyone who has a phobia about something they have to deal with on a daily basis -- like going outside, or the dark, or insects -- must truly exist in perpetual agony.

Anyway, I drove to the dentist's office, was welcomed warmly by first the secretary and then the hygienist, and taken into the examining room.  And...

My sensitive tooth turned out to be a little bit of root exposure from receding gums.  The hygienist and the dentist both said that it was nothing to worry about, that it could be treated with a sensitive-teeth toothpaste and a fluoride rinse, and failing that, the spot could be sealed with a simple procedure that takes about 45 minutes and doesn't even require Novocaine.  Everything else about my mouth was fine, which shocked everyone given that the last time I'd been in the chair was fifteen years ago.

So they made me promise to come back in a year for a cleaning.  I said I would, and I think I was being honest.  As exposure therapy goes, this one may have been fairly successful.  I can only hope that next year, I won't go through the agonizing four weeks between phone call and appointment, picturing every possible worst-case scenario my limbic system can dredge up.  I think, actually, that I won't worry very much at all.