Elegy for an unpredictable universe

I was asked not too long ago how, as an atheist, I cope with tragedy.

"I don't see how you could possibly find a way to understand loss and grief," my friend said, "without some sense that there's a larger meaning in the universe."

In some ways, of course, I don't.  Not only do I not believe there's meaning in the universe (at least not in the sense he meant), I don't understand loss and grief at all.  I experience it, all too deeply -- I've lost both parents and a beloved grandmother, not to mention friends and colleagues.  It's impossible to live 53 years without going through the sorrow that comes with knowing that you will never, ever see someone you care about again.

But it is when the magnitude of the loss is amplified -- as it was yesterday with the announcement that Malaysia Flight 370 was almost certain to have crashed in the southern Indian Ocean, killing all 239 people on board -- that we struggle hardest to wrap our brains around what has happened.  How could the world be so built, we think, that something like this could occur?

It brings back one of the formative books of my teenage years, Thornton Wilder's The Bridge of San Luis Rey.  This book chronicles the search by the 17th century Franciscan monk Brother Juniper, who is shocked when a bridge in his Peruvian village collapses, killing six people.  He is a devout man, and is certain that god must have had a reason for bringing those six onto the bridge, and no others, in time to die when the cable holding the bridge aloft snapped.  So he traces the life history of each of the six, trying to see if he can discern a pattern -- to see if he can read god's mind, determine what it was that led those particular six people to die when hundreds of others crossed the bridge daily and survived.

In the end, of course, he fails; and he concludes that either god's mind is too subtle, too deep to parse, or else there is no pattern, and things simply happen because they happen.

It is a devastating conclusion.

Brother Juniper's search for meaning in apparent chaos is the genesis, I think, of religion, not to mention other worldviews perhaps less sanctified.  When you think about it, conspiracy theories come from the same place; a desperate need for there to be a reason, even a dark one, behind all of the bad stuff that happens in the world.  It seems that many of us would rather there be an explanation -- even if, in Christopher Moore's vivid turn of phrase, it involves "heinous fuckery most foul."  Better that than the universe being some kind of giant pinball game.

And in extremis, even we atheists still look for explanations, don't we?  Faced with tragedy, the first thing I've asked is, "Why me?", as if there is some answer to that question that is even possible given my philosophical worldview.  But it's a natural inclination, and seems to be universal to the human condition.  It is this aghast recognition that the world could treat us this badly that was captured in the starkly beautiful painting by Eugène Delacroix, depicting a Greek woman looking at the ruins of her home after her town was sacked by the Turks: 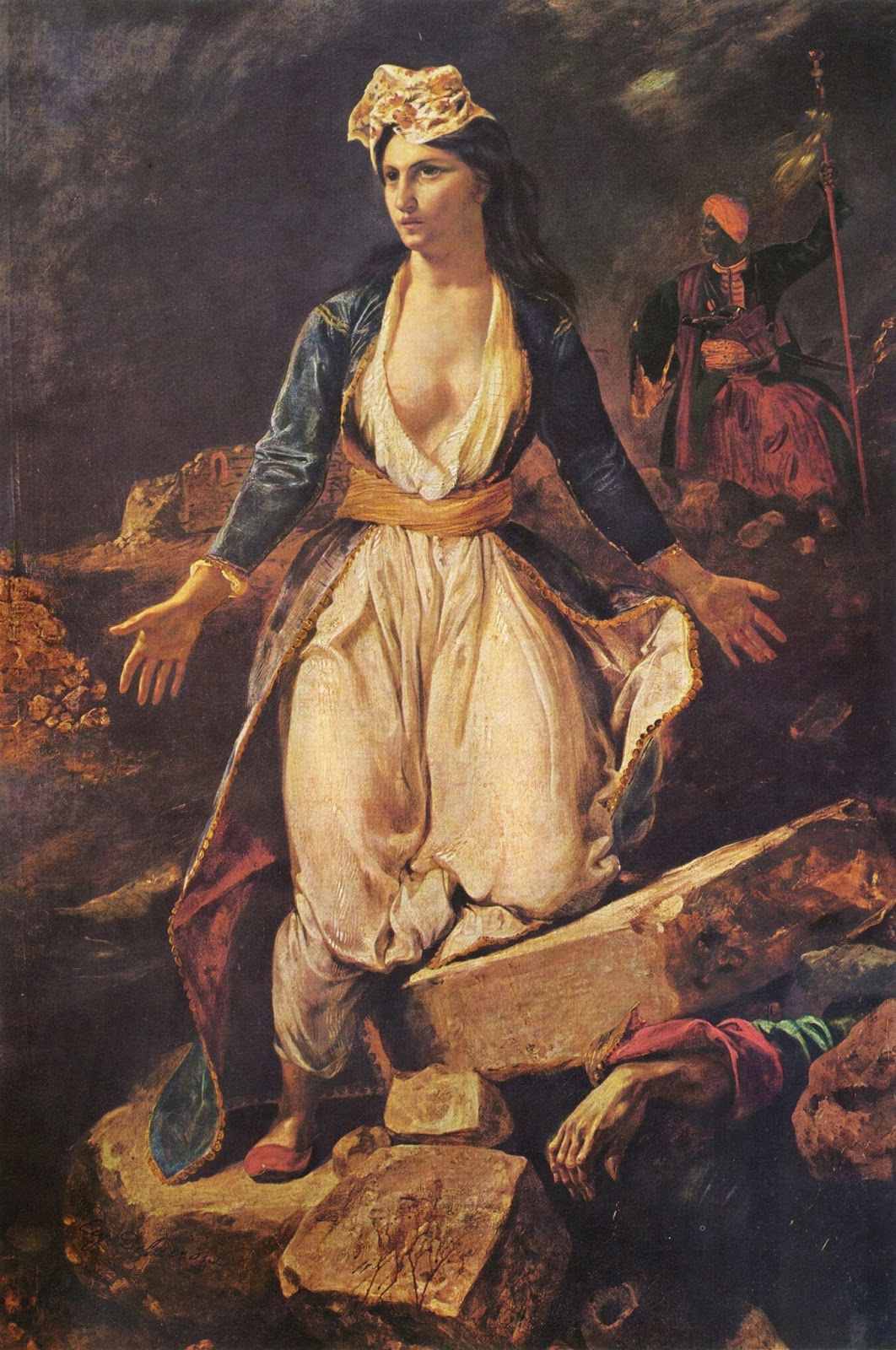 Greece on the Ruins of Missolonghi, 1826 [image courtesy of the Wikimedia Commons]

Sometimes there is no reason, no pattern; the world's machinery seems to work much of the time without any regard to us at all.  I flew Malaysia Airlines a year and a half ago, from Kuala Lumpur to Hong Kong, and arrived there safely; two weeks ago, a similar bunch of passengers, expecting (as I did) nothing more than a few hours of tedium, ended their lives in the turbulent waters of the Indian Ocean.  And if you think that the phrase "there but for the grace of god go I" hasn't gone through my head more than once in the last few days, you're sorely mistaken.

Of course, for an atheist, that phrase is only a metaphor, and perhaps not even a very good one.  I don't have the recourse of falling back on "they're with god now" or even "god has a plan."  All I'm left with is a sense that the universe is a strange, chaotic, and unpredictable place, full of beauty and goodness and love and pleasure, and pain and danger and fear and death, sometimes meted out in unequal parts and in ways that I will never really comprehend.  But I do know one thing: we need to be more conscious, right now, about the gratitude and compassion with which we treat the people around us.  None of us have any idea how many minutes we will be given; none of us have time to waste.  Hug your loved ones, your friends, your pets -- hell, hug total strangers if you want to.  There is nothing certain about tomorrow, so you damn well better make every second of today count.

As Thornton Wilder put it in the last line of The Bridge of San Luis Rey: "There is a land of the living and a land of the dead; and the bridge is love, the only survival, the only meaning."
Posted by Gordon Bonnet at 2:29 AM