There is a tendency amongst some folks that I just don't understand; and that is that if there is no ready explanation for things at hand, they feel obliged to make one up.

Maybe it's because I'm well aware of the extent of my own ignorance, and have no particular shame in saying "I don't know."  I try to make sure that the size of that territory gets smaller over time rather than larger; I am not, I hope, complacent, nor am I intellectually lazy.  If there's a topic about which I am ignorant, I am very willing to put in the hard work of learning.

Still, you can't be an expert about everything.  And one of the areas in which I am sadly lacking is geopolitics.  This is why when a student asked me, yesterday, why Vladimir Putin was so interested in the Crimea, I said, "I'm not sure."

I know that there are a good many ethnic Russians in the Crimea; there was a set of maps in an article on BBC News that showed the divide between areas of the Ukraine where the native language was Ukrainian, and where it was predominantly Russian.  Unsurprisingly, over 50% of people in the Crimea speak Russian as their first language.  Add to that the fact that the town of Sevastopol is a major naval center on the Black Sea, and it's not to be wondered at that Putin would like to find a reason to annex the region.

Still, the reasons for such military power plays are seldom simple, or few in number, and I was hesitant to say that these were Putin's only motives.  So I thought I'd do a little research, and see what else I could find.  And I found, in short order, some other claims -- that recently-ousted Ukrainian president Viktor Yanukovych was pro-Russian and anti-EU, and the previous president and presumptive current leader Yulia Tymoshenko, who was just released from prison, is pro-EU and anti-Russian.  That there are valuable oil and gas pipelines passing through that region that are vital to the Russian economy.  That Russia wanted to halt a trade agreement with the EU which had been proposed, and which was moving toward ratification.

And also, that Putin knows that a vastly powerful, energy-harvesting Jurassic-era pyramid is located in the Crimea, and he wants to control it. 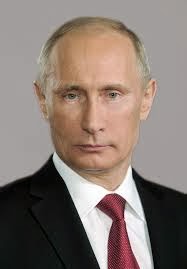 Yes, you read that right.  And if you did a double-take upon reading it, well, so did I.  I may have even done a triple-take.  Jurassic-era?  As in back when there were dinosaurs?  Like, 180 million years ago?

Yup.  According to an article in the Crimean News Agency, a Ukrainian scientist named Vitalii Goh discovered the pyramid back in August of 2012:


A Ukrainian scientist discovered the oldest pyramid in the world. Most interestingly, it was found in the most beautiful corner of the country, in Crimea.

As the ICTV channel reported, the finding was revealed by accident, when during his test alternative methods of finding water Ukrainian scientist Vitalii Goh discovered underground unknown object, which proved to be a giant pyramid of 45 meters in height and a length of about 72 meters. Goh said that the pyramid was built during the time of the dinosaurs.

“Crimean pyramid” has a truncated top, like a Mayan pyramid, but its appearance is more like an Egyptian. It is hollow inside, and a mummy of unknown creature is buried under the foundation.

“Under the foundation is a small body in the form of a mummy long 1.3-1.4 meters with a crown on his head.”

Well, there is a general trend I've noticed, and that is that if you say the word "pyramid," the wackos start coming out of the woodwork.  So instead of asking the relevant questions -- such as how the hell such a pyramid could have been built when there were no humans there to build it, and how, if the story had even a scrap of truth, it didn't rock the archeological world -- we have comments like the following:


Considering these pyramids were built by the fallen angels when they were imprisoned here on earth before man...I wouldn't be surprised!

They are also NOT fighting the wars in the Middle East over "oil"...put another way, the Tower of Babel was built in modern day Iraq at the location of the strongest stargate on earth. TPTB are fighting for control of this portal.

These pyramids might indicate key locations of energy and would explain a great deal in light of current circumstances!

Antidiluvian [sic] technology!  This is why Russia claimed the North Pole a few years ago!

The Crimean pyramid was undoubtedly built by dinosaurs then, using huge stones from faraway quarries, and then constructed using a complicated system of ramps and pulleys.

This last one almost made me spit a mouthful of coffee all over the screen, but I'm glad it did, because it meant that I didn't choke to death when I read the next one:


Gravity was much weaker back then.  Explains why beasts could roam the Earth that are far too large to survive today.  Also explains how the Pyramids were built.  Less gravity means lighter rocks making the job far easier.  One day gravity became stronger (for whatever reasons) and that caused the massive die off of all large beasts. Also explains why small mammals survived easily and coniferous plants become overrun by flowering plants.

That's it.  I think we can quit, now.  That is the single dumbest thing I have ever read.

It does, however, remind me of the character of Calvin's dad in the immortal comic strip Calvin & Hobbes by Bill Watterson.  Some of the most memorable exchanges between Calvin and his dad are when Calvin asks his dad a technical question, and gets an answer that is not much better than Jurassic gravity-warp dinosaurs building pyramids:


Calvin: Why does the sun set?
Dad: It's because hot air rises. The sun's hot in the middle of the day, so it rises high in the sky. In the evening then, it cools down and sets.
Calvin: Why does it go from east to west?
Dad: Solar wind.
Calvin: Why does the sky turn red as the sun sets?
Dad: That's all the oxygen in the atmosphere catching fire.
Calvin: Where does the sun go when it sets?
Dad: The sun sets in the west. In Arizona actually, near Flagstaff.
Calvin: Oh.
Dad: That's why the rocks there are so red.
Calvin: Don't the people get burned up?
Dad: No, the sun goes out as it sets. That's why it is dark at night.
Calvin: Doesn't the sun crush the whole state when it lands?
Dad: Ha ha, of course not. Hold a quarter up. See, the sun's just about the same size.
Calvin: I thought I read that the sun was really big.
Dad: You can't believe everything you read, I'm afraid.
Calvin: So how does the sun rise in the east if it lands in Arizona each night?
Dad: Well, time for bed.

This puts me more in the position, though, of being like Calvin's mother, doesn't it?  In one strip, Calvin asks his dad, "How do they figure out the load limit on bridges?" and his dad says, "They drive bigger and bigger trucks over the bridge until it breaks.  Then they weigh the last truck and rebuild the bridge."  And Calvin's mom, perturbed, shouts, "Dear, if you don't know the answer, just say so."

Which brings us full circle.  There are lots of geopolitical reasons, I'm sure, that Vladimir Putin wants to invade the Crimea.  Some of them are probably logical, and perhaps some of them reflect a measure of megalomania.  However, I am reasonably certain that none of them involve dinosaur-built energy-warping pyramids that were constructed when the gravitational pull of the Earth was lower.

And to the people who are circulating this claim, I have only one thing to say: dear, if you don't know the answer, just say so.