One of the questions you seldom hear asked, either of skeptics or of their counterparts, is, "What would it take to convince you that you were wrong?"

It was asked at the Bill Nye/Ken Ham debate, and it may have been the most telling moment of the whole thing; when Ken Ham said, "Nothing could ever convince me I was wrong," and Bill Nye said, "All it would take is one piece of hard evidence," it pointed out both the fruitlessness of debating people like Ham, and also the fundamental difference between a scientific viewpoint and a non-scientific one.  If you are a scientist, one piece of reliable evidence that your previously-held understanding is wrong would be sufficient to force a review of what you thought you knew.

I say "review" rather than "revision" because the one thing this leaves out is the quality of the evidence.  There are still the possibilities of measurement error, uncontrolled variables, and researcher bias to consider.  And factoring in these is no mean feat.  However, this is why peer review exists -- and why anecdotal reports, of the sort that are usually trotted out to support various woo-woo claims, don't sway me much.  If you want me to sit up and take notice, then go the traditional route of peer review.  Once you've done that, we can talk.

Of course, the problem is that a lot of woo-woos don't like peer review because they perceive the cards as stacked against them.  And this is when the whole issue takes on the added dimension of a systematic coverup.  In the first chapter of his wonderful book Voodoo Science, Robert Park tells the story of Joseph W. Newman, who claimed that he had circumvented both the First and Second Laws of Thermodynamics by inventing an "energy machine" that could solve the world's problems by outputting more energy than was put into it -- in effect, a Perpetual Motion Machine With Benefits.  Scientists rolled their eyes and walked away, prompting Newman to blame his failure to get a patent on a conspiracy against him.  And while no one who understood any physics did much more than scoff, he gained considerable traction amongst people who love to see the Underdog take on The Man.

It's probably much the same sentiment that led to a guy named Rhawn Joseph to announce last week that he's suing NASA, claiming that the recent "jelly doughnut rock" situation was evidence of life on Mars -- but that NASA, in the way of Evil Government Agencies, was covering the whole thing up.

You might have heard about the "jelly doughnut," which made the news a couple of weeks ago.  It's a light-colored rock that appeared suddenly in the field of view of the Mars rover Opportunity where no such rock had been in earlier photographs.  The whole thing was certainly a shock -- any time you're doing remote sensing of another planet, and something plays now-you-don't-see-it, now-you-do, it makes scientists sit up and take notice. 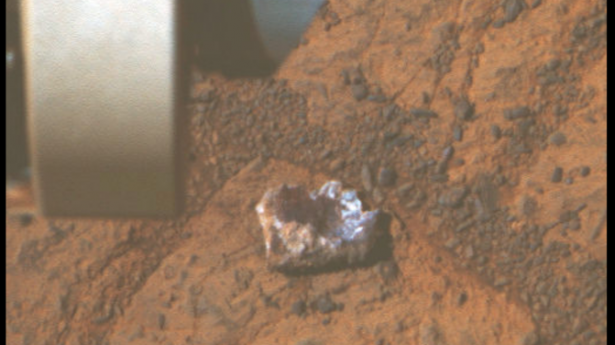 To me, the rock doesn't look that much like a jelly doughnut; and NASA scientists called it, with marginally better justification, "Pinnacle Island."  But whatever you call it, it was sort of a mystery.  "Much of the rock is bright-toned, nearly white," a NASA spokesperson said, in a press release.  "A portion is deep red in color.  Pinnacle Island may have been flipped upside-down when a wheel dislodged it, providing an unusual circumstance for examining the underside of a Martian rock."

Well, as soon as I saw this, I knew that the woo-woos were not going to be able to resist wooing all over this story.  And it wasn't long before claims that this was alien life started to appear on fringe sites like Above Top Secret.  But now, we have someone going a step further, with a lawsuit against NASA that demands that they come clean about the nature of the rock.  Rhawn Joseph, a self-styled cosmologist, is demanding that the agency "perform a public, scientific, and statutory duty which is to closely photograph and thoroughly scientifically examine and investigate a putative biological organism."

The problem, of course, is that it remains to be seen what NASA could do that would convince Joseph that this was just a rock.  Joseph himself seems to have somewhat dubious allegiances; he has written for the Journal of Cosmology, a journal that biologist and skeptic P. Z. Myers says "... isn't a real science journal at all, but is the... website of a small group... obsessed with the idea of Hoyle and Wickramasinghe that life originated in outer space and simply rained down on Earth."  As for Joseph himself, it's fairly significant that he was involved in a rather ugly shouting match with astronomer David Brin and JoC editor-in-chief Rudolf Schild over a paper Joseph had submitted for review to Brin which Brin said contained "glaring faults."

So Joseph is not, perhaps, someone with the highest credibility in the scientific world to begin with; but leaving that aside (as we must, because it's always important to separate the claim from the claimant), does he have a basis for suing NASA to force them to reveal what they're hiding?

In a word: no.  I mean, think about it.  What earthly (or Martian, to be more precise) reason would NASA scientists have to cover up evidence of life on Mars?  The first scientists to demonstrate the existence of extraterrestrial life will be instantaneously famous.  Especially, as in this case, if the living thing in question is large, multicellular, and capable of slithering quickly into the view of a remote camera.  Considering that NASA has been trying to figure out if there was life on Mars since the Viking probes of the 1970s, it's highly unlikely that they'd cover it up if some living creature just happened to photobomb Opportunity's surface photographs.

You have to wonder how the folks at NASA are responding to all of this.  Considering the bullshit they have to deal with on a daily basis -- whether or not Nibiru is heading toward Earth, what the current position of the Comet Elenin is, what our likelihood is of being struck by a huge asteroid -- I can only imagine that they just rolled their eyes and said, "Oh, hell, not another freakin' lawsuit."

And of course, even if the lawsuit is settled in NASA's favor -- which I can only hope it will be -- it's doubtful that it will silence Joseph and his supporters.  As I've commented before, once you've decided that everyone is lying to you, there is no piece of evidence that will be sufficient to convince you.

It is the salient point, really, and the acid test for whether you've left the realm of science.  If ever you are asked, "what would convince you that you are wrong?" and your answer is "nothing ever could," you are no longer doing science.  You are off in the rarefied air of woo-wooism -- and it might just be time for a u-turn.
Posted by Gordon Bonnet at 2:11 AM