No miracles for the Ivy League

I suppose that I'm an optimist at heart.

I always live in hope that people will see reason.  Regardless of what illogical and counterfactual thinking they've been guilty of in the past, I try to keep focused on the fact that they could, eventually, recognize that what they're saying is nonsense, and subscribe to a more reasoned approach.

It's what I'd hoped of Pat Robertson. 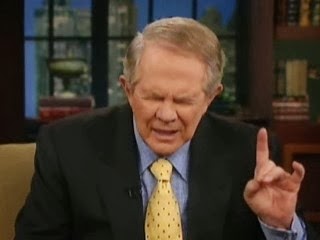 I know, I know.  Pat Robertson has proven, over and over, that he's a raving lunatic.  As I described in a previous post, he's the one who said that Katrina and the Haitian earthquake were the wrath of god, that martial arts were evil because they required you to "inhale demon spirits" prior to practice, and that good Christian children shouldn't participate in Halloween because the candy could have been cursed by witches.  I think I can say without fear of contradiction that these are not the pronouncements of a sane man.

But then, last month,  he said something... reasonable.  Like, really reasonable.  It was shortly after the Ken Ham/Bill Nye debate, and Pat said on his show, The 700 Club, that Ham had better give up trying to defend the young-Earth creationist stance:


Let’s face it.  There was a Bishop [Ussher] who added up the dates listed in Genesis and he came up with the world had been around for 6,000 years.  There ain’t no way that’s possible.  To say that it all came about in 6,000 years is just nonsense and I think it’s time we come off of that stuff and say this isn’t possible.

Let’s be real, let’s not make a joke of ourselves.

We’ve got to be realistic, and admit that the dating of Bishop Ussher just doesn’t comport with anything that is found in science, and you can’t just totally deny the geological formations that are out there.

The creationists, of course, were not going to take that lying down, especially given that Pat is one of their own and is still widely listened-to in the evangelical world.  Paul Taylor, who along with Eric Hovind is the host of Creation Today, took serious umbrage with Pat's pronouncements.  "Pat Robertson is claiming, then, that 6,000 years comes from Ussher’s book and not the Bible," Taylor said.  "The point is, where did Ussher get his figure of 6,000 years?...  Now, then, Pat Robertson, are you claiming the Bible is not [divinely] inspired when the Bible clearly tells us that the world is 6,000 years old?"

Which, I guess, was a fair enough criticism, given Taylor's assumptions about both the inerrancy of the bible and Pat Robertson's opinion thereof.  But as for me, I was heartened.  Maybe there's hope after all, I thought.  If someone like Pat Robertson could be convinced of the antiquity of the Earth, then there's hope for converting others to a more scientific view of the universe.

Optimism, sometimes, is a losing proposition.

I say this because of a story that popped up yesterday that described another proclamation Pat made on The 700 Club, this one just this past Monday.  A listener called in and asked Pat why the incidence of miracles was so much higher in "places like Africa" (the listener's words, not mine, allow me to point out) than it is here in the U.S.  Why don't we see miracles happening every day, like in biblical times, when it seemed like every other day there was a talking snake or a burning bush or a dude getting the crap smitten out of him for blasphemy or a dead guy coming back to life?  Why, the listener asked, don't we see stuff in the U.S. like prayer restoring sight in the blind and the ability to walk in the lame?


People overseas didn’t go to Ivy League schools.  We’re so sophisticated, we think we’ve got everything figured out.  We know about evolution, we know about Darwin, we know about all these things that says God isn’t real.

And that’s what God’s looking for.  That’s why they have miracles.

Well, even overlooking the blatant white-privilege attitude that would cause someone to label an entire freakin' continent with the word "simple," this strikes me as a completely baffling attitude.  Let's put you in god's shoes (size 12 loafers).  Now say you've got two people that you're considering doing a miracle for.  And you're not just considering doing your garden-variety miracle like hitting all of the stoplights green or finding two perfectly ripe avocados at the grocery store or hearing something that's true on the History Channel.  No, this is going to be something big, like regrowing a lost limb or having your dog start talking to you to tell you that you need to repent your evil ways and return Unto The Lord.

Now, both of the people you're thinking about granting a miracle to are unbelievers.  But one is a dirt-poor, uneducated farmer from Senegal.  The other is a highly influential, wealthy, Ivy League academic from Boston.

Logically, which one should you choose?

Well, if god is trying to reach the maximum number of people -- which, presumably, he is -- the obvious choice is the Bostonian academic.  No offense to our Senegalese farmer, but if he was suddenly converted via a divine message spoken by his dog, he might tell three or four people, maybe a couple of dozen, at most, and that would be it.  The Bostonian?  Especially if he could prove that something miraculous had happened, like hard evidence that he had regrown a lost finger, or something?

You're talking a reach of millions.

So either (1) god doesn't see things that way, and doesn't understand the concept of "biggest bang for the buck," or (2) I was wrong about Pat Robertson, and he actually is crazy as a bedbug.

Sadly, I'm putting my money on the latter.
Posted by Gordon Bonnet at 2:03 AM