Well, folks, I'm pleased to inform you that this is a milestone: my 1,000th post on Skeptophilia.

When I first started this blog, in October 2010, I had no idea what it would become.  It was a former student who suggested I create a blog (thanks, Brad!), and the first few weeks' worth of posts got little attention.  No surprise, really; it takes a while for anything like this to gain traction.

Then I passed 500, then 5,000, then 50,000, then 500,000 hits; and now, three and a half years later, I am within shouting distance of a million lifetime hits.  So I'd just like to start out with a huge thank you to all of my faithful readers for all of your suggestions, comments, reposts, and (even) criticisms.

Here's to the next thousand posts and the next million hits.

I thought I'd have a little fun with the thousandth Skeptophilia post, just 'cuz I can, right?  So sit back, friends, while I tell you my favorite ghost story.

Despite my general reluctance to believe in ghosts -- the evidence still seems to me regrettably slim -- I love a good scary story, and have been an aficionado of books with names like Twenty True Tales of Terror since childhood.  One of the scariest ones I've ever run into can be found in its entirety in John Canning's wonderful collection 50 Great Ghost Stories, which (according to the message written into the front cover that says "October 29, 1977... Mon Cher Ami... mieux vaut tard que jamais!... Amelia") I received from a family friend as a gift three days after my 17th birthday.

I read the whole thing voraciously, as I was wont to do with such books.  But none of the stories has stuck with me like the 19th century English tale of Nurse Black.

The story comes from the (real) English theater figures of Charles Kean and his wife, Ellen, but the central characters are Ellen's sister, Ann, and her publisher husband, John Kemble Chapman.  John and Ann and their eleven children lived in London in the 1850s, but London of the time was a polluted, disgusting-smelling, crime-ridden place, so they decided to find a country home that was a healthier place to raise children.

They settled on a home in Cheshunt, Hertfordshire.  It was spacious and picturesque, and at the time already about 200 years old.  But it seemed ideal, and in due time the home was purchased, and the family moved in.

And for a while, nothing untoward happened.

It was only when the Chapmans were expecting guests that the first events occurred that were eventually to impel them to sell their house.  For wealthy individuals, John and Ann were unusual in their time in that they employed few servants.  Ann was a practical, strong-minded individual, and preferred to see to the household chores herself.  So one day, she was making up the bed in the "Oak Bedroom," a room that had been left unoccupied for guests, when she realized that she was not alone.

Standing near the window was a young woman in antiquated dress, wearing a white shawl over a silk petticoat.  The woman was looking out of the window with an eager expression, as if she were expecting someone, and did not seem to be paying any attention to Ann.  But Ann herself was seized with a sudden panic; she knew, she said afterwards, that it was not some stranger who had wandered into the house unnoticed.  "I felt," she told her brother-in-law Charles Kean, "as if I was seeing something I ought not to have seen."  So she put her hands over her eyes for a moment.

When she removed them, the figure was gone.

Ann chalked the apparition up to fatigue and nerves, and was able to convince herself for a time that she'd been a victim of her own imagination.

Then a few days later, a young woman who had been hired to look after the youngest of the Chapman children came running upstairs in hysterics, saying that she had been taking the trash out through a back room, and had seen a face staring at her through a window.  The face, she said, was of an old woman, "hideously ugly" and with "an expression of awful malignance," wearing a nightcap.

With some difficulty, Ann was able to calm down the nursery maid, convincing her that it had been a trick of the light -- until three days later, when Maria Chapman, one of Ann's older daughters, told her that she had been scared during the night when she had awakened to find a "very ugly lady wearing a cap" who was peering around the edge of her bedroom door at her.

During this entire time, John Chapman had been away on business in London, and it's to be imagined that Ann was looking forward to his return.  But before he got back, she did something that I have to say I find impressive -- with the help of their few servants, she went over the entire house from stem to stern.  Every closet, cabinet, cupboard, and corner was investigated, to see if there was any evidence of someone hiding in the house without the owners' knowledge.  They found nothing -- but as Ann was going down the staircase away from the Oak Bedroom, she heard footsteps following her.

She turned around.  The staircase was empty.

John came home a few days later, and by this time Ann was so thoroughly unnerved that she told her husband everything.  Knowing her to be steady, reliable, and intelligent, John believed what she said, and instituted a second (fruitless) search of the house.  And he was to get his own evidence shortly thereafter, as events accelerated.  Footsteps began to follow him everywhere he went -- "soft, steady, infinitely menacing."  He took to carrying a loaded pistol with him.  Then most of their servants quit when during their meal, a door opened and closed -- to admit no one. 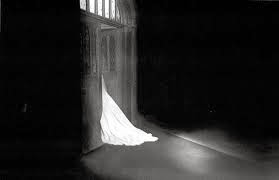 One of the only remaining servants, a Mrs. Tewin, promised to sleep in the same room with Ann Chapman the next time John had to be away.  And this was to precipitate one final incident, that induced the Chapmans to leave.

In the middle of the night, Ann Chapman awoke to hear Mrs. Tewin moaning, "Wake me.  Wake me."  Ann ran to her bedside, and shook the servant awake.  Upon coming to full consciousness, Mrs. Tewin said she'd been dreaming, and had been aware it was a dream -- but had been unable to wake up.

In the dream, Mrs. Tewin said, she was in the Oak Bedroom.  Standing near the window was a young woman in an old-fashioned white robe, with long, disheveled dark hair.  Across the room, near the fireplace, was an ugly old woman "with an evil expression," wearing a gray nightcap over scanty, wispy hair, seated in a rocking chair.

"Oh, I did not kill it," the girl replied.  "He was preserved, and grew up and joined a regiment and went to India."

At this point, the young woman noticed Mrs. Tewin, seemingly for the first time, and said to her, "I have never spoken to a mortal before.  But I will tell you everything.  My name is Miss Black.  This old woman is Nurse Black.  Black is not her family name, but we call her that because she has been so long in the family..."

But here, the old woman stood, and went to Mrs. Tewin and put her hand on the servant's shoulder.  The pain was excruciating, but she could not wake up.  This is when she began crying out, and called for Ann Chapman to wake her.

The next morning, Ann went into the village of Cheshunt to make inquiries, and was able to find out from an old inhabitant that many years earlier, the home had been inhabited by a Mrs. Ravenhall, who had had a niece named Emily Black.  But nothing else was recalled about them.

The Chapmans were becoming increasingly desperate to find out what was going on, and Ann (who was either incredibly courageous or else completely crazy) decided to spend a night in the Oak Bedroom, which seemed to be the epicenter of the haunting.  And late at night, she woke to see once again the figure of the young woman, this time wringing her hands and looking down at a particular spot on the floor.  The next day, she even went to the length of calling in a carpenter to pry up the floorboards at that particular spot.

Underneath was a hollowed-out space -- but it was empty.

At this point, the Chapmans had had enough, and put the house up for sale.  What happened afterwards -- who bought it, and if they had similarly uncanny experiences -- was not recorded in the story.

I think what appeals to me about this story is the open-endedness of it.  All of us have heard scary stories of the urban legend variety; the driver who picked up a beautiful hitchhiker late at night, loaned her his jacket, and afterwards finds out that she matches the description of a dead girl from the nearby village, and he finds his missing jacket folded up on her grave.  Those have always struck me as too neat, too pat, to be believable (even when I was in my much more gullible youth).  But this one has no easy tie-up, and is full of loose ends -- the Chapmans never did figure out who the ghosts were, what their story was, why they haunted the place.  Even the hollow space under the floorboards, which could have provided an easy way to give a punch line, was empty.

Now, it's not that I actually believe it, mind you.  Charles Kean, who enjoyed many a glass of brandy while scaring the absolute hell out of his friends with the tale, was a thespian, and presumably knew how to spin a good yarn, so I've no real doubt that he made it up.  But the twisty, unresolved messiness of the story has the ring of truth, I have to admit, and for me that makes it a hundred times scarier.

Man, it should be true.

So there you have it.  One of my favorite ghost stories, in celebration of my thousandth post.  To my readers: another heartfelt thank you.  Keep reading, keep thinking, keep investigating, keep questioning.  And if tonight you hear footsteps behind you on the stairs, just say, "Emily Black, is that you?"

Maybe you'll get an answer.
Posted by Gordon Bonnet at 4:53 AM