You'd think, after four years of writing Skeptophilia, that I'd be inured to wacko claims.

If anything, though, my incredulity has only increased over time.  "Are you kidding me right now?" I frequently say to my computer screen, while doing research.  But of course, talking to a computer doesn't earn me much in the way of Sanity Points myself, so perhaps I should just proceed on to the latest assaults on my suspension of disbelief that I've come across in the last few days.

First, from the "You Do Realize That That Was A Movie, Right?" department we have some people in the Chicago Police Department who want to create a Pre-Crime Division, à la Minority Report.

The people behind this are using an "analytical tool" developed at Yale to generate a list of four hundred or so people in the Chicago area that are identified as "most likely to be involved in violent crime" in the future.  "These are persons who the model has determined are those most likely to be involved in a shooting or homicide, with probabilities that are hundreds of times that of an ordinary citizen," a press release stated.  Commander Steven Caluris of the CPD added, "If you end up on that list, there's a reason you're there."

What strikes me about all of this, besides the fact that there has to be a constitutional law issue here somewhere, is how easily such a system could fuck up royally.  Speaking of movies we don't want to emulate, how about Brazil -- where a clerical error landed poor Archibald Buttle in the hands of Michael Palin as the psycho torture chamber supervisor.  I can only hope that wiser heads will prevail, even though historically, once someone lands on a "great idea for revolutionizing the field," it takes a complete crash and burn and usually several years of finger-pointing and blame-placing before things change.


Our second story is from Florida, where we have a woman who is billing herself as the world's only "psychic nanny."

Denise Lescano, of Naples, Florida, says that it's her mission in life to help families deal with children who can speak to dead people.

"This is not a scary thing, this is a very healing and comforting thing.  Many of the families that come to me, they really don't even believe in me, they are skeptical.  When I am able to help them and really pinpoint what is going on, it is incredibly validating and relieving for the family."

My reaction is that once again, we seem to have people who are confusing a movie with reality, in this case The Sixth Sense.  Yes, I know that children often make oddball claims, and that some of them can be downright spooky.  My younger son, when he was age six, scared the absolute shit out of me one time when he had a night terror.  I heard him scream, and leaped out of bed and flew down the hall -- it was about eleven at night, and at the time I was a single dad -- to find him sitting bolt upright in bed, eyes wide open, trembling.  I ran to him, and said, "Nathan, what's wrong?"

He pointed toward an empty corner of his room, and said, in this strange, deadpan voice, "It's staring at me."

As is typical with night terrors, he calmed down and went back to sleep after about ten minutes or so, and the next morning remembered nothing.  I, on the other hand, needed months of therapy to recover from the experience.

So, yeah, kids say bizarre things sometimes.  But I flatly refuse to believe that there was a monster (invisible to everyone but him) staring at my son from the corner of the bedroom; and the anecdotal reports of Kids Who See Ghosts that Ms. Lescano describes don't really do much for me, either.

Neither am I all that impressed by a claim out of Swaziland that a man was attacked and bitten by a Ghost Cow.  Amused, yes.  Impressed, no.

The whole thing apparently started when one Sikhumbuzo Ndwandwe, of the town of Vimbi, fell afoul of "one of the area's feared traditional healers," Lizwe Dlamini.  Dlamini evidently had lost several of her cows to a nighttime marauder who had hacked them to death with a machete.  Dlamini thought that Ndwandwe was responsible, and she took steps to have her revenge on him.

Ndwandwe was asleep, he said, when he felt something bite him.  He woke up to find that there was a "black ghost heifer who was feasting on his flesh," a phrase that makes me simultaneously want to guffaw and gag.  Alarmed (who wouldn't be?), he ran to Dlamini, begging her to call off the carnivorous bovine spirit, but she "wouldn't hear any of it." 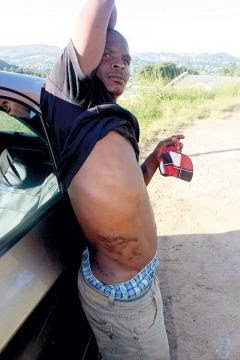 Dlamini, when questioned by the police, expressed "surprise" that her ghost cow had bitten Ndwandwe, but then said that the law enforcement officials had better leave her alone, or she'd sic the cow on them, too.  Which kind of makes you wonder how surprised she actually was.  "I asked about the suspect, they pointed fingers at someone else hence my decision to handle it my way," she said, adding, "This applies also to the police officers who are tormenting me."
Don't even make me call out my Invisible Vampire Goats, she seems to be saying.  Although I will if I have to.
I don't, for the record, have a movie to compare this last story to.  I have never seen a movie about flesh-eating ghost cows, although if there ever is one made, I'll definitely go see it.

So, there you are, our crazy news items for today.  I have to say, I am a little in awe of people's ability to keep coming up with bizarre claims I'd never heard of before.  Maybe at some point I'll run out of material for this blog, but so far, it seems like keeping up with the constant flood of wingnuttery without losing my marbles myself is more the problem.
Posted by Gordon Bonnet at 2:18 AM