Saying no to Noah

There are times when I want to tell people, "Stop.  You are making it way too easy for me."

I would almost like it better if the loonies had stronger arguments, you know?  Make me work for my posts.  Stop me in my tracks with some actual logic or evidence.

Sadly, that rarely happens.  I won't say "never;" I have more than once posted retractions or corrections.  And I live in hopes that the wingnuts will eventually start adopting the scientific method as their modus operandi.

But I don't see it happening any time soon.  Instead, we still have daily examples of what my father used to call "shooting fish in a barrel."

The latest example of fish-shooting has to do with the reactions to the soon-to-be-released Darren Aronofsky biblical epic Noah, starring Russell Crowe and Emma Watson.  (Watch a trailer here.)  The movie is due in theaters on March 26. 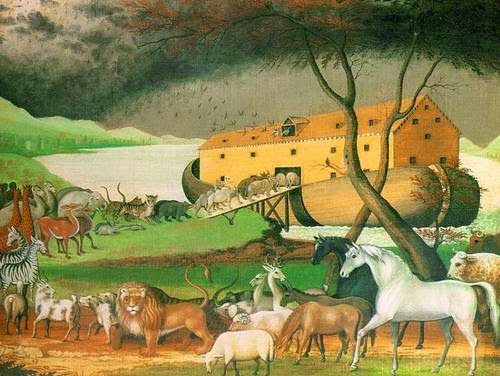 You would think that the staunch Christians would be tickled pink that Hollywood is putting a biblical story on the Big Screen -- they certainly loved the gruesome Passion of the Christ, not to mention classics like The Greatest Story Ever Told and The Ten Commandments.

But no.  The site Christian News published an article called "New 'Noah' Film Starring Russell Crowe Flooded With Controversy," which described the reactions of Christians who have been allowed to pre-screen the movie.  "Earlier reports of the film expressed disapproval that Noah was depicted as being centered on an environmental agenda, and that Aronofsky viewed Noah as the 'first environmentalist,'" author Heather Clark writes, implying that Christianity and environmentalism are somehow antithetical.  "Noah is also stated to be tormented with guilt for surviving the flood while others perished."

Well, yeah.  I'd guess he would be.  But it only gets weirder from there.  Angie Meyer-Olszewski, an entertainment publicist, was interviewed by Fox411 and said, "You can’t stray from the Bible in a Bible-based film without upsetting a percentage of the Christian faith base.  Interpretations may vary, but if the story changes, even a little, it’s deemed offensive.  When a studio releases a movie that’s biblical, they are playing a game of religious roulette."

But no one had a stranger, or more bizarrely ironic, reaction than our old pal Ken Ham of Answers in Genesis.  In an interview with Newsmax, Ham said, "In the movie, it seems Noah is a far cry from the Noah of the Bible.  He's angry, even crazy.  It makes a mockery of Noah's righteous nature and is actually anti-biblical...  Noah was a preacher of righteousness, (but) this just isn't the case in Hollywood's version.  He's a delusional, conflicted man, more concerned about the environment, animals, and even killing his own grandchild than he is with his family and his relationship with God."

Ham then went on to say, in a quote that I swear I'm not making up, "Sure, after watching the film, people could be directed to read the true story for themselves in the Bible.  But in this day and age, young people have a hard time deciphering reality from fiction and don't often take the time to form their own educated opinions."

The last quote prompted atheist blogger Hemant Mehta to say, "He didn't really just say that... did he?"

Then noted evangelical wackmobile Ray Comfort weighed in, because things weren't surreal enough.  "I wouldn't encourage a soul to pay Hollywood to make any movie that undermines the credibility of the Bible, and this one certainly does," Comfort said.  "Do it right -- according to the script in the Scriptures -- and we will support it in the millions, as we did with Ben-Hur."

Ah, yes.  I do remember the famous chariot race scene from the Gospel of Luke, don't you?

And if this weren't enough, we now have word that the movie is being banned in Muslim countries, thus far Qatar, Bahrain, and the United Arab Emirates, with Jordan, Kuwait, and Egypt expected to follow suit.   The reason -- it is an insult to depict any of Allah's prophets (of which Noah is considered one), and the movie "contradicts the stature of prophets and messengers... and antagonizes the faithful."

Well then.  This just shows, once again, the truth of the South African proverb, that there are forty different kinds of lunacy, but only one kind of common sense.  I mean, really; do they expect that a movie is going to follow the "script in the Scriptures" to the letter?  If it did, it would be, what, fifteen minutes long?  And have no character development or, frankly, plot.  But there you have it; I guess you can't please everyone.  And it's not like it's the only biblical epic you have to choose from, if that sort of thing floats your, um, ark.  The Jesus's-life movie Son of God is already in the theaters, and seems to be generating better responses from the faithful, for what it's worth.

As far as director Aronofsky's feelings about the controversy surrounding Noah, the media depicts him as upset by it, but I honestly doubt he is.  The kerfuffle over the movie's biblical accuracy, and whether it should be viewed by the devout, is keeping it in the media -- which is exactly where Aronofsky wants it to be.  I predict it'll be a roaring success, at least for the first few weeks.  Irish poet Brendan Behan said it best: "There is no such thing as bad publicity."
Posted by Gordon Bonnet at 4:29 AM