There are times -- and I say this with all due affection toward my fellow human beings -- that I wish people would just get a freakin' grip on reality.

I mean, yesterday's post was bad enough.  We had several individuals, including (scarily enough) some higher-ups on the Chicago police force, who evidently forgot to read the "All resemblance to any real persons, living or dead, is purely coincidental" disclaimer on movies like Minority Report and The Sixth Sense.

But at least the people in yesterday's post can, apparently, tell the difference between a real live human and a cartoon character, which is more than I can say for the folks I ran across last night.

As surprising as it may sound to those of us whose skulls aren't filled with cobwebs and dead insects, this sort of thing isn't unprecedented.  This is far from the first time that we have had someone who has thought that cartoon characters actually existed.  Back in 2008 there was a Muslim imam who issued a fatwa against Mickey Mouse, saying, "The mouse is one of Satan's soldiers and is steered by him... Mickey Mouse has become an awesome character, even though according to Islamic law, Mickey Mouse should be killed in all cases."  Not to be outdone, there was a serious discussion in academic circles two years later over the question of whether Dora the Explorer was an illegal immigrant.  Since I started Skeptophilia late in 2010 I've actually written about two additional cases -- one of my first posts ever was about an inquiry done by the Vatican that concluded that the Simpsons were Catholic, and the following year I wrote about a serious academic study done in France that proved that the Smurfs are communists.

How, you might ask, could it get any more ludicrous?  Oh, it can, friends and neighbors.  It can.

Because now we find out the Dr. Seuss's iconic character "The Cat in the Hat" is actually a symbol for the Illuminati takeover of the civilized world. 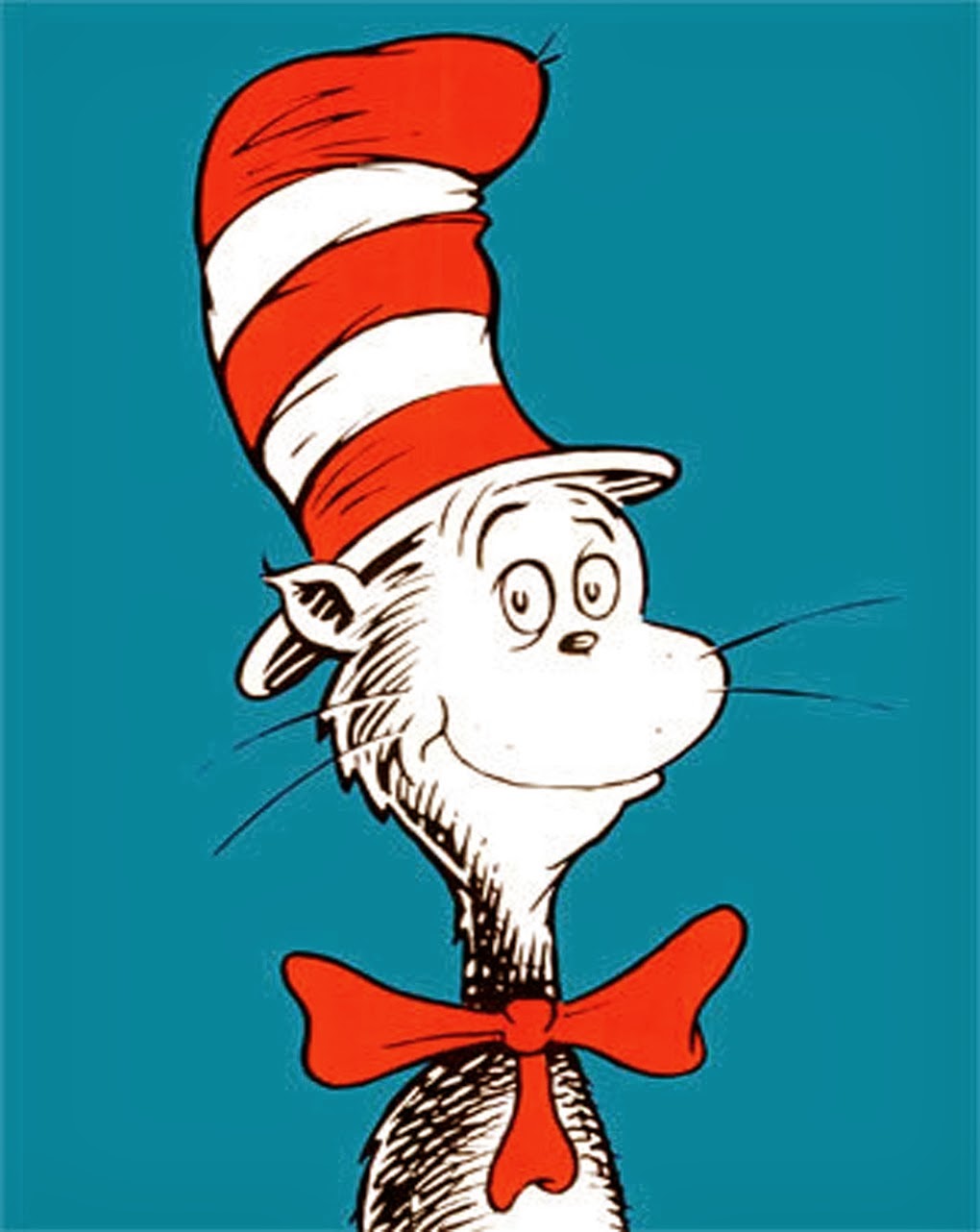 I'd like to be able to say that this is all a joke, that we're looking at yet another example of Poe's Law.  But no, these people seem to be entirely serious.  Here's a representative passage:


About the “Cat in the Hat” which incorporates symbolic content of the mind control programs. See Cat in the Hat movie book showing symbolism, such as the RED and WHITE Lighthouse Signal Stovepipe Hat with the GRAMOPHONE HORN inside aka Victor Listening to his MASTERS Voice, FEEline Basement, and holding a “HOE”. Dr. Seuss worked for Army Propaganda and had ties to Standard Oil. It opens to find a public lethargic, unimaginative and un-moving, without eyes to see and ears to hear, to an apparent hidden ideology, Cold War Communism. The moving force, The People of the Pagan Cat (The Cult of Freya), enters the cosmic domain of the American public UNINVITED (Operation PAPERCLIP).”

Yes!  I see it all, now!  And the Fish was Senator Joseph McCarthy, warning the American public of the danger, but would anyone listen?  Nooooooo!

At the end of the story, we're told, the Cat makes everything okay... at least, it seems that way:


The Cat restores order to the mess of CHAOS with Magic and a Luciferian illusion. Finally, Freya Rides and Wotan Reigns again, the cosmos is restored to its natural order and beauty (archaic paganism), and the fish is left with the dilemma of the Cat People’s ILLUMINATED mysticism, magic; and the mysterious SECRET ORDER over CHAOS; and Christianity.”

And that's not all of the bad stuff that Dr. Seuss was up to.  I bet you never even knew that the famous Horton Hears a Who is actually about the New World Order.  First, there's the fact that the name "Horton" comes from "Horus" + "Aton."  And yes, I'm referring to the Egyptian gods, which are clearly relevant here.  But that's not all:


Here is some of what was revealed about what is currently happening on planet earth.

1. The whos live on a speck (earth).  The mayor of whoville communicated with Horton (god in the sky) who warns him that his speck is not safe.

2. No one will listen to the mayor who is trying warn everyone of the message. He points our that weather changes which are happening are precusors [sic] to the end of the world.

3. He declares that "martial law" should be imposed (this is a kids [sic] movie) and everyone who wants to survive should go underground to the safety bunkers.

4. A black vulture named "vlad" steals the speck from horton and drops it causing the first catastrophe. (planet x passing)

5. All the whos join together and form a wormhole, break the bounds of thier [sic] universe and are heard by horton (god) and are thereby spared and sent to the new world.

And don't even get me started about The Lorax.

You know, the world has got to be a seriously scary place when you see evil symbolism and portents of doom everywhere, even in children's cartoons.  It actually makes me feel kind of sorry for people who believe this stuff.  Now, to be fair, I'm willing to believe that sometimes I might be overly trusting of people -- I tend, usually, to think that most people are acting out of benevolent (or at least morally neutral) motives, most of the time.  And I will admit that there are cases when I'm probably wrong.

But fer cryin' in the sink, I would prefer to think the best of my fellow humans, and occasionally get kicked in the ass, than I would to go around thinking that every cloud in the sky has been seeded with poison by the Evil Government Overlords.  You have to wonder, if that's the way these folks see the world and the human race, why they think it's so important to blow the whistle.  Nihilism would be, on the whole, more pleasant.

Or maybe they're just batshit crazy.  I dunno.
Posted by Gordon Bonnet at 2:21 AM