The disappearance of Flight 370

Well, I'm happy to say that The Weekly World News has been supplanted as the world's first and foremost disseminator of bullshit.  The crown has now officially been passed to Natural News.

It's not that the competition wasn't stiff.  The Weekly World News has had some doozies.  (My all-time favorite TWWN headline: "Santa's Elves Actually Slaves From The Planet Mars.")  But Natural News has edged them out, on two bases: (1) they have better writers, so their stories actually sound plausible and therefore sucker more people, and (2) they have mastered the art of distributing bonkers "news" stories via social media.

At first, it was just health stuff (and their site is still sub-headed, "Natural Health News and Scientific Discoveries").  And as such, they confined themselves for some time to articles telling you about how Big Pharma is trying to kill us all, how you can cure cancer with lemon juice, how putting onions in your socks draws out toxins, and how you won't get heart disease, diabetes, cancer, or old age if you eat Indian gooseberries.  (You thought I was going to say I made those up, didn't you?  Well, ha.  Those are real article topics from Natural News.  Teach you to make assumptions.)

But now, they've branched out.  And because of this, we have a monumentally screwy piece of journalism, to wit: Malaysia Airlines Flight 370 disappeared because it... disappeared. 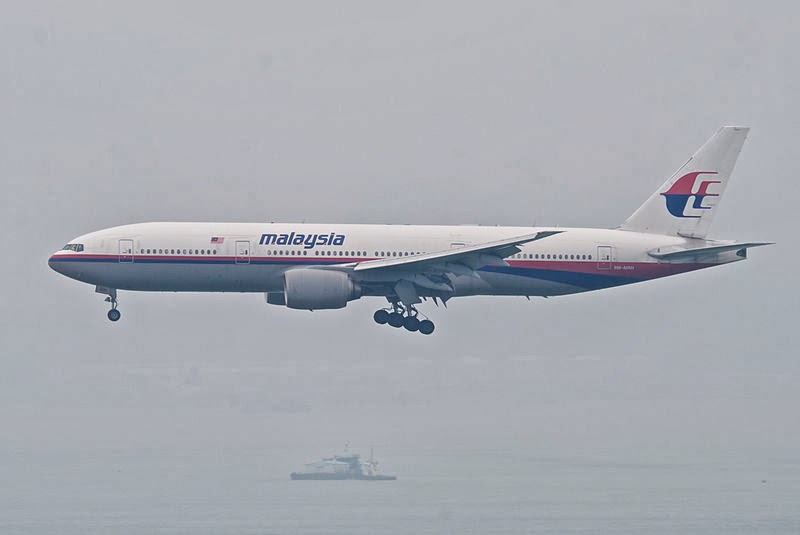 [image courtesy of photographer Aero Icarus and the Wikimedia Commons]

Yup.  Disappeared.  "Poof."  Or "zap," or whatever noise you prefer your teleportation device to make.  And admit it: it's not really that surprising.  Given that we're talking about the loss of a huge passenger jet, it was only a matter of time until the conspiracy theories started flying around.

Author Mike Adams does it right, I have to give him that.  First, it's hammered into our brains how MYSTERIOUS and BAFFLING it is that the plane vanished (words to that effect appear dozens of times), and then we're offered a possible explanation:


This is what is currently giving rise to all sorts of bizarre-sounding theories across the 'net, including discussions of possible secret military weapons tests, Bermuda Triangle-like ripples in the fabric of spacetime, and even conjecture that non-terrestrial (alien) technology may have teleported the plane away.

But no, Adams says, that would be ridiculous.  We couldn't believe that without evidence.  Instead, he asks us to believe the following:


The frightening part about all this is not that we will find the debris of Flight 370; but rather that we won't. If we never find the debris, it means some entirely new, mysterious and powerful force is at work on our planet which can pluck airplanes out of the sky without leaving behind even a shred of evidence.

If there does exist a weapon with such capabilities, whoever control it already has the ability to dominate all of Earth's nations with a fearsome military weapon of unimaginable power. That thought is a lot more scary than the idea of an aircraft suffering a fatal mechanical failure.

Righty-o.  Because planes have never disappeared before, or anything.  It's not as if there's a list of 122 airplane disappearances that have never been resolved, right there on Wikipedia -- 36 of them since 1966, when black boxes were required on commercial aircraft.  It's not as if there is precedent for it taking a long while to locate wreckage -- such as the remains of Air France Flight 447 in 2009, which took three years to recover.  (The black box was finally found under 13,000 feet of water in the South Atlantic.)

Marginally more plausible theories have been trotted out, mostly centering on some kind of Chinese-led terrorist attack designed to get rid of one or more people who were on the plane.  To that, I can only respond: why the hell would the Chinese blow up an entire airplane to get rid of a few people?  The plane was headed to Beijing, fer cryin' in the sink.  Couldn't they have just arrested them when they got there?  It's not like the Chinese are shy about doing that sort of thing, after all.

So, then, you might ask: what do I think happened to the plane?

Why Does Mike Adams not offer any speculation about The Kuala Lumpur War Crimes Tribunal hearing charging Israel with genocide? Also the Former Malaysian Prime Minister until 2003 who once stated 9/11 was a false flag and it's Jews that run the world. The plane being fitted with the Boeing uninterruptable autopilot system?

The possibility exists that this plane instead of moving towards the ground has moved away from the ground. In other words it has moved into outer space. It is beyond Earth orbit because it would have been detected in orbit by some instrument. This would explain why the black box signal is not detected.

Have you seen LOST!!! What if this is just like LOST! The radiation from Fukishima [sic] is probably changing the sky now too.

Mike is blessed with a unique ability to analyze, rationalize and discern evil. For those who want Mike to ignore politics, remember that millions more innocent people have been murdered by governments than from toxins in their food.

So, the reason that they haven't found the wreckage yet couldn't be the fact that the Gulf of Thailand, where the plane disappeared, is fucking huge?

Nope.  Has to be a "new, mysterious force that plucks airplanes out of the sky."

Look.  I'll grant you this:  I don't know what happened, either.  (Cf. what I wrote several paragraphs ago, and then asked you to say along with me.)  The difference is, I don't pretend that I do, and I don't have any interest in getting people all freaked out over idle speculation that will almost certainly turn out to be false.  But I'll go this far -- if it does turn out to be a "new, mysterious force," or aliens, or time warps, or the fact that the Bermuda Triangle decided to go on vacation in Southeast Asia, I'll happily publish a retraction.

It'd be nice to receive the same from Mike Adams if, on the other hand, I turn out to be right -- but I'm not expecting it.
Posted by Gordon Bonnet at 1:28 AM