Those may sound like contradictions, but they really aren't.  Science is a method that allows us to evaluate hard data -- measurements by devices that are designed to have no particular biases.  By relying on measurements from machines, we are bypassing our faulty sensory equipment, which can lead us astray in all sorts of ways.  In Neil deGrasse Tyson's words, "[Our brains] are poor data-taking devices... that's why we have machines that don't care what side of the bed they woke up on that morning, that don't care what they said to their spouse that day, that don't care whether they had their morning caffeine.  They'll get the data right regardless."

But we still believe that we're seeing what's real, don't we?  "I saw it with my own eyes" is still considered the sine qua non for establishing what reality is.  Eyewitness testimony is still the strongest evidence in courts of law.  Because how could it be otherwise?  Maybe we miss minor things, but how could we get it so far wrong?

A scientist in Italy just knocked another gaping hole in our confidence that our brain can correctly interpret the sensory information it's given -- this time with an actual hammer.

Some of you may have heard of the "rubber hand illusion" that was created in an experiment back in 1998 by Matthew Botvinick and Jonathan Cohen.  In this experiment, the two scientists placed a rubber hand in view of a person whose actual hand is shielded from view by a curtain.  The rubber hand is stroked with a feather at the same time as the person's real (but out-of-sight) hand receives a similar stroke -- and within minutes, the person becomes strangely convinced that the rubber hand is his hand.

The Italian experiment, which was just written up this week in Discover Online, substitutes an auditory stimulus for the visual one -- with an even more startling result.

Irene Senna, professor of psychology at Milono-Bicocca University in Milan, rigged up a similar scenario to Botvinick and Cohen's.  A subject sits with one hand through a screen.  On the back of the subject's hand is a small piece of foil which connects an electrical lead to a computer.  The subject sees a hammer swinging toward her hand -- but the hammer stops just short of smashing her hand, and only touches the foil gently (but, of course, she can't see this).  The touch of the hammer sends a signal to the computer -- which then produces a hammer-on-marble chink sound.

And within minutes, the subject feels like her hand has turned to stone. 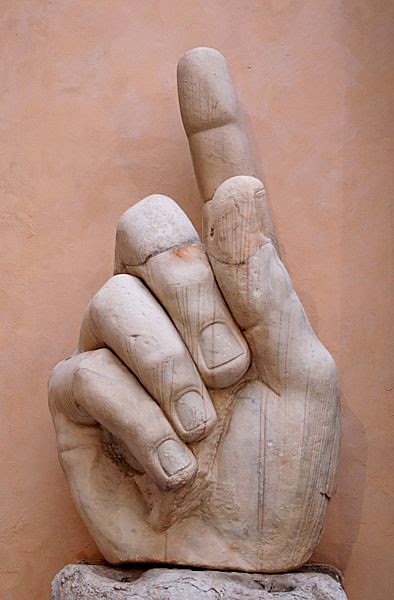 To me, the coolest thing about this is that our knowledge centers, the logical and rational prefrontal cortex and associated areas, are completely overcome by the sensory-processing centers when presented with this scenario.  We can know something isn't real, and simultaneously cannot shake the brain's decision that it is real.  None of the test subjects was crazy; they all knew that their hands weren't made of stone.  But presented with sensory information that contradicted that knowledge, they couldn't help but come to the wrong conclusion.

But as Senna's elegant little experiment shows, we just can't rely on what our senses tell us.  Data from scientific measuring devices will always be better than pure sensory information.  To quote Tyson again:  "We think that the eyewitness testimony of an authority -- someone wearing a badge, or a pilot, or whatever -- is somehow better than the testimony of an average person.  But no.  I'm sorry... but it's all bad."
Posted by Gordon Bonnet at 4:47 AM