It seems like lately, self-inquiry tests are all the rage.

They range from the banal ("What Harry Potter character are you?"  "What rock star are you?"  "What Joss Whedon character are you?") to the tried and true (the Myers-Briggs Type Indicator is still really popular) to the absurd (the various sorts of astrology).  And on the face of it, there's nothing wrong with the urge to find out more about what makes you tick.  After all, the legend "Gnothi Seauton" (Know Yourself) was inscribed on the Temple of Delphi over 2,500 years ago, and those Greek philosophers were no slouches in the wisdom department. 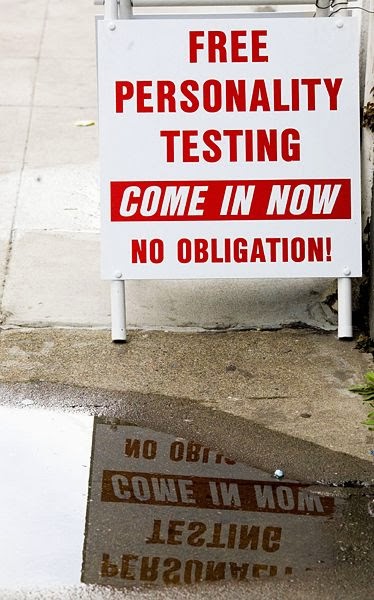 [image courtesy of photographer Thomas Hawk and the Wikimedia Commons]

Still, some of them seem to be making unduly heavy weather out of the whole thing, and I ran into an example of this just the other day.  Called "Pod'Lair," for no reason I could find, it is described as follows:


Pod'Lair methodology reads a person's innate nature, what we call their Mojo, with an accuracy never before possible, which allows humans to know themselves in truly unprecedented ways, ending the debate on whether or not people have qualia and what it involves...

Once you understand the basics of Pod'Lair theory, and you've begun to see the Mojo phenomenon for yourself, it improves your understanding of and interaction with every facet of your life, including: education, career, relationships, community, politics, spirituality...basically all of existence.

Well, naturally, I was curious about what my Mojo was, even though it's really hard for me to take anything with the name "Mojo" particularly seriously.  And it required that I send in a ten-minute video of myself, which I wasn't going to do.  The whole thing apparently hinges on subtle facial movement cues that are supposedly indicators of personality types, a bit like Bandler & Grinder's neurolinguistic programming (which honesty compels me to mention has also been flagged as having many of the characteristics of pseudoscience).  So I went to the "About Us" page, where I read passages like the following:


The Mojo Dojo Pathway is the Universal Pathway for the Language of Mojo. This pathway is focused on Mojo Reading of yourself and others, in order to understand how Mojos interact with one another in Social Alchemy. This is the objective study of Mojo, as it applies to the relationships within the Human Matrix.

Well, I think I'm at least above average at reading comprehension, and while reading a lot of the stuff on this site I was wearing a perplexed expression, my head tilted a little, rather like my dog does when I try to explain something complex and difficult to him, like why he shouldn't try to hump the cat.  Unfortunately, unlike my dog, I wasn't able just to wag my tail and forget about it all.  Some sort of perverse drive kept me working my way through this website:


It is essential to know how to rein in your top two Powers. Modulation causes stress on the system, which is Keening. The individual Mojos begin to have shut-down mechanisms designed for self-protection and energy conservation. These are healthy to a point, but over the long term they can shut the system down in a way that is damaging, temporarily or permanently, which is known as Stress Lock.

No, really, I shouldn't read any more, I really think that's...


You can generate energy from within, but as you generate that energy, it encounters the Bubble of your home and responds to it. Much like a creature in the womb reaches out consciously to get nutrients, it needs to be a conducive womb for the creature to get what it needs. This sounds simpler than it is because in many ways humans have stepped away from their Bubble being an essential part of their harmonious existence, having been told what to do by Bubbles that are already in place.

I mean, I have other things to do this morning, and it's not necessary that I...


Spirit Forms refers to the Unconscious Genius that every human has. The unconscious portions of the psyche often present themselves as autonomous entities that when dialogued with improves a human's understanding and performance in any endeavor, be it artistic, scientific, athletic, etc. The Language of Spirit Forms includes the Pathways of Spirit Ambassador (Universal Pathway) and Temple of Spirits (Personal Pathway).


Humanity is within Gaia, Gaia is within the Cosmos, the Cosmos is within Natural Law, and this all came to be where we are now. To attempt to tell the Human Collective, Gaia, Cosmos, and everything above it what to do is the height of arrogance.

OKAY.  Thank you very much.  So anyway, after I spent way more time trying to read this stuff than I should have, and coming away with the understanding that Humans Are Heroic Love And Cosmic Energy, or something, I did a little digging and found out that evidently some people who are cognitive psychologists think there might actually be some legitimacy to the whole thing (read one interesting thread here, where Pod'Lair is considered seriously along with MBTI and neurolinguistic programming theory).

What strikes me, though, is the question of how a skeptic, with a reasonable background in human neurology, could decide if there's anything to this at all from the outside -- the writing is so dense, and (frankly) so mixed up with woo-woo verbiage, that it's impossible for me to tell.  Even one indicator that the whole thing had been tested against other sorts of psychological assessments, and found to have value, would have made a difference.  Instead, under "Evidence," we're just given some vague hand-waving arguments coupled with a much longer section about why Jung, Maslow, MBTI, typology, and astrology (!) are all wrong, and that's supposed to be enough to go on.

Oh, and we're also given descriptions of the 32 basic Mojo types, including "Xyy'nai," which "engage the dynamics of human communities through interpersonal connection, social awareness, and shepherding, creating an attentive and diplomatic character." We are also told that example "Xyy'nais" are Barack Obama and Miley Cyrus.

Because those two clearly have so much in common.

Now, mind you, it's not that I think that there's anything wrong with pursuing self-knowledge. Far from it.   It's more that I have the sense that any test that purports to divide all of humanity into a small number of classes based upon artificial distinctions is doomed to failure.  And I also wonder if any of these type tests -- be it MBTI, Pod'Lair, or "What Dr. Who Character Are You?" -- is telling us anything about ourselves that we couldn't have figured out with an hour's honest self-reflection.

But being an inquisitive sort, I am tempted to send in a video.  I'd like to see what they'd make of my rather unfortunate face.  And to anyone who goes to the Pod'Lair site (which I linked above), and decides to participate -- do come back here and post the results.  Like I said before: there's nothing like actual results to support a conjecture.  And even if the evaluation of its accuracy would have to come from one's impression of oneself, it'd be interesting to see whether the whole thing has any basis in reality.
Posted by Gordon Bonnet at 2:17 AM