First, I'd like to thank my readership in general, and the people who put in donations and guesses for the 50/50 contest in particular, for their support in bumping Skeptophilia over the one million hits mark!  We hit a million at about 12:00 noon, Tuesday, April 15, and the winning guess (and winner of half of the donations) was submitted by Dorothy S. of Trumansburg, New York, who was only off by two hours!  We have chosen to donate the other half of the pot to the wonderful National Center for Science Education, for all of the work they do in fostering the teaching of science in America's classrooms.  Thanks again to all who played, and please know that I value each and every hit and comment I get.  Here's to the next million!

I've always been an animal lover.  I grew up with dogs, and have also had one or more cats all of my adult life.  Add to that a near-fanatical passion for birding, and a general fascination with wildlife of all sorts, and it's no wonder I went into biology.

My background in evolutionary genetics has also driven home the point that humans aren't as different from the rest of the animal world as a lot of us seem to think.  The false distinction between "human" and "animal" is a pretty hard one to overcome, however, which explains the argument I got into with a professor at the University of Washington over a lizard he'd killed for experimental purposes when I was in an animal physiology class.

Even back then, I understood that non-human animals die for experimental purposes all the time.  Despite my youth, I had thought deeply about the ethical conundrum of sacrificing the lives of our fellow animals for the benefit of science and medicine, and had come to the conclusion (an opinion I still hold) that it is a necessary evil.  But what I could not stomach was the professor's cavalier attitude toward the life he'd just taken -- joking around, acting as if the little warm body he held in his hand had been nothing but a mobile lump of clay, worthy of no respect.

"It's not like animals have feelings," I recall his saying to me, with a faint sneer.  "If you spend your time anthropomorphizing animals, you'll never make it in this profession."

I remembered, while he was lecturing me in a patronizing fashion about my soft-heartedness, pets I had owned, and I had a momentary surge of self-doubt. Was he right?  I began to question my own sense that my dogs and cats loved me, and were feeling something of the same kind of bond toward me that I felt toward them.  Was my dog's wagging tail when I talked to him nothing more than what C. S. Lewis called a "cupboard love" -- merely a response that he knew would get him fed and petted and played with, and a warm place to sleep?

But I couldn't bring myself to believe that thirty years ago, and I don't believe it now.  And I'm happy to say that just this week there was research published that showed that pet dogs (and probably cats as well) have the same neurochemical reaction in their brains that we do with respect to love, friendship, and bonding.

The study came from the lab of Paul Zak of Claremont Graduate University, the "world's expert on oxytocin."  He's actually written a book on it (The Moral Molecule: The Source of Love and Prosperity) and has come to the conclusion that it is the chemical basis of pair bonding, friendship, the emotional side of love, and the pleasant feelings associated with being with the people you like.  I've written about his research before, specifically about his conclusions the the oxytocin spikes during friendly activities contribute to positive social interactions of all kinds (and vice versa).  It's a nice example of the snowball effect; the more happy and social we are, the more oxytocin our brains produce; and the more oxytocin our brains produce, the more happy and social we are.

Zak has now extended his research to look at friendship-bonding in animals.  Anyone who has ever watched two dogs who are pals chasing each other will be unsurprised to hear that the oxytocin levels in dogs spikes when they're around their friends.  Now, my long-ago professor might challenge this, saying something like, "Well, of course.  They are social animals, and have evolved to depend on their fellow pack members for food, protection, and mates.  It's no surprise that they show bonding behavior and neurochemistry with members of their own species."

But Zak has found that dogs, in particular, can show the same response to members of a different species -- demonstrating pretty conclusively that dogs can form emotional bonds that are completely unrelated to evolutionary advantage, and are analogous to the reciprocal ones human pet owners experience:


At an animal refuge in Arkansas, where a large variety of animals interact with one another, I obtained blood samples from a domestic mixed-breed terrier and a goat that regularly played with each other. Their play involved chasing each other, jumping towards each other, and engaging in simulated fighting (baring teeth and snarling). Both animals were young males. We then placed the dog and goat into an enclosure together and let them play. A second blood sample was done after 15 minutes.

We found that the dog had a 48 percent increase in oxytocin. This shows that the dog was quite attached to the goat. The moderate change in oxytocin suggests the dog viewed the goat as a "friend."

More striking was the goat's reaction to the dog: It had a 210 percent increase in oxytocin. At that level of increase, within the framework of oxytocin as the "love hormone," we essentially found that the goat might have been in love with the dog. The only time I have seen such a surge in oxytocin in humans is when someone sees their loved one, is romantically attracted to someone, or is shown an enormous kindness.

All of which doesn't surprise me at all.  There is no reason any more to doubt Charles Darwin's contention in his book The Expression of the Emotions in Man and Animals -- that emotional depth forms a continuum across the animal kingdom.  We get the benefit of emotional attachments to our pets, but they experience much the same connection to us, and for the same neurochemical reasons.

Which makes me feel vindicated, honestly.  And also less embarrassed about what a complete sap I am about animals.  When we lost our aged border collie, Doolin, last November, I went into a real period of mourning -- and so, I think, did our other dog, Grendel.  But just last week we brought in a new member of the family to be a pal for Grendel. 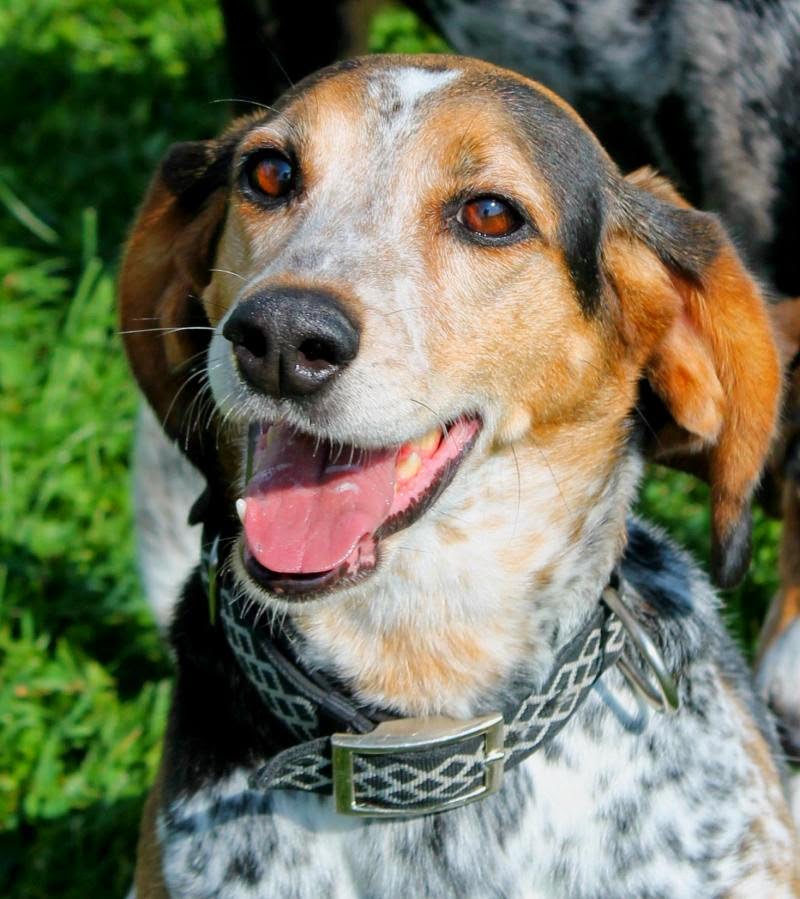 I don't know about you, but it makes me happy to know that when I come home to find a pair of wagging tails waiting for me, the feeling I experience is something that my dogs are probably experiencing themselves -- towards each other, and toward my wife and I.

Zak is right, you know.  Oxytocin rocks.
Posted by Gordon Bonnet at 2:17 AM