In H. P. Lovecraft's seminal horror story, At the Mountains of Madness, explorers in Antarctica stumble upon an ancient city that was inhabited by an alien race eons ago.  High up in the frozen, windswept mountains are the ruins of colossal buildings hewn from stone, a holdover from when the Southern Continent was warm, tropical, and covered with plant life.  Beneath the crumbling masonry and ice-covered stonework is a maze of subterranean tunnels, where bizarre creatures once roamed...

I won't tell you any more about it, because if you haven't read what (in my humble opinion) is one of Lovecraft's five best stories (my other four favorites are The Dunwich Horror, The Shadow over Innsmouth, The Colour Out of Space, and In the Walls of Eryx), then you should rectify that error immediately.

But the thing that sets Mountains of Madness apart, I think, is the novelty of setting it in Antarctica, a continent that is deeply imbued with mystery.  The ice shelves, the endless nights during the winter, the central dry valleys (a place Carl Sagan said was "about as close to Mars as we have here on Earth"), all seem hostile, inhospitable, alien, and utterly fascinating.  Which is why I immediately perked up when I saw a headline on Open Minds that said, "Did the Smithsonian Discover Alien Skulls in Antarctica?"

Of course, the problem here is twofold.  First, to judge by their content, the name of the site Open Minds apparently refers to leaving your mind so open that your brains fall out.  Other headlines on their site include, "Jaden Smith Says Obama Confirmed Aliens are Real" and "Teleporting Superhero Alien, or Video Game Character?"

Second, there is a general rule that whenever a headline of a story asks a question, the article that follows should state, in its entirety, "NO."

Despite all that, I looked at the article, which directed me to what apparently is the origin of the claim, a site called American Live Wire.  And here is what they have to say about it:


Smithsonian archaeologist Damian Waters and his team have uncovered three elongated skulls in the region of La Paille, Antarctica.  The discovery came as a total surprise to the world of archaeology as they are the first human remains uncovered from Antarctica, thought never to have been visited by humans until the modern age.

Elongated skulls have been found in Peru and in Egypt, proving past civilizations made contact long before history books want to acknowledge.

But this discovery is plain incredible. It shows there was contact thousand of years ago between civilizations in Africa, South America and Antarctica.

Well, first, I have a hard time imagining a scientist in a press conference telling the world how he has to pinch himself when he wakes up because he's so "excited."  Secondly, there seems to be no region called "La Paille" in Antarctica.  "Paille" is French for "straw," something I haven't seen much of in photographs I've seen of Antarctica, so it's a little hard to see why someone would name a place down there "La Paille."


[image courtesy of photographer Andrew Mandemaker and the Wikimedia Commons]

Third, I haven't been able to find a single mention of a "Damian Waters" who works for the Smithsonian, other than in stories about the alien skulls.  So I suspect that he was made up, along with the skulls and La Paille and everything else about the story.  The whole thing just seems to be riffing on the "Starchild Skull" bullshit about the frontally-flattened skulls found in Peru, and trying to jump it back into the news by stating that some people had found similar skulls in a highly unlikely place. 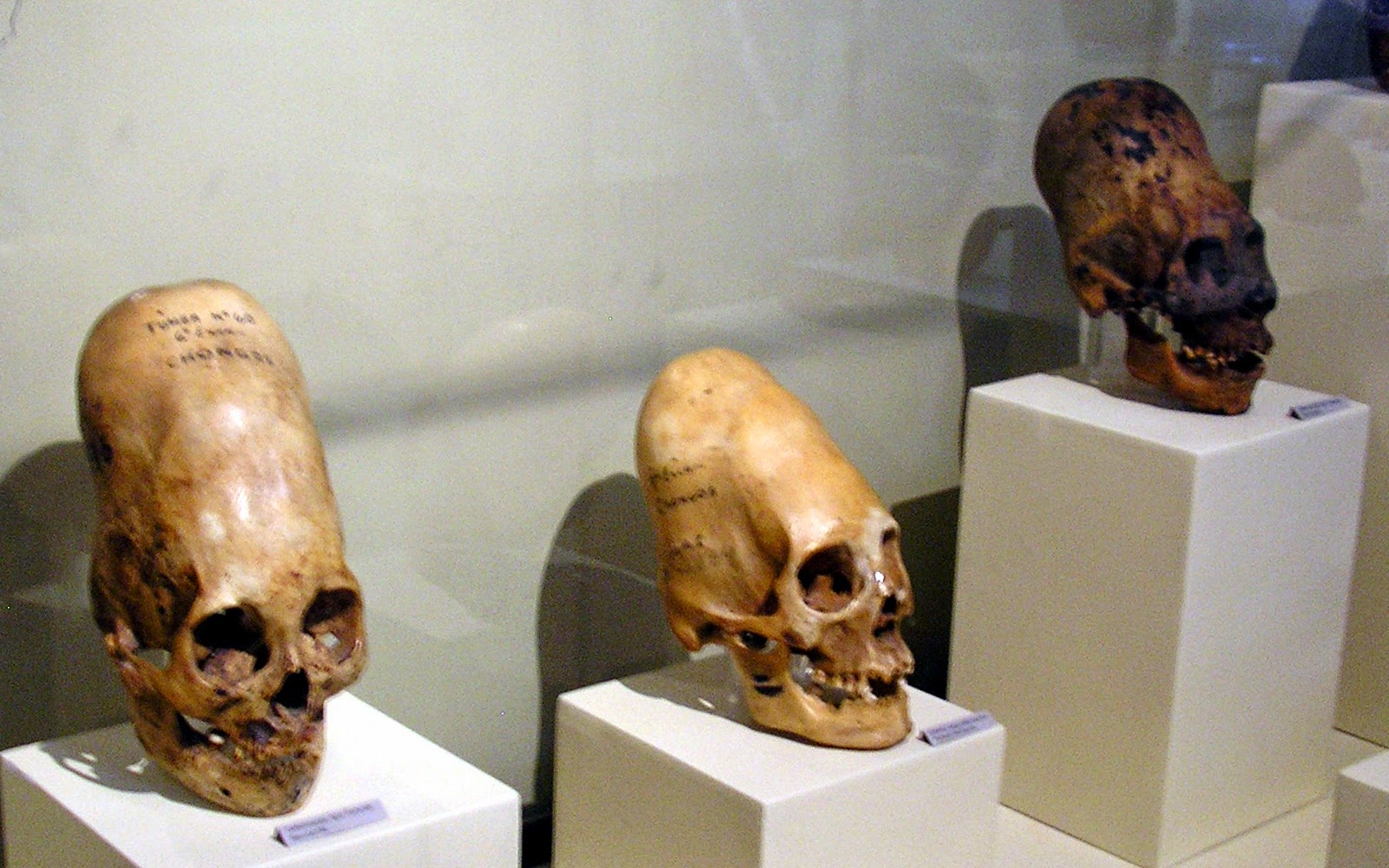 [image of the Paracas skulls in the Museo Regional de Ica, Peru, courtesy of photographer Marcin Tlustochowicz and the Wikimedia Commons]

So, it's a lie.  It's a shame, really.  Given the cachet that Antarctica has, it would be cool if there was some kind of weird mystery down there, or at least something other than penguins and leopard seals and high winds and a crapload of ice.

But this ain't it.  I still don't really get why people start hoaxes; it's not like there aren't enough cool real things to talk about.  But whether this was written by some wingnut over at American Live Wire, or whether ALW just picked it up from another source, the whole thing seems to be cut from whole cloth.

On the other hand, it might be better in the long haul that it isn't true, you know?  Lovecraft's Antarctic explorers mostly came to bad ends.  It'd kind of suck if a bunch of scientists went down there, trying to find more skulls (all the while "excitedly pinching themselves"), and they all ended up getting eaten by shoggoths.  You can see how that'd be kind of a bummer.