In the latest from the Wishful Thinking department, we have a woman in Murrysville, Pennsylvania who claims she is the Virgin Mary's first cousin, 65 times removed.

Mary Beth Webb began her inquiry into her genealogy in 1999, shortly after her brother was diagnosed with terminal cancer.  Like most of us who have done genealogical research, Webb started with census and other vital records, and used online resources like Ancestry.com and Rootsweb.  But this evidently proved inadequate -- she began to run into dead ends, which genealogists call "brick walls."  I have several of these frustrating people in my own family tree, the most annoying of which is the direct paternal ancestor of my grandmother.  His name is recorded as John Scott in all of the records -- but a recent Y-DNA study of one of his patrilineal descendants proved beyond question that he was actually a Hamilton, allied to the Scottish Clan Hamilton of Raploch.  And interestingly... two of his grandsons were named Hamilton Scott.

But fortunately for her, her cousin is a medium, and was happy to contact her parents for her, and (after his death) her brother.  And all three of the dear departed told her all sorts of details about her ancestors, because (after all) the whole lot of them were up in heaven with them.

I don't know if that'd work so well in my family.  I've got some seriously sketchy ancestry, including a guy who spent years in prison in New Jersey for "riot, poaching, and mischief," a Scottish dude who lost his soul to the devil in a game of cards, and a French military officer who almost got hanged for killing a guy he found in flagrante delicto with his wife.  So I might have better success if the medium tried contacting people down below, if you get my drift.

"Yes... great-great-great grandpa Jean-Pierre says to tell you hi, and to also to let you know you're a direct descendant of Attila the Hun.  Also, please send down an air conditioner, because it's a bit toasty down here.  Thanks bunches."

But of course, Webb's relatives all were either nicer or luckier or both, so she got scads of heaven-sent information about her genealogy.  And after a bit of this kind of "research," she found out that she was a direct descendant of Joseph of Arimathea, who was allegedly the Virgin Mary's uncle.  According to Webb's calculations, this makes her Mary's first cousin 65 times removed.

The problem is, the whole thing about Descent From Antiquity (as genealogists refer to any claims of pre-medieval proven ancestry) is that the best historians don't consider any of it to be true.  The time between the Fall of Rome and the beginning of the Medieval Age was seriously lacking in reliable documentation, and what we have in the way of such records stands a good chance of being (1) a forgery, or (2) a lie.  Or (3), both.  By the time the Medieval Age was in full swing, the Romans were looked upon as being a Golden Age, despite the fact that a good fraction of the nobility in ancient Rome seemed to have some major screws loose.  So there were lots of people claiming descent from the Emperors and Empresses to boost their own stature, with several proposed routes going the proconsul Flavius Afranius Syagrius, and thence to the Egyptian pharaohs and whatnot. 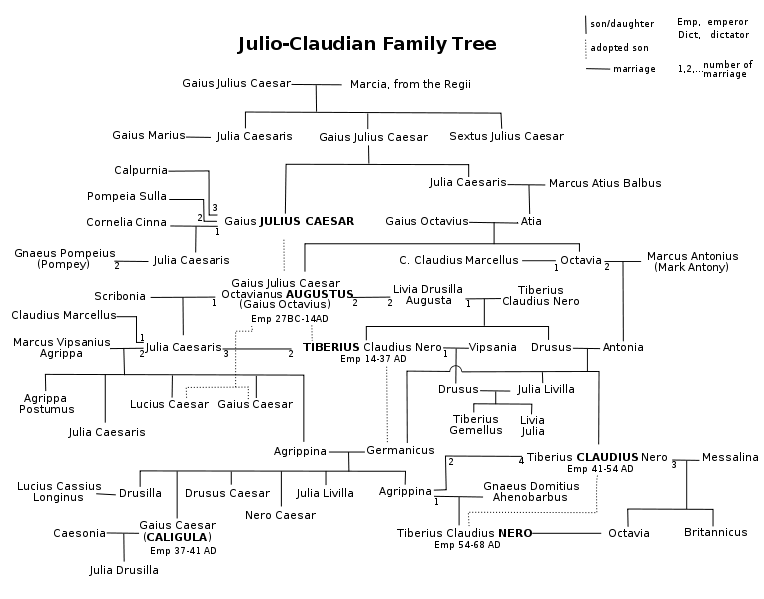 But some people one-up even Webb's claims, and trace their lineages all the way back to Adam and Eve.  I kid you not.  If you go into Rootsweb, you can do a search for people descended from Adam and Eve, and find thousands.

But, sadly, even the descent from the Romans relies on poor historical research and lots of wishful thinking, as does Webb's claim to have proven descent from Joseph of Arimathea.  About as far back as anyone with European ancestry can reliably get is Charlemagne, which sounds cool but isn't because damn near everyone with European ancestry descends from him, because he was proficient at one other thing besides ruling most of Western Europe, if you catch my meaning.

But honestly, that's really not that surprising.  Given the small size of the population back then, if you go back far enough (some geneticists say 1200 C.E. is sufficient), then you descend from everyone in your ancestral homeland who left descendants.  Put another way: prior to 1200 C. E., you can divide all of humanity into two groups; those who were the ancestors of most everyone alive on the Earth today, and those who were the ancestors of no one.  So we're all cousins, really.  And if Joseph of Arimathea left progeny -- which no one knows for sure -- then chances are, Mary Beth Webb is his descendant.

But I don't know that because my dead relatives told me so, I just know it because of genetic studies and logic.  Which may be less cool, but is a damn sight more reliable than trying to get a direct line to great-great-great grandpa Jean-Pierre down in hell.
Posted by Gordon Bonnet at 2:25 AM