I find it simultaneously amusing and terrifying how steeped in self-delusion some folks are.

Now, it's not that I think I'm always right, or free from biases.  Those of you who read yesterday's post might remember that I had something to say about that, apropos of the accuracy with which our brains function.  But still; one thing the scientific, rationalistic point of view does have is a clear protocol for figuring out when you're wrong.  And when you are...  well, you alter your theory to match the facts, or else scrap it entirely and go back to the drawing board.

But some people evidently don't work that way.  They take things the other way around.  If the facts don't line up with their favorite model about how the world works, then they change the facts.  And their altered facts, miraculously enough, always seem to support their model.  So without any apparent realization that they've just committed circular reasoning, they announce that their claim is vindicated.

You remember the whole nonsense about the Rapture, that came into the news largely because of the late Harold Camping, extremist religious wingnut extraordinaire?  Camping, you might recall, announced a date for the Rapture, and stated his case so vehemently that more than one of his followers sold all of their belongings and gave away the proceeds, or else used the money to purchase billboard space to warn the rest of us that the End Was Near.  The day before the Day, many of them bid tearful farewells to their loved ones, promising to say a good word in Jesus's ear on their behalf after all the dust settled.

Then, the next day, nothing happened.

So Camping revised his prediction to a new date, six months later.  This time he was right, he said, cross his heart and hope to vanish.  But once again, the faithful stayed put on Earth, and worse still, the Antichrist never showed.  So Camping closed up shop, and two years later, died of a stroke at the ripe old age of 92, disappointed to the last that he hadn't lived to see the Rivers Running Red With The Blood Of Unbelievers. 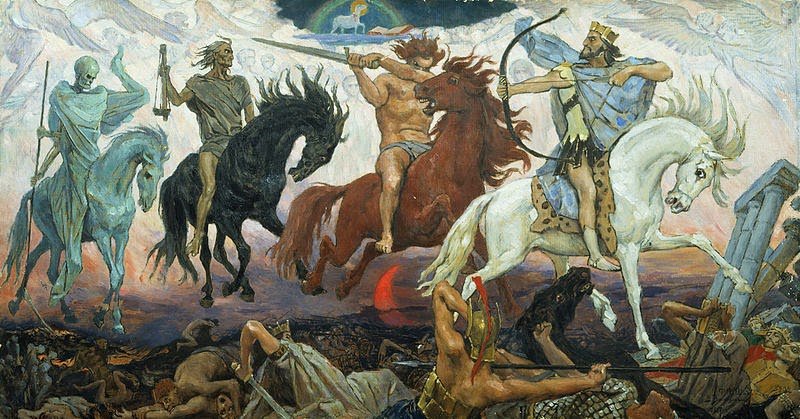 [The Four Horsemen of the Apocalypse by Viktor Vasnetsov (1887).  Image courtesy of the Wikimedia Commons.]

You'd think that sort of failure record (100%) would be a little discouraging to the faithful, wouldn't you?  We keep having predictions of the End Times, and the world refuses to cooperate, and end already.  No Beasts appear, no Antichrist, no Seven Seals; everything just kind of keeps loping along as usual.  Eventually, you'd think people would say, "Hey, you know what?  Maybe we need to reconsider all of this apocalyptic stuff, because so far, it's running a zero batting average."

But no.  They'd never let a little thing like no results change their minds.  In fact, yesterday I came across a site that claims that the Rapture did happen, and if you didn't notice, it was your own damn fault.

I'm not making this up.  According to the website Now the End Begins, the holy did too get Raptured.  Millions are missing, the site says:


Well, we told you it was coming.  Perhaps you were a casual reader of this site, but never got really involved, "too many religious nuts" you said.  Maybe you had a family member who would plead with you night after night to "get right" with Jesus before His return.  "Nah, never happen", you said, "people been saying that for ever.  Nonsense!".  But, it wasn't nonsense, was it?  Turns out the religious nuts were right after all.  The Rapture of the Church actually happened.  Now we are gone, and you remain.  Left behind.  I can only imagine the shock - terror - panic - and questions that must be running through your head right now.  My heart breaks for you, and that's why I made this page, to get you through what the Bible calls the time of Jacob's Trouble, the Great Tribulation, and it's moments away from starting.  Are YOU ready?

What do you mean "we are gone?"  If you're gone, who is writing for and maintaining the site?  Are you suggesting that Heaven has WiFi and a fast internet connection?  Is the server hosted by the Lord of Hosts?  What do you do if Christ wants to use the Holy Computer while you're updating the website?  Do you tell him, "I'm sorry, Jesus, but you'll have to surf the web another time?"

But my main objection is, if all of those people really had disappeared, don't you think someone would have noticed by now?  Sure, the website tells us.  We all did notice.  And apparently, we're all pretty puzzled about it:


And that's exactly what just happened, and where we have now gone.  Oh, knowing the media as I do, I am sure that there are many attempts to explain it - UFO's, alien abductions, a harmonic convergence, a government program, FEMA camps, cosmic shift, worm holes, and the list goes on and on.  But none of those explainations really satisfy you, do they?  I mean, it's hundreds upon hundreds of millions of people, right?  Could any one government, no matter how corrupt, really process that many people in the "blink of an eye".  No, they could not.  You know better than that.

Because, of course, the teensy little problem with all of this is that everyone seems to kind of... still be here.  While I understand that given the circles I travel in, it's understandable that none of my immediate friends and family were Bodily Assumed Into Heaven, you'd think that at least one or two casual acquaintances would be amongst the hundreds of millions who were holy enough to be Raptured.  Strange to say, I haven't noticed anyone in my community vanishing lately.  I really don't think that I'd have missed something like that.  There are even a few I can think of that I'd be happy enough to wave goodbye to, as they floated off into the sky, but no such luck.

The rest of the site consists of suggestions about what to do now that we've been Left Behind (number one piece of advice: don't accept the Mark of the Beast).  But all of that really pales by comparison to the opening bits, wherein they tell us that the Rapture happened while we were otherwise occupied, and we Ungodly Types have yet to notice.

I've said before about the extremely religious that they'll never let a little thing like facts stand in the way of their beliefs, but this may be the best example yet.  The whole thing reminded me of the words of George Aiken, Republican senator from Vermont, who said, when it became obvious that the United States was losing the Vietnam War, "The best policy is to declare victory and leave."  Or in this case, don't let the fact that the Rapture didn't happen interfere with your conviction that the Rapture has actually happened.

Me, I'm just going to do what the world does, namely, keep loping along and not worry about it.  Even if the UltraChristian crowd is right, I'm pretty certain to be Left Behind anyhow, a possibility that doesn't scare me much.  I've read the Book of Revelation more than once, and I have to point out that whatever else you can say about it, the apocalypse sounds interesting.  There's the Scarlet Whore of Babylon and the Beast with Seven Heads and the Star Wormwood and the Four Horsepersons and various other special offers from the God of Love and Mercy, any one of which would certainly alleviate the boredom around here.  So if the Rapture really has already happened, let's get this apocalyptic ball rolling, okay, people?  The End Times are a-wastin'.
Posted by Gordon Bonnet at 2:22 AM