I would have thought that most of us knew enough science, and had discarded enough superstition, to be past the "Look For Portents In The Sky" approach to knowledge.

The next couple of years are going to be unusual in having four total lunar eclipses, the first of which happened two days ago.  (Subsequent ones will occur in October 2014, April 2015, and September 2015.)  Which is quite spectacular and cool, although I must protest to the Weather Gods (speaking of indulging in superstition) for sending upstate New York cloudy weather a couple of nights ago, obscuring our view of the first in the "tetrad." 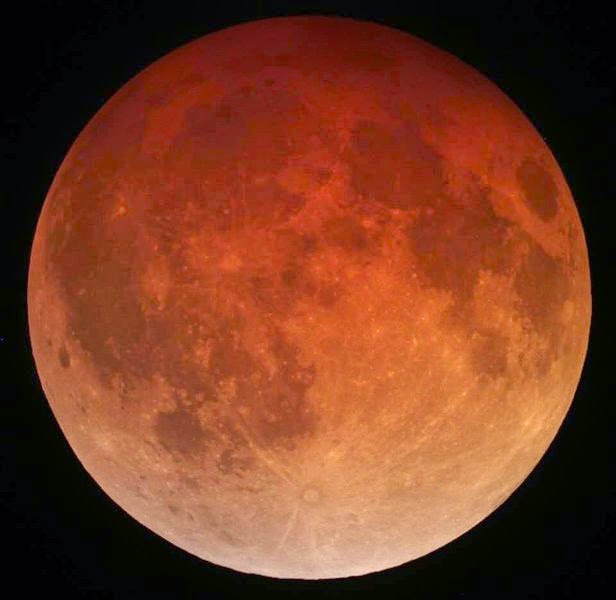 [image courtesy of photographer Alfredo Garcia and the Wikimedia Commons]

So far, only something of interest to astronomy buffs.  But then someone nicknamed them "blood moons," because of the deep red color the Moon assumes during a total lunar eclipse, and that was enough to get the loons going full-force.

First, we had Pastor John Hagee, of Texas's Cornerstone Church, who claims that the "four blood moons" are signs of the End Times:


In Acts 2:19-20, it is written, “And I will show wonders in Heaven above and signs in the Earth beneath, the sun shall be turned into darkness and the moon into blood before the coming of the great and awesome day of the Lord...”  Just as in biblical times, God is controlling the sun, the moon, and the stars to send our generation a signal that something big is about to happen.  The question is: Are we watching and listening to His message?

Oh, but Hagee says, stuff happened both times!  Big stuff!  1967 was the year of the Six-Day War between Israel and Egypt, and 1949 was... um... soon after the state of Israel was founded.  Okay, two years after, but maybe god was busy elsewhere and didn't get to that event's Four Blood Moons until later.  He's got a lot to manage, okay?

Not to be outdone, Pastor Mark Biltz said that not only were the Four Blood Moons a portent of evil, it was President Obama's fault:


Barack Obama quite recently, expressing his frustration that Republican members of Congress won’t give him what he wants, threatened arbitrary executive action, promising that he has a “pen and phone.”

But there are “flashing red warning lights” in the heavens that should command peoples’ attention right now, because the one behind those warnings, God, had “more than a pen and a phone in his hand,” according to the author of “Blood Moons: Decoding the Imminent Heavenly Signs.”

Pastor Mark Biltz, whose book is creating a tidal wave of interest right now with the first of four lunar eclipses expected to become visible early Tuesday, was speaking to Breaking Israel News...

“I believe the moons are like flashing red warning lights at a heavenly intersection saying to Israel as well as the nations they will be crossing heavenly red lines and if they do, they will understand as Pharaoh did on Passover night 3,500 years ago that the Creator backs up what He says.

“Like Pharaoh the leaders and pundits of today will realize when it comes to crossing the red lines of the Creator of the universe he has more than a pen and a phone in his hand.”

Whooo-weee, that's one persuasive argument.  "The Moon looks funny tonight" + "I don't like Obama" + "I don't understand science at all" = "God agrees with my political beliefs and is trying to send the Democrats a sign by coloring the Moon red."

Well, can't argue with that.

What's funniest about Biltz's argument, though, is that he's acting as if somehow god could have stopped the lunar eclipses from happening, if only President Obama had been a good boy.  It's not like we haven't known for years that this "tetrad" was going to occur; it would have happened even if Mitt Romney had been elected.  So how the hell can this be a portent of anything if it would have happened no matter what?

And the scary thing is, Biltz and Hagee are only two of hundreds.  If you Google "blood moons end times" you will get thousands of hits on sites all owned by people who apparently don't know a single thing about planetary astronomy.

I shouldn't let this kind of thing frustrate me, I suppose, but I keep hoping that humanity will one day choose science over superstition.  People like Hagee and Biltz, however, don't make it easy, with their appeal to people's primal fears and political biases.

As for me, I'm just going to enjoy the photographs people have posted of the event, and hope for better weather in October.  And I'll be willing to bet that we'll make it through all four lunar eclipses unscathed, with no sign of the Antichrist -- just as we've done countless times in the past.
Posted by Gordon Bonnet at 3:51 AM