Okay, I know I'm no genius, but I think I can place myself with confidence in the "above average intelligence" category.

A few things, however, defeat me.  A lot of physics rests on mathematics that I frankly do not comprehend, despite my B.S. in physics and minor in math.  When I look at academic papers from physics journals, and am confronted with such arcane beasts as tensors and cross products and weak isospin, I become tense, my eyes cross, and I become all weak and spinn-y.  (I usually require at least one glass of scotch to recover completely.)

Likewise, the deeper waters of philosophy drown me entirely.  I read the first paragraph of a friend's Ph.D. dissertation in philosophy, and said, in a rather thin voice, "That's... nice," and decided forthwith that I should confine myself to the epistemological and metaphysical questions raised by The Cat in the Hat instead.

With the exception of the aforementioned, however, I can usually hold my own fairly well in intellectual pursuits, which is fortunate, given that I'm a teacher.  So it is seldom that I look at a sample of writing, study it from various angles, think about it, and then still come up completely empty-handed.  Which is what I did when I looked at a website called Infinity Codes that a friend sent me, along with the message, "Curious to see what you'll think of this."

What I thought, after forty-five minutes' increasingly perplexed study, was (to borrow a line from the inimitable Eddie Izzard), "Quod... the fuck?"  And lest you think that I'm just being lazy -- or, perhaps, that my brain isn't as all-that-and-a-bag-of-potato-chips as I claim it is -- here's a sample, so you can make your own assessment:

Split into 4 sets of templates the Infinity Codes have been designed to assist re-establishing our connection to the cycles of the cosmos and the earth (macrocosm and microcosm). The codes are arranged in a fractal sequence in order to reveal the spiral thread of interconnected-ness between us, nature and the universe...

Their purpose is to liberate and inform us with the knowledge of geometric patterns, fractal harmonics and organic ratios of the 13D reality in which we live. Each graphic has ancient wisdom encoded within it that our ancestors knew and based their systems of time and space measurement upon.

Living in a non-linear matrix of time and space, which they understood primarily through observing the movements of the 7 visible ‘spheres’ (5 planets + sun + moon), our ancestors were far beyond us in their development. This enabled them to perceive the fractal design of the tree of life, and our place in it - via the 28 = (4x7), the 365 = (13x28) +1, and 365.242 (1 year). This created a fractal matrix of the alchemy of the organic + geometric, that could then be aligned to zodiacal + celestial, in an eternal map of the cosmos.

And that's just from the freakin' introduction.

If you go to "What is the context?" -- a question I was certainly asking by this point -- you read the following:

Living in the end times (Solstice Sun aligned with the Galactic Center), beginning of the 21st century (7:7:7), Age of Aquarius geometrically speaking, yet in reality (organically speaking) the Age of Aquarius starts circa 2600ad, information Age, cyber era… Peak moment of 2012, Dec 21st, next Winter solstice!

Well, what strikes me about this is the part about the Sun being lined up with the Galactic Center at the beginning of the 21st century.  Which is true, but can someone explain to me how two points could not be lined up?  I mean, didn't Euclid have something to say about this?  If somehow the Sun and the Galactic Center didn't fall on a straight line, that would be a little odder, don't you think?

And then, we have mystifying illustrations like the following: 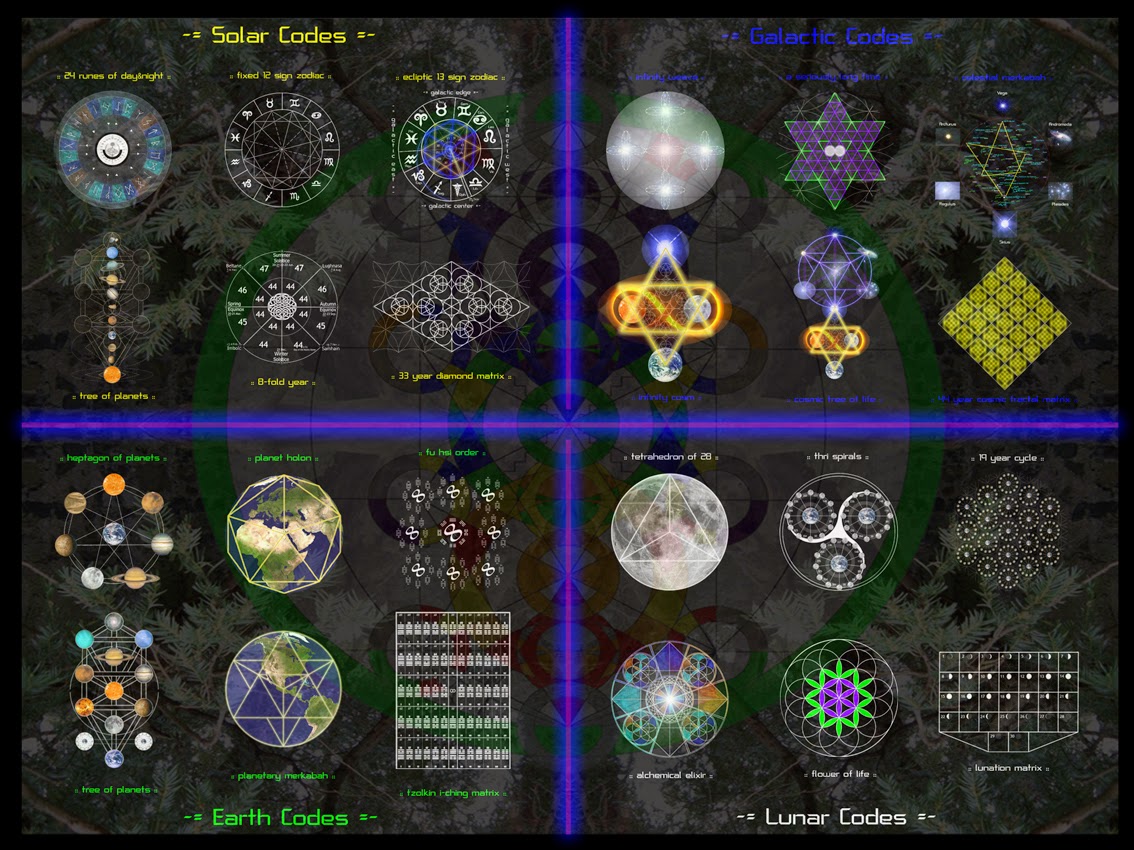 Which are pretty, I suppose, but what the hell do they mean?

But if you really want to make your head spin, though, go to the page called "Cosmic Formulas," wherein we get to see the mathematical basis for all of it.   I think.  I mean, as far as I can tell, and applying my reasonably decent background in mathematics, it looks like he's just multiplying random numbers together, adding them to other random numbers, and saying, "So cosmic, right?  Of course right."

I finally gave up after about an hour of messing about on the site.  What finally induced me to quit was when I caught a glimpse of my reflection in the monitor screen, and I realized that my expression looked like that on the face of my dog when I try to explain complex and difficult concepts to him, like why he shouldn't dump the garbage and eat the plastic wrapper that the cheese came in.  He tips his head to one side, his brow furrows, and he gets this really... intent look in his eyes.  You can tell that he wants to understand, he's trying his hardest, but it's just not going to happen.

That's the way I looked after an hour of trying to decipher the Infinity Codes.

Maybe you'll be able to make more of it.  If so, please enlighten me.  I'm perfectly willing to admit when I'm out of my depth, as I was with my friend's dissertation, and acknowledge the better understanding that someone else might bring to bear on a subject.  On the other hand, I strongly suspect that here, there's nothing actually there to understand, and that we all might be left (like Eddie Izzard) saying "Quod the fuck?"
Posted by Gordon Bonnet at 2:07 AM