Sometimes I can simply laugh at the goofy ideas people have.  It was the genesis of this blog, really; to shine some light, both in the sense of "illumination" and also in the figurative sense of "light-heartedness," on the loopy stuff that we see on a daily basis.  And being a naturally optimistic person, I like it when my daily excursion into wingnuttery doesn't bring me down.

But there are times that I just want to scream.

Like today.  Because the conspiracy theorists are already howling about the Fort Hood shooting being a setup, a false flag, a hoax, before the victims have even been named, barely giving the smoke time to clear. 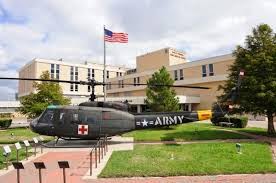 [image courtesy of photographer Michael Heckman and the Wikimedia Commons]

What, it's not enough for you people that four people are dead, including the shooter, and sixteen are wounded?  It's not enough that the gunman's widow, the mother of a three-year-old child, was "hysterical" upon finding out what her husband had done?  It's not enough that she now has to cope with raising a child who will forever live under the stigma of her father's crime?

Nope.  The tragedy itself is never enough for you people, is it?  It always has to be more.  It always has to be a plot, a piece of the Big Evil Puzzle that is how you see the world.  Don't believe me?  Here's a sampling of the comments that appeared on the Conspiracy subreddit today:


SOLDIERS shooting SOLDIERS means only one thing... TYRANNY... someone CHOOSE [sic] GOD OVER MONEY... IF you believe what the ZIONIST BANKER OWNED MEDIA SAYS your [sic] TRULY ASLEEP... YOU have chosen the GREEN PILL OF THE MATRIX...

Active shooter = false flag know that the words coming from the media is a LIE.  ACTIVE SHOOTER IS ALL WE HERE.  STOP THE FAKE SHOOTINGS FUCKERS!!!

Wherever u hear the phrase ACTIVE SHOOTER. this is a drill people. just another hoax!!!  Active shooter = drill and or false flag to disarm the people.  Watch how shady this BULLSHIT story changes 100 times!

Another Obama Muslim gone psycho?  I suppose Obama will also give this brutal attack another mere "workplace violence" status instead of a "military attack" or "invasion."  I smell another Obama false flag plot, like all the rest of the phoney-baloney false flag terrorist attacks.

This is a distraction, people.  They're getting too close to finding Flight 370 and needed something to turn our attention to.  Every time we get close to the truth, they set up something like this and most Americans fall for it.  Wake up!

Okay, let me say this loud and clear, so you wackos can hear me:

You have zero information on this.  You are doing what you do best, which is making shit up to force the story to conform to your warped worldview.  The shooter -- Ivan Lopez -- is only now being investigated, and so we don't yet know who he was or why he did what he did.  Could he have been a terrorist?  Maybe.  Could he have been some kind of Muslim convert, with a jihadist axe to grind?  I guess, although there's no indication of it.  Could he have had PTSD and had some kind of psychotic break?  Possible.  The point here is that you don't know, and I don't either.

The difference is that I'm not claiming that I do.

What I find most stomach-turning about the people who yammer on about this sort of thing is that they really feel like they're being noble and courageous and iconoclastic by making these sorts of statements.  But you know what?  All it amounts to is using the human cost of an as-yet unexplained tragedy to score political points, which when you think about it, is kind of the opposite of noble and courageous.  Because they don't care about facts, or logic, or evidence; all they care about is using any means they can to bolster a bitter, twisted worldview that sees everything in the world as evidence of a conspiracy.

It may be that in the days to come we will find out more about Ivan Lopez and why he took a gun and shot 19 of his fellow soldiers.  Because Lopez ended the shooting by taking his own life, it may be that we will never know.  It is the sad truth about many tragedies of this type that the real reasons behind it might be forever out of our reach.

So to the wackos who are circling around this story like flies around roadkill, I would like to recommend that you do what a responsible person does when (s)he has no facts or information: shut the fuck up.
Posted by Gordon Bonnet at 2:16 AM