How to piss off an ecologist

There's a fundamental disconnect in the American brain.  I suspect that it's also true in most other "First World" countries, but that's only supposition.  I can say with some assuredness, however, that it's true here in the United States, because I've witnessed its results over and over.

This disconnect has to do with where stuff comes from, and where it goes after it's out of our sight.  If you asked people, for example, what the most common pigment in ordinary white paint is, most folks wouldn't know, despite its ubiquity.  (It's titanium oxide, zinc oxide, or a combination, if you're curious.)  Likewise, once something hits the trash can, it most people's minds, it's gone -- very few have any knowledge of, or interest in, what happens to garbage once it gets to a landfill.

This is an even stronger tendency when it comes to our own bodies, especially the "where stuff goes" part, because there's the added icky-poo factor when it comes to dealing with our own bodily wastes.  The concept of "materials cycling" is sadly lacking in our consciousness, most of the time.  When I tell students, "Every molecule of water in your body has been in many forms -- it's been glacial ice, it's been in the ocean, it's been in rivers, it's been water vapor in clouds, it's been groundwater, it's been tree sap, it's been in dinosaur piss," it usually elicits a few disgusted exclamations and a good many looks of disbelief.  When I further tell them that the molecules of water in them today aren't going to be the same ones that will be in their bodies in five years, mostly what I pick up from them is complete incomprehension.

It's true, though; this collection of atoms I call "me" is only going to be in association temporarily, and I'll be made up of a whole different collection of atoms, albeit in more or less the same configuration, many times before I die.  Earth is the great recycler, and unless the mechanism is pressed too hard, it moves stuff around with great efficiency, into, through, and out of organisms and ecosystems.

Which is why I thought it was somewhere between funny and horrifying that Portland, Oregon water management officials chose to drain 38 million gallons of water from the Mount Tabor Reservoir after security cameras caught footage of a teenager peeing into the reservoir. 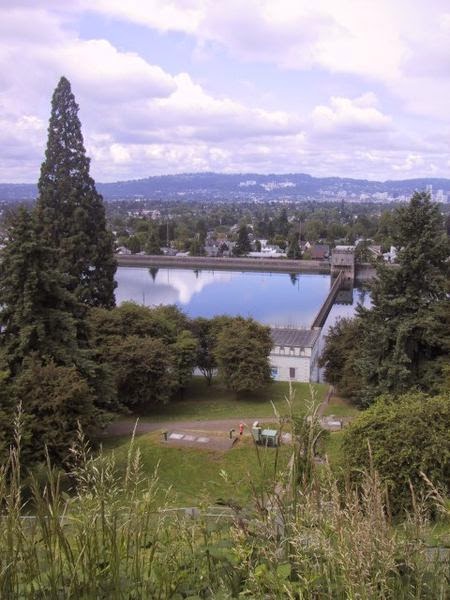 First off, don't they realize that other animals live around the reservoir?  Deer, raccoons, and bunnies don't pee in tidy little Non-Human-Mammal Port-a-Potties in the woods, for cryin' out loud.  Every drop of water you drink has been processed many times through another animal's digestive and excretory system -- and once the solutes are removed, either by natural or artificial processes, what's left is pure, drinkable water.

Second, we have an issue of the water officials not understanding the concept of "dilution" here.  The officials said that the urine poses "little to no risk" to the public -- which is true if you put emphasis on the "no" part -- but Portland Water Bureau official David Shaff told the Associated Press, "The basic commandment of the Water Bureau is to provide clean, cold and constant water to its customers, and the premise behind that is we don't have pee in it."

Sure you don't.  No animals pee near the reservoir, because, you know... they have signs up forbidding it.  ("No pissing allowed.  That means YOU, Bambi.")  But if the real concern is the human pee -- because humans, after all, are somehow different than other animals -- let's see how much pee there is in the reservoir from the one "incident" they caught on the security camera.

A webpage on kidney health from the U. S. Department of Health and Human Services says that an average person's bladder capacity is about 1.5 to 2 cups.  According to Wikipedia, urine is 95% water and 5% solutes (the one usually in the highest concentration is urea, a biodegradable nitrogenous waste; the next three, in order, are chloride, sodium, and potassium).

But never mind that.  Let's lump the 5% solutes together as the "icky" part.  So we have two cups of urine (assuming the guy really had to go bad), of which 5% is something other than water.  That's 0.1 cups of solute...

... mixed in 608 million cups of water in the reservoir (38 million gallons times 16 cups per gallon).  That is a ratio of 0.00000000016 : 1.  And that doesn't even account for the fact that microorganisms take up and degrade the urea and most of the other organic molecules, so within days, even that would be gone.

These are concentrations that only a homeopath would be concerned about.

Now, I know that there have been studies that have found human sewage contaminants in river water -- most famously, a study of the Thames River in which there were measurable (albeit small) amounts of the breakdown products of cocaine, diazepam, caffeine, acetaminophen, nortriptyline, and other legal and illegal drugs in river water.  Keep in mind that we're talking about a huge population -- the water that comes out of the London sewage treatment system, and into the Thames, has been filtered through a great many kidneys before it ends up in the treatment plant -- and still the amounts were tiny, averaging below one part per million.  (It's still being researched if these chemicals remain biologically active at those concentrations.)

But one kid taking a piss in the reservoir?  Not an issue.  Not even close to an issue.  Okay, ticket him and fine him for public urination, if you want to make a deal out of it.  But draining the reservoir, at the taxpayers' expense, because the water monitoring board of Portland (and/or their constituency) has no understanding of materials cycles or dilution, and an exaggerated "this-is-gross" reaction to human waste?

Ridiculous.
Posted by Gordon Bonnet at 5:01 AM