Nikola Tesla vs. the Martians

I'd like to go on record as saying that claiming that a scientist said or did something crazy, which (s)he almost certainly did not say or do, is dirty pool.  Especially when said scientist is dead and cannot mount an effective counter-attack.

It's bad enough when (s)he's alive, as theoretical physicist and prominent science writer Lawrence Krauss found out, when some wackos who believe that the Earth is the center of the universe cherry-picked quotes from his talks to make it sound like he agreed with them.  (For Krauss's blistering response to the perpetrators, take a look at his article in Slate.)

But of course, one does not have that kind of recourse when one is dead.  Which explains why Einstein's quotes show up hither and yon to support all sorts of stuff, from theism to atheism to quantum-consciousness-frequency lunacy.  All of which makes me kind of hope that there's no afterlife, because it pains me to think of poor Einstein, watching his name being taken in vain by unscientific wingnuts, and not being able to do a damn thing about it.

But lately, Einstein has been supplanted as the Most Misleadingly Quoted Scientist by a different man, whose work is cited by a different group of wackos for different reasons.  This scientist is mostly cherry-picked to prop up claims like Infinite Free Energy (and the conspiracy theories regarding government coverups thereof), UFO antigravity propulsion systems, and superpowerful directed energy weapons.  He allegedly had all of this stuff figured out, but depending on whom you believe, (1) his research was actively suppressed during his lifetime, (2) all of his relevant papers were mysteriously destroyed after he died in 1943, or (3) he forgot to write it down.  All of this explains his current surge in popularity (forgive the pun) -- because of course, I am referring to the brilliant electrical engineer, Nikola Tesla.

Tesla was certainly a genius, even if you only consider the things he actually did.  There's the Tesla coil that bears his name, not to mention his well-known work with alternating current, the induction motor, radio-controlled machines, wireless telegraphy, and a bladeless turbine.  He spoke eight languages fluently, had an eidetic ("photographic") memory, and was gifted with flashes of insight that would often result in his drawing diagrams from memory that would then guide his further pursuits.  He died in possession of 278 patents -- but died in debt and impoverished, which (of course) further adds to his mystique.

So it's no wonder that Tesla is a favorite amongst the woo-woos.  Which is why just yesterday, there was an article on the fantastically wacky website Exopolitics by our pal, Skeptophilia frequent flier Alfred Lambremont Webre, called, "Nikola Tesla Re-started Earth's Exopolitical Communication with an Intelligent Civilization on Mars in 1901."

Just the title makes so many ad hoc claims that it might be sufficient simply to analyze it, but we would be remiss in not looking at the text.  And it does not disappoint.  Webre doesn't beat around the bush:


There is substantial documentation of Nikola Tesla's role as an early pioneer in re-establishing in 1901 public exopolitical communications between our Earthling human civilization and an intelligent civilization on Mars, most probably our human cousins known as homo martis terris. Public Earth-Mars exopolitical communications had most probably been severed since the solar system catastrophe of 9500 BC that greatly damaged Mars atmosphere and its surface ecology, and destroyed Earth's great maritime civilization.

The "great maritime civilization" is, of course, Atlantis, and the "jump room" is the teleportation chamber via which the CIA has been transporting people to Mars, beam-me-up-Scotty style.  These individuals apparently include President Obama, who Webre says was seen on Mars by Seattle lawyer and noted wackmobile Andrew Basiago.   But this is just the outer skin of the onion, because apparently there are intelligent creatures on Mars -- not just lots of dust and rocks, which is pretty much all the Mars Explorer has found, despite numerous claims to the contrary.

Now, apparently it's true that Tesla once made a claim that he'd received a radio signal from Mars.  The signal, Tesla said, contained the following message: "1...2...3...4."  Which doesn't seem like a very intelligent thing to say, considering all the other things that one could say.  I mean, if I was on Mars, and I realized that someone on Earth was listening, I'd probably say, "It is really dry and cold and dusty up here, please send a rescue ship RIGHT NOW."  But Tesla thought it might be from the Martians, and proceeded to send messages back, none of which were ever answered.  We now think that he'd picked up signals from the magnetic field fluctuations of Jupiter, and eventually even Tesla moved on to other stuff.

As proof of Tesla's involvement, and his communications with Martians, Webre has large quantities of quotes from Tesla that really don't prove much of anything except that Tesla seems to have wanted to communicate with Martians.  He also has the following advertisement: 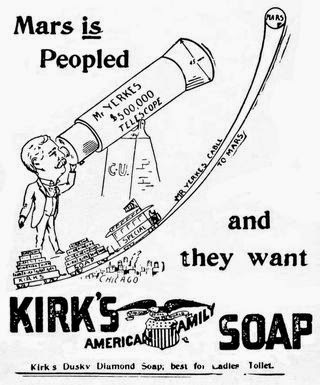 So that cinches it, then.

And all of that is apparently enough for Webre et al.  After quoting Tesla ad nauseam, he goes on into even more rarefied air.  He devotes a large section of his article to the research of Gregory Hodowanec, who has received radio transmissions that were either from somewhere in the constellation Andromeda or else from a Martian named "AAAAAATTT."  I'm not making this up.  Hodowanec told Webre all about his communications, and ended by saying, "I would appreciate that you keep this info somewhat confidential now.  The Earth may not be ready for what I will have to say eventually.  Nothing dire, just fantastic and thus perhaps unbelievable!"

So Webre put the whole thing online, including Hodowanec's request, which I find kind of funny.

The problem is, of course, that Tesla may have been a visionary, but he wasn't insane (the jury is still out on Hodowanec).  So I have no doubt that he would have been swayed by the evidence, as any good scientist is.  Or in this case, the lack of it.  Mars is significantly uninhabited, and I don't think the situation was any different 113 years ago.  Quote-mining Tesla's papers to support some crackpot theory doesn't make it true, and it's really hardly fair, given that Tesla himself is not around to defend himself. 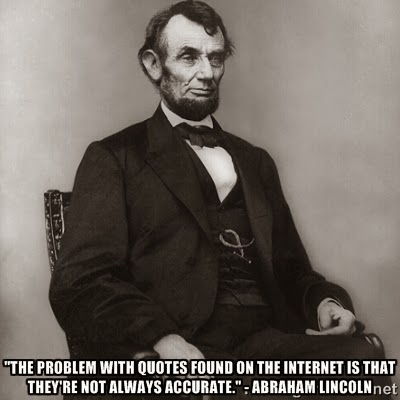 I hate to say it, but it's getting to the point that whenever I read anything online that has Tesla's name attached to it, I immediately put on my suspicious face.  Which is unfortunate because I know he did some really forward-thinking research, much of which I have yet to investigate, and it'd suck if I missed out on learning about something Tesla actually did because of loons like Webre.

So that's today's voyage through the stratosphere.  How Nikola Tesla definitely didn't talk to someone on Mars.  There's no one up there on the Red Planet, more's the pity.  If there was, NASA would know about it by now, and scientists would be trampling each other to death trying to get first dibs on studying the Martians, because how cool would that be?

And just for the record: I would certainly need more than an early 20th century advertisement for soap to convince me otherwise.