Speaking up against the lunatics

It hasn't been a good week for reasonable, moderate Christians.

Which, allow me to point out, the majority of them are.  Even the ones who consider themselves very devout do, by and large, follow the most important of Jesus's dictums, namely, "Love thy neighbor" and "Treat others as you would be treated."  There are Christians whom I count amongst my very dear friends, and although we may differ regarding what we think the ultimate answers are to Life, the Universe, and Everything, we all get along pretty well by following the general rule of Don't Be An Asshole.

I can't help but think that the reasonable Christians, though, might oughta have a word with some of their leaders.  Because let me tell you, those folks need either to stick a sock in it or else get professional help, because lately the lot of them sound like they've lost their minds.

Let's start with our dear old friend Pat Robertson, who you'd think by now would have also lost most of his audience, given the way he blathers on.  He has variously claimed that Katrina was god's punishment on New Orleans, the 2010 earthquake was god's punishment on Haiti, and god was going to punish little kids for indulging in Halloween because the candy they were being given had been cursed by witches.  So old Pat has had a screw loose for some time, but for reasons that are beyond me that hasn't stopped people from watching his television show, The 700 Club.

And this week, Pat told his listeners something horrific; that what we saw with Katrina and the Haitian earthquake was peanuts.  God had something even worse in his arsenal, and it was going to happen soon.  God has had it with us.  No weaseling out of it this time. 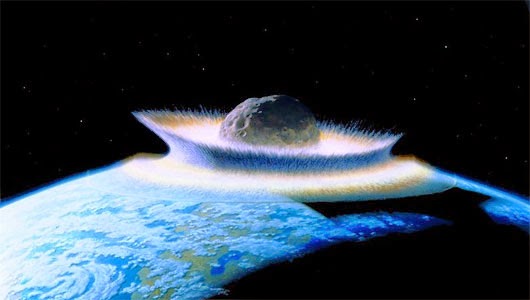 [image courtesy of artist Don Davis and the Wikimedia Commons]

Yes, based on Pat's extensive knowledge of science, he has concluded that wacky apocalyptic stuff in the Book of Revelation is all about an asteroid hitting the Earth.  I dunno how that accounts for the Mark of the Beast and the Scarlet Whore of Babylon and so on, but I guess his mind was made up (actually, he said he knew because god told him personally) -- sufficiently that Pat has written a book about it, called The End of the Age.

"I wrote a book!" Pat told his viewers.  "It deals with an asteroid hitting the Earth.  I don’t see anything else that fulfills the prophetic words of Jesus Christ other than an asteroid strike.  There isn’t anything that will cause the seas to roil, that will, you know, cause the skies to darken, the moon and the sun not to give their light, the nations terrified on Earth of what’s happening.  There isn’t anything that’s going to do that."

Now, lest you say to yourself, "Well, that's just Pat Robertson, and we all know he's a loon," what about Franklin Graham, the pastor son of Billy Graham?

The elder Graham, however fundamentalist he is, always struck me as a compassionate and honest man.  His son, however, appears to be more cast from the "rant and rave while making random shit up" mold.  On Newsmax's "America's Forum," the younger Graham went on record as saying that Christians are being persecuted and attacked, especially by the media.

"Are we at a point now that is maybe unparalleled in history, about the amount of anti-Christian behavior and sentiment... rising around the globe?" the interviewer asked him, and Graham responded, "We do see it rising around the globe, no question about it, and it's frightening.  We see the anti-Christian position in this country, so much of it coming out of the entertainment industry, especially in certain segments of the news media.  Christians are being attacked...  We are living in a world that is changing, and it's frightening to see how quickly it's changing.  And I think we're going to see real persecution of Christians and Jews in the years to come."

Really?  Persecution?  Here in the United States?  Maybe you're confusing "no longer having carte blanche" with "being attacked," Reverend Graham.  And regarding the entertainment industry -- can I remind you that there have been two, count 'em, two movies so far this year that were biblical epics -- Noah and Son of God -- not to mention the rather defensively-titled God's Not Dead?

But the winner in the lunatic rant contest this week has to be Ray Moore, president of Frontline Ministries and candidate for lieutenant governor of South Carolina, who is trying to get Christian parents to take their kids out of public schools because he thinks that 40% of children are turned into atheists by the evil public school system -- by the end of elementary school.

"It’s our hope and prayer that a fresh obedience by Christian families and educating their children according to biblical commands will prove to be a key for the revival of our families, our churches, and our nation,” said Moore told a gathering of Tea Party activists on April 12.

"Christians must leave the Pharaoh’s school system, and seek out religious schools or home schools," he said, to wild applause.

"We cannot win this war we’re in as long as we keep handing our children over to the enemy to educate.  All of the symptoms, the things that we’re fighting and complaining about today has [sic] been caused because the culture has changed.  The culture has turned against God, against the Constitution, and against traditional values.  It’s fundamentally and largely responsible because of the public school system we’ve had (for) six or seven generations, when most of us have put our children in the godless, pagan school system.  It cannot be fixed, the socialistic model, and we need to abandon that.  As conservatives and Christians, if you think you’re going to win this war you’re in, and leave your children in those schools, it will not happen."

Right.  Because that's what I spend my time doing, along with teaching kids the parts of the cell and how the digestive tract works, in the hopes that they'll learn it well enough that they'll pass the state exams so I'll get a passing grade and actually have a job next year.  In all my spare time, I'm indoctrinating my students into godless paganism.

Whatever the hell that is.

You know, I think part of the problem here is that we're taught, in church, to listen to the leaders and mostly accept what they say.  I was raised Roman Catholic, and that was certainly my parents' approach; unless the priest did something to indicate that he really had gone off his rocker, you were supposed to just kind of sit there and listen and nod.  But I think the time has come that good, sensible Christians need to say to some of these leaders, "You are talking complete rubbish."  Better still, stop sending them money, and allowing these wingnuts to live a lavish lifestyle.  Because however they yammer on about what Jesus said and what Jesus wants people to do, evidently Jesus's comment about "give everything you have to the poor and follow me" never really sunk in.  Take John Hagee, the Texas pastor I wrote about a few days ago who claimed that the lunar eclipse was a sign of the End Times; his salary last year is estimated at $840,000, and he lives on a "$2.1 million 7,969-acre ranch outside Brackettville, with five lodges, including a 'main lodge' and a gun locker.  It also includes a manager's house, a smokehouse, a skeet range and three barns."

Not exactly emulating the Poverty of Christ, there, are you, Reverend Hagee?

Anyhow.  I know I'm to be expected to be critical, being an atheist and all, but what really galls me is that most of the Christians I know are as disgusted by these crazy pronouncements and royal lifestyles as I am, and so few of them seem motivated to do anything about it.  The problem is, I can't do much to fight this myself; as I said in a recent post, being an atheist is a one-way ticket to being completely powerless politically (despite what Franklin Graham would say to the contrary).  But if these nutjobs' constituencies and congregations stood up and said, "Look, knock it off, or we're cutting the purse strings," maybe they'd listen.

Well, most of them.  I doubt Pat Robertson would.  Anyone who thinks that Hershey's Inc. hires witches to curse Halloween candy is probably beyond help no matter what.
Posted by Gordon Bonnet at 2:19 AM