New from the "Tempest In A Teapot" department, we had an announcement on Thursday that the fragment of papyrus that mentions Jesus's wife was not a modern forgery. 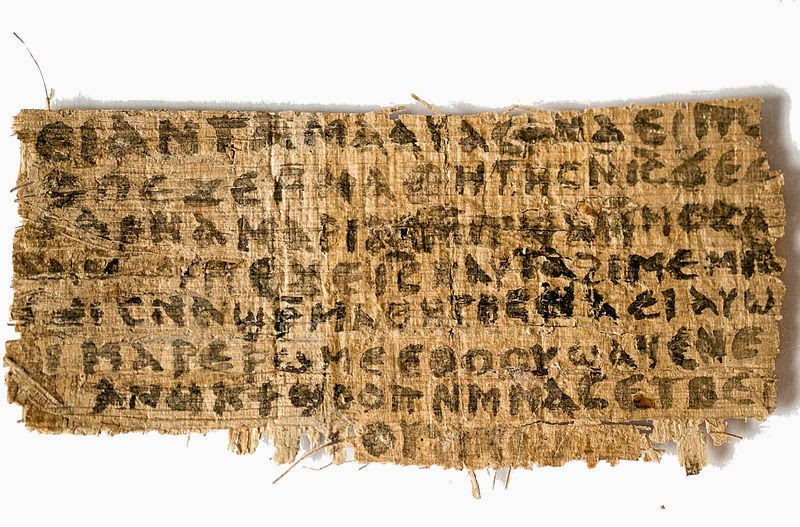 Predictably, the hue and cry started almost immediately, especially after historian Karen King of Harvard Divinity School, who brought the papyrus to light last year, stated, "The main point of the [fragment] is simply to affirm that women who are wives and mothers can be Jesus’s disciples."

Some were in favor of the whole thing.  Hal Taussig, of Union Divinity School, said that the idea of Jesus not being celibate would be a "huge shift."  "This is where people will take the most offense," he said.  "But for many married people, this might make Jesus feel closer."

Then there were the ones who started claiming immediately that the woman referred to in the scrap of papyrus was Mary Magdalene, and that therefore "Dan Brown was right."  Evidently not recognizing the fact that The Da Vinci Code is still shelved in the "Fiction" section at Barnes & Noble.

Others, however, were not so sanguine, although only marginally more grounded in reality.  Reverend James Martin, a prominent Jesuit writer, said, "It’s incredible that the four Gospel writers wouldn’t have mentioned Jesus’s wife if he had one.  They mentioned everyone else in his family.  There are Gospels that talk about Jesus turning stones into birds...  [F]unnily enough, the people who are quick to accept the veracity of this appear to be liberal Christians who question the veracity of other biblical accounts, including that of the Resurrection."

Reverend Henry Wansbrough, English biblical scholar and Prior of the Cathedral of Norwich, echoed Martin's sentiments.  "It will not have a great deal of importance for the Christian church.  It will show that there was a group who had these beliefs in the second century - Christians or semi-Christians - who perhaps had not reflected enough on the implications of the canonical scriptures - to see that Jesus could not have been married.  It's a historical interest, rather than a faith interest."

Then we have Professor Alberto Camplani, of Sapienza University in Rome, who added that the text "should be read purely symbolically."

What I find funny about all of this is that the fragment doesn't date to the 1st century C. E.; it dates to somewhere between the 6th and 9th centuries, and "possibly even earlier," according to the Harvard Theological Review.  So, at best, the fragment was written four hundred years after Jesus's death.  So it's a little like we had a fragmentary account that said only, "King Henry VIII said to his girlfriend..." and forthwith started arguing over whether the phrase was referring to Anne Boleyn, with others commenting that no, it can't mean that, that it wasn't referring to Boleyn but to another woman, who, by the way, had nice legs and spoke with a French accent, and yet others who claimed that the phrase was entirely metaphorical in nature and that "Henry's girlfriend" referred to the country of England.

Given that, it's no wonder that Ben Witherington, Professor of New Testament Interpretation at Asbury Theological Seminary, said that the papyrus was not a "game changer" with respect to belief and biblical understanding.  Of course it isn't.  People have come to the conclusions they have -- whether Jesus likes gays or is pro-welfare or would have been in favor of the Iraq War or thinks that premarital sex is verboten -- by cherry-picking whatever biblical quotes seem to support the point of view they already had.  Because a big, complex, internally inconsistent document like the bible, that has been translated and copied and retranslated and recopied hundreds of times, and which in any case reflected the changing beliefs of a bunch of Middle Eastern mostly-illiterates over a period of perhaps two thousand years, is bound to contain support for damn near any worldview you happen to have, whether you are a bleeding-heart liberal tree-hugger or a steely-eyed close-the-borders conservative.

So if you come to understanding a different way than science, you can end up wherever you want, really.  The science says that the document isn't a forgery, and dates to somewhere around 1,400 years ago; the linguistic analysis gives us an idea of what the Coptic text said.  And that is all.  After that, if you want more, you have to leave the realm of rational, evidence-based understanding.  But it you do that, you can take the results and spin it whichever direction suits your fancy.

Which is mostly what people do anyhow.  So business as usual, I guess.
Posted by Gordon Bonnet at 4:32 AM