The king's name is a tower of strength...

As regular readers know, I'm not particularly impressed at this point by the evidence that's been brought to bear in cases of alleged hauntings.  It's not that I'm saying it's impossible, mind you; it's just that we lack the two things that a skeptic would require: (1) hard evidence, for which a ghostly presence is the best explanation; or failing that, (2) a plausible mechanism by which spirit survival could occur.

Neither of these has yet been demonstrated.

Take, for example, the claim earlier this week that some spiritualists in England were contacted by a spirit who may have been King Richard III.  (The spiritualists were careful to say that it may not have been the Hunchback King himself, but someone else named Richard.  There are, after all, lots of Richards out there.) 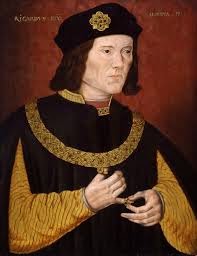 Medium Gill Hibbert was with a group in Donington le Heath Manor House, the place where King Richard spent his last night before riding out to his death in Bosworth Field in 1485, and they were using a "ghost box" that allegedly "allows spirits to speak through white noise."

So if you listen to the clip on the link provided above -- which I would prefer you do with your eyes closed, for reasons I'll describe in a moment -- you first hear nothing but crackles and static, and then you allegedly hear the ghost speaking a single word.

Now, here's the difficulty.  On the recording, there is captioning that tells you what the ghost is supposedly saying.  And therein lies the problem.  Because if someone tells you what you're hearing, it becomes almost impossible not to hear it.  Take, for example, this wonderful "Misheard Lyrics" version of the classic Orff choral piece "O Fortuna," from Carmina Burana:

I know a good bit of Latin, and when I watch this video, I find myself unable to hear anything but the rather twisted English version (I still guffaw at "Salsa cookies!  Windmill cookies!  They give you gonorrhea!").  So once the ghost hunters tell you what you're listening for in the white noise, they've biased you to hear it.

Still, they heard it when they first recorded it, right?  But remember, they already had an idea about what they were hoping the ghost would say.  And given that, is it any surprise that they picked out that particular word?  It's what they expected to hear -- which is the exact definition of confirmation bias.

So, okay, maybe it was King Richard III, hanging around the premises 530-odd years after his death, for some reason.  Seems like an odd thing to do -- if I was a spirit, I'd probably head off to Maui or Belize or somewhere, rather than haunting the place where I was hunted down by hostile knights and then gutted like a fish and left to die on the battlefield.  But to each his own, I suppose.  And I need more evidence than this to come to that conclusion.

Because this recording isn't doing much for me, honestly.  Hibbert et al. say they're going to turn the recording over to professionals to have it analyzed further, which is a good idea, but even if it turns out that it was a human voice, it very much remains to be seen that it was a ghost's.

So at the moment, I'm putting this into the "Interesting but unconvincing" category.  Once we have a ghost show up, in full view, preferably in broad daylight, and tell us some verifiable piece of information that no one in the room had any way to know ahead of time, then I'll be convinced.  Until then, I'm going with the "Suck juice from moose" explanation.
Posted by Gordon Bonnet at 3:31 AM