My younger son came down to visit this weekend, and we got to talking about cults.

I'm not sure what brought the topic up; with the two of us, odd discussions don't take much in the way of impetus.  Our conversations run the gamut, from art to music to quantum physics to politics to how to grow vegetables.  But after a while, he asked, "So, have you heard about the guy who is the Russian answer to Jesus?"

I said that I'd heard of the Australian Jesus, but I must have missed the memo about the Russian one.  In fact, I was rather surprised that there were multiple Jesi out there.  You'd think that there'd only be one at a time, considering who he supposedly is.  But my son said that yes, there was a Russian one, and he was one interesting dude.

So he proceeded to tell me about Vissarion, born Sergey Anatolyevich Torop, who was a soldier in the Soviet army, and later a patrol officer, before having a vision in 1990 and realizing that he was the reincarnation of Jesus (the original one).  He wrote something called The Last Testament of Christ, which seems to combine New Age ideas with Christianity and various stuff from out in left field (his teachings include bits about aliens and spaceships, for example).  Then he went out into the Siberian taiga, near the village of Petropavlovka, and started a settlement called Tiberkul which he set up to run on the principles of his sect. 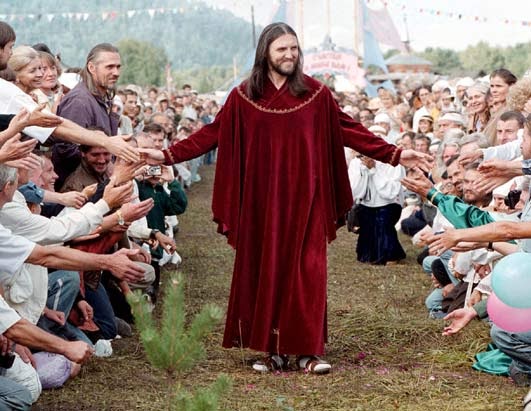 We watched a Vice.com video, which you should all take a look at (it's about 25 minutes long, but well worth the time).  Both my son and I had the same basic responses to it, which can be boiled down to the following:

But what strikes me most is to wonder how people could make the choice to embrace this cult -- for cult it is, however innocuous it may appear at first.  I cannot imagine what catastrophe in my personal life could impel me to abandon what I have and flee into the wilderness to become one of this man's adoring throng.  You may be gaining a community, a sense of purpose, a feeling of connection to a higher spiritual plane; but the cost is your autonomy.  You have to follow Vissarion's rules; amongst them, veganism, abstaining from alcohol, refraining from the use of money and the ownership of goods.  I don't doubt that breaking any of these would result in censure, possibly expulsion from the community.

And then where would you be?  Can you imagine if you were cut loose, after years of belonging, after you had given away all you had, quit your job, severed your personal connections?  The fear alone would keep many obedient -- which is no doubt Vissarion's intent.

So they continue to have their dances and play the recorders and guitars and sing songs of praise to their Messiah.  What choice do they really have?

I don't know what, if anything, should be done about groups like this; ostensibly, they cause no harm. But at its basis, Vissarion is promoting a false doctrine.  Whatever the "Russian Jesus" may be -- huckster, psychopath, guru, or some combination of the three -- he is indoctrinating these people in a counterfactual worldview, with its foolishness about alien guides and the End Times approaching.  And however messy and unpleasant life in the real world can get, I don't understand anyone trading it, along with their autonomy, for a place in Vissarion's holy village.
Posted by Gordon Bonnet at 2:15 AM