Astrophysicists talk about the process of accretion, where microscopic particles of dust and ice stick together (largely through electrostatic attraction), leading to the formation of disks of matter around the parent star than can eventually form planets.  As the clumps of dust get larger, so does their gravitational attraction to nearby clumps -- so they grow, and grow, and grow.

One person notices one thing -- very likely something natural, accidental, minor, insignificant -- and points it out.  Others begin to notice other, similar phenomena, and stick those to the original observation, whether or not there is any real connection.  And as the number of accreted ideas grows, so does the likelihood of attracting other ideas, and soon you have a full-blown gas giant of craziness.

It seems to be, for example, how the whole nonsense about "chemtrails" started.  A reporter for KSLA News (Shreveport, Louisiana) in 2007 was investigating a report of "an unusually persistent jet contrail," and found that a man in the area had "collected dew in bowls" after he saw the contrail.  The station had the water in the bowls analyzed, and reported that it contained 6.8 parts per million of the heavy metal barium -- dangerously high concentrations.  The problem is, the reporter got the concentration wrong by a factor of a hundred -- it was 68 parts per billion, which is right in the normal range for water from natural sources (especially water collected in a glazed ceramic bowl, because ceramic glazes often contain barium as a flux).  But the error was overlooked, or (worse) explained away post hoc as a government coverup.  The barium was at dangerous concentrations, people said.  And it came from the contrail.  Which might contain all sorts of other things that they're not telling you about.

And thus were "chemtrails" born.

It seems like in the last couple of months, we're seeing the birth of a new conspiracy theory, as if we needed another one.  Back in 2011, I started seeing stories about the Yellowstone Supervolcano, and how we were "overdue for an eruption" (implying that volcanoes operate on some kind of timetable).  At first, it was just in dubiously reliable places like LiveScience, but eventually other, better sources got involved, probably as a reaction to people demanding information on what seemed like a dire threat.  No, the geologists said, there's no cause for worry.  There's no indication that the caldera is going to erupt any time soon.  Yes, the place is geologically active, venting steam and gases, but there is no particular reason to be alarmed, because volcanoes do that.

Then, last month, we had people who panicked when they saw a video clip of bison running about, and became convinced that the bison had sensed an eruption coming and were "fleeing the park in terror."  And once again, we had to speak soothingly to the panicked individuals, reassuring them that bison are prone to roaming about even when not prompted to do so by a volcano (cf. the lyrics to "Home on the Range," wherein the singer wishes for "a home where the buffalo roam," despite the fact that such a home would probably face animal dander issues on a scale even we dog owners can't begin to imagine). 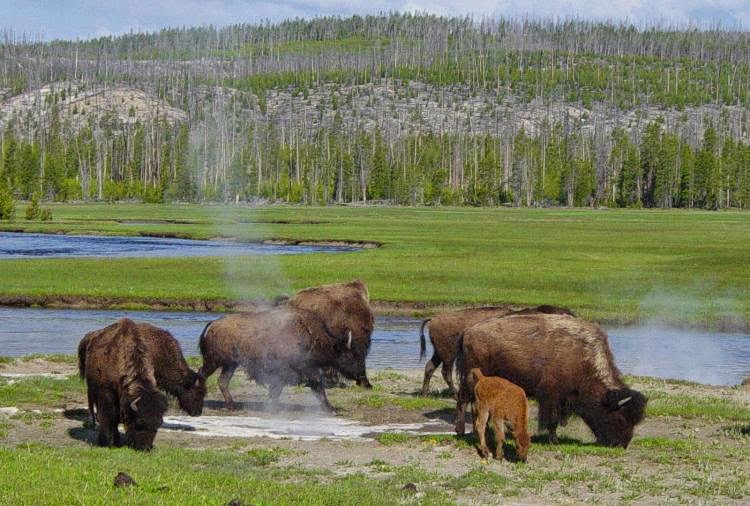 [image courtesy of photographer Daniel Mayer and the Wikimedia Commons]

But the accretion wasn't done yet.  The bison were too running from the volcano, people said.  So were the elk.  And then the real crazies got involved, and said that the government was already beginning to evacuate people from a wide region around Yellowstone, and relocating them to FEMA camps where they are cut off from communicating with anyone.  And when there was an explosion and fire at a gas processing plant in Opal, Wyoming two weeks ago, 150 miles from Yellowstone, and the whole town was evacuated, the conspiracy theorists went nuts.  This is it, they said.  It's starting.  The government is getting people out, because they know the whole freakin' place is going to explode.

Never mind the fact that the residents of Opal were all allowed back two days later, once the fire was under control.  Facts never seem to matter much, with this crowd.

So once again, the scientists are trying to pour oil on the waters.  An article in Wired yesterday describes recent research by an actual geologist (i.e. not just some crank with a videocamera) that has shown that the magma beneath the Yellowstone Caldera is mostly a semisolid, and is far below the threshold of 40% liquefaction that most volcanologists think is necessary for an eruption.  And we're not talking about some hand-waving layperson's "the volcano is overdue for an eruption" foolishness; this is a peer-reviewed technical study that merited publication in the prestigious journal Geophysical Research Letters.  And about the conspiracy theorists, the article in Wired minces no words at all:


As usual, people are trying to rabble rouse when it comes to the Yellowstone Caldera. All these rumors that the government is trying to hide evidence of an impending eruption are pure fantasy, but that doesn’t stop some people from acting out their delusions to the detriment of others who fall prey to this misinformation. Yes, the Yellowstone Caldera is a massive volcano that has the potential to produce huge eruptions, but no, there are no indications right now that any sort of eruption will happen any time soon — and I’d be surprised if we see an eruption in our lifetime (just like any volcano that hasn’t had a confirmed eruption in the last ~70,000 years).

Of course, this will probably turn out to be shouting into a vacuum, as arguing with conspiracy theorists usually turns out to be.  Witness the fact that despite all of the research and debunking of chemtrails, the whole thing still has a considerable cadre of true believers, who claim that anyone who argues to the contrary is a blind fool at best and an evil shill at worst.

So look for more Yellowstone paranoia to be zinging about the interwebz over the next few weeks.  As for me, I'm grabbing the fleeing bison by the horns and going to Yellowstone in July.  We'll see if there's anything to all the hype.  I'm hoping to do some sightseeing and birdwatching and hiking, and simultaneously hoping not to be killed in a massive volcanic eruption or shot by a FEMA operative or hustled away into some godforsaken refugee camp.

Always the optimist, that's me.