Cliven Bundy and the rule of law

A couple of days ago, we considered the conspiracy theorists phenomenon as a gauge of the "dumbing down" of America.  So many of the things they believe -- from chemtrails to the various anti-vaxx claims to FEMA stockpiling guillotines for use on American citizens -- require a dazzling array of ignorance and specious thinking.  To buy what the conspiracy theorists are peddling, not only do you have to ignore what we know about science, you pretty much have to jettison hard evidence and inductive reasoning as a means for understanding.

Today I want to consider a darker side to the whole thing -- that conspiracy theories are an indicator of something far deeper, and far worse, than simple stupidity.  Conspiracy theories come about not only from ignorance, but from fear, paranoia, and a deep-seated rage.

Bundy, as most you probably already know, is the Nevada cattle rancher who fell afoul of the Bureau of Land Management when it came out that he'd been grazing his cattle on public land for decades without paying the requisite lease fees.  When the BLM came after him, Bundy turned it into a David-vs.-Goliath struggle, with the BLM and the federal government cast as the giant who was gonna end up with a rock to the head if they didn't watch their step.  Right wingers, especially the Tea Party, took up his anti-government cry -- despite the fact that these same politicians shriek on nearly a daily basis about "welfare cheats," who (like Bundy) are stealing from the federal coffers.

Be that as it may, Bundy proceeded to assemble a ragtag band of defenders, including the far-right nutjobs who call themselves the "Oath Keepers," some members of the Sovereign Citizens Movement, and various other self-styled "Patriots."  The whole thing began to shake itself apart when internal dissent in the ranks nearly had Bundy's defenders at each other's throats, not to mention when Bundy revealed himself as a racist (in an interview, he said outright that African Americans had been better off as slaves) and a liar (he claimed to have "ancestral rights" to the land dating back to the 1870s, and it turned out that land records proved that his family bought the ranch he lives on in 1948).

Bundy's reach was more pervasive than the battle over grazing rights, however.  His defiance seems to have given some inspiration to like-minded types, to judge by "Operation American Spring," a group of Bundy-clones who planned to descend upon Washington D.C. "ten million strong," intending to stay there until President Obama resigns or is overthrown.  The problem is, the estimate turned out to be off by 9,999,850 or so, because the Mall (where they had intended to stage their massive protest) was empty except for a few placard-carrying protestors who were mostly ignored by passersby. 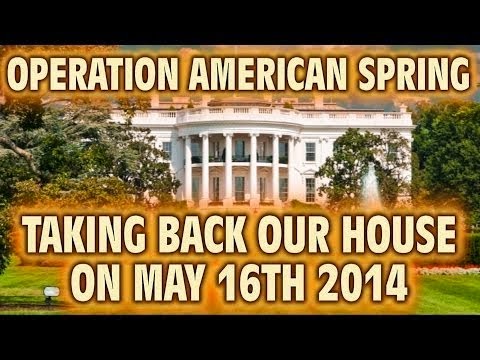 It's easy to laugh at this -- one wag on Twitter quipped, "Drone hustling, shape-shifting Socialist/Kenyan dictators don't scare me...but that clammy drizzle was too much!"  The hashtag #AmericanSpringExcuses quickly trended, generating tweets like, "Put hood on backwards, ran into a tree which was put there by liberal fascist socialist dictators. #AmericanSpringExcuses."   And I certainly was laughing along with them.

But to laugh and then dismiss the more serious aspect of this is, I think, a terrible mistake.  Take what was said by one of the nutcases who showed up in D. C. for what turned into Operation Epic Fail: "This is the America that you all live in today, and it has to end.  I’m telling you right now, it’s going to take — in my view — a little blood, it’s going to happen, this day is coming and you better be willing to pay for it."

How is it that our leaders don't see people like Bundy and the nameless protestor in Washington for what they are -- domestic terrorists?  Look, it's not that I think the government is perfect; it can be inept, wasteful, bumbling, and occasionally cross the line into evil.  But do you really want to jettison it entirely?  Anarchy isn't pretty; ask anyone who has lived in Sudan, Ethiopia, or Somalia.  When people become "sovereign citizens" they usually respond by victimizing each other, and the strongest victimizer becomes the leader -- and you're right back to having a government, although one I doubt any of us would want to live in.  Notwithstanding its faults, our federal and state governments provide us with education, infrastructure, commerce, and security.

Not just no, but hell no.

By ignoring Bundy and his ilk, or just considering them inept clowns who can't even run a demonstration right, we are potentially overlooking the next David Koresh or Timothy McVeigh.  I know that officials have to act carefully, because these people don't mind spilling blood; their attitude is that if innocent people die in their attempt to achieve their goals, that is simply too bad.  And the likelihood of any misstep turning into further fuel for the fire (and any deaths amongst the militiamen being seen as martyrdom) is high.

But why is law enforcement in Nevada turning a blind eye to what these folks are doing -- acts that now include armed militia members setting up checkpoints along roads in Clark County and demanding identification from drivers proving that they live in the area?  Hotel owners in the nearby town of Mesquite received credible bomb threats when it was discovered that they had rented rooms to BLM employees during the standoff.  A federal livestock wrangler was menaced on Interstate 15, in broad daylight, by men wearing hoods and brandishing a Glock -- along with a handwritten sign saying, "You need to die."

I recognize the danger, here.  Officials in Nevada and Utah are dealing with violent lunatics who are heavily armed and unafraid to use deadly force.  They are also propelled by an ideology that is, at its basis, steeped in counterfactual paranoia, in part fostered by the divisive "America is being murdered!" rhetoric you hear from pundits on the far right.

But you reap what you sow, a lesson that the Rush Limbaughs and Glenn Becks and Sean Hannitys and Pat Buchanans have yet to learn.  If you create a climate in which patriotic Americans feel threatened and besieged, some of them will respond with a preemptive strike.  If you continually portray the government as evil and dangerous, you will spawn individuals who consider it virtuous to overthrow it.

Order, justice, democracy, and the rule of law may not always work.  They fail, they falter, just like any other human-made institution.  But they're the best thing we have for protecting us against the baser instincts of our neighbors.  And I'll take that over the morals and ethics of the likes of Cliven Bundy any day.
Posted by Gordon Bonnet at 2:16 AM